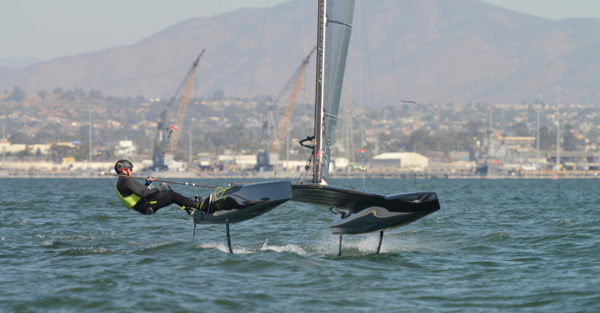 The 50th Anniversary of the A-Class North American Championship was held in San Diego Bay on Oct. 5-8. Hosted by San Diego Yacht Club, the event was held on the Silver Strand State Beach which is halfway down Coronado Island. The sailing area was well protected with flat water and great racing conditions for the Classics and Foilers alike.

San Diego is a long way from the larger East Coast fleets in the US, but the A Catters saddled up and headed west to support the Californians. We had 32 boats racing from all over, including Mischa and Eduard from the Netherlands, Larry Woods from the Toronto area, a container load from New Jersey, a 6 boat trailer from Atlanta, and many smaller rigs coming from Florida, Louisiana, Texas and all over.

Ben Hall a.k.a. “The Admiral” drove 2,500 miles with Bill Vining from Tampa, Florida to get three boats from the Sopot Worlds there just in time, and he wasn’t even sailing! It was another good example of the quality of people in the A Class.

Due to the flooding in Houston from Hurricane Harvey, there was a fair bit of debris in the water at home. My training partner Benn Hooper and I decided to head out early to sail in San Diego to keep the boats in one piece. We drove 24 hours straight through and sailed for 6 days prior to the event. Mischa joined us and we spent a lot of time on setup and techniques to maximize our performance, with Benn in the Classic as a good benchmark.

Ben was on his recently modified Classic LR5 with the long leech version of Mischa’s Decksweeper, while Mischa and I pushed the F1’s with a smaller head design. It was a bit of a gamble in the short term as San Diego is not thought of as a windy venue, and conventional wisdom pointed to light airs being the Achilles heel of a small headed sail. It was great testing though and the new sails performed well across the range.

As always when I get the opportunity to train early with good people before a championship, I could pack up and go home the night before the regatta and be perfectly happy, as I find it really satisfying to learn so much and progress in how to sail these amazing boats.

After some good battles with Mischa and Matt, I was fortunate enough to come away as North American Champion…

We pulled off the regatta with Foiling conditions throughout, except for small sections of a leg or two. The breeze was on average 7-12 knots, some less and more on the last day. There was only a bit of short chop on the last day near the bottom when the breeze was up in the mid-teens. The pressure was always changing just a little bit throughout the trip, so you really had to stay on your toes with the mode and setting changes. Often times you weren’t in exactly the ‘perfect’ setting, so learning to keep the boat ripping while managing that aspect was a big part of the regatta.

The SDYC Race Committee did a great job getting off 11 good races over four days. They kept us apprised of their intentions and were great with communication, which we all appreciate.

The battle for the Classics division was never over, with a different leader at the end of each day. Craig Yandow came out on top, and there were a lot of tight finishes across the line throughout the week. Great to see some new energy in that group and I believe the US will send a good Classic contingent to Australia for the Worlds.

Matt Struble sailed a solid event in the eXploder I used in Poland, and thank you again to Emmanuel Cerf from eXploder USA for helping me at the Worlds and Matt here at the NA’s. Emmanuel is a great promoter of the class, and motivates our sailors to get to our events. He is the man behind the 2020 Worlds in St. Petersburg, Florida. Be sure to put that on your long term planning, as it will be truly first class.

Mischa won the event as Open Champion, with his blazing speed and complete command of the boat. It was great to have another fun mission with him, and we hope in the future to have more international competitors here to raise the level even higher. The perpetual trophy for the Open Champion has gone missing (if you have it, send it back…), so the Regatta Organizers did a cool thing with a Multihull Elapsed Time Trophy that they award each year. By their reckoning, having won 9 of 11 races means Mischa completed the regatta in the lowest elapsed time, so his name is now on the trophy with ORMA 60’s and other offshore Multihulls.

After some good battles with Mischa and Matt, I was fortunate enough to come away as North American Champion, and looking at the trophy my 2 wins pale in comparison to the multiple winners over the 50 year history of the class in the US. The trophy has the winning skipper and boat type which we will post shortly on our US Class website. Apparently even Hurricane Andrew has a victory in 1992, but no boat type was listed. It’s pretty cool to think for half a century A Cat sailors have been throwing boats on trailers and traveling around the country for the fun of it. I’m happy to be one of them.

The 2018 North Americans will be at the Sandy Hook Bay Catamaran Club in New Jersey. The club is just across the water from New York City and has hosted the Atlantic Coast Championships the past few years. It should be a great event. From there the US Fleet will be loading containers to head down under to Hervey Bay for the 2018 Worlds. Come and join us!