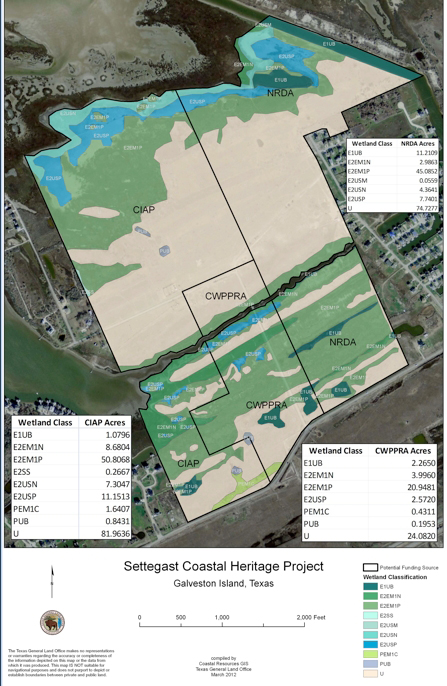 With Galveston’s new home builds reaching a 10-year high in 2014, one organization is making sure that limited space on the island is left in a natural state for wildlife to thrive and future generations to enjoy.  In March, Artist Boat celebrated a victory when they dedicated the 367-acre Coastal Heritage Preserve off Settegast Road on the island’s West Bay.  It’s been an eight-year effort for the Galveston-based non-profit known for its eco-art kayak tours.  But, the effort paid off handsomely.  With so much competition for land, this is one of the island’s last large tracts, and a protected parcel only superseded in size by Galveston Island State Park.  For Artist Boat, it’s more than an outdoor classroom.

“I’ve been birding on Settegast Road for 19 years,” says Artist Boat’s founder and executive director Karla Klay.  “There’s no other place like this on the island.”

Flanked on two sides by new homes and channelized subdivisions, the Coastal Heritage Preserve contains four distinct coastal habitats.  Klay describes it like “somebody cut a window in the ecosystem.”

There’s 136 acres of salt marsh, 33 acres of tidal flats, 17 acres of estuarine and fresh water habitats, and an upland produced by coastal dune swales and ridges where one can experience a three-inch change in elevation.  From one of these ridges, Texas City is visible in the distance.

For Ted Lee Eubanks, who practices the valuing of natural assets through his company, Fermata, Inc., the Coastal Heritage Preserve represents what Galveston used to be like before development.  “It’s a good place to see the island’s natural heritage.  A lot of the original topography is still in place.”

While most large tracts on the island have become fragmented by development, the absence of roads, right-of-ways and utility lines on the Coastal Heritage Preserve allows migration between the four habitats, connecting nature’s network into a healthier system, allowing unusual species to exist.  Species like the Curved-billed Thrasher.

Eubanks was drawn to this spot in the early 1970’s on a tip that someone had seen the bird.  The unusual note about this is that Curved-billed Thrashers are not known to inhabit coastal marshes and uplands.  They’re most common in the thorny deserts of Mexico, west Texas, southern New Mexico and southern Arizona.  They are also long-term residents, staying in a specific spot for years.  Eubanks noticed this about the bird he observed.  “I’ve visited that land for years,” says Eubanks, “and he was always there along the prickly pears.”  Since it’s only one of two Curved-billed Thrashers Eubanks has ever seen on the Upper Texas Coast, he calls this residency “pretty remarkable.  Things like that seem to happen on that property.”

Yet, convincing the new owners of the land’s natural value was a more artful task.  They had plans to build a marina and an 800-unit channelized residential community.  While some islanders chose to engage in litigation, Klay and Artist Boat’s board chose to show Marquette Cos. of Chicago what an incomparable natural asset they had.  One evening in May 2008, Klay took Marquette’s Darrin Sloniger to a high point on the property to experience its beauty and vast overview.  In the distance they heard pilings being driven in the ground.  “What is that terrible noise?” asked Sloniger.  “That’s the noise you’re going to make for the next 25 years if you develop this land,” answered Klay.  She says now, “Thank God I was showing him his land through my eyes.”

Even though an appreciative relationship started that evening, Marquette held to the asking price of $15 million for the 367 acres.  That sum far exceeded any amount ever raised by the small non-profit.

Then, four months later, Nature and Wall Street played in Artist Boat’s favor: in September, Hurricane Ike devastated Galveston, followed by the collapse of the U.S. housing market in November.  Suddenly, setting aside the large tract made good business sense to Marquette.  They gave Artist Boat time to seek funding, receive three major grants from state, federal and other sources, and secure the 367 acres for $7.7 million.

Artist Boat’s prize for hard work and not giving up now moves into the bigger task of restoration and management.  First, the land needs to regain its balance.

Prairie grasses, which were grazed to the point that the invasive Baccharis and Western Rag Weed took over, need a chance to come back.  Nate Johnson, in charge of habitat and stewardship for Artist Boat, hopes to provide those conditions with the help of volunteers who can remove the competitive invasives, allow the land to restore itself, and start native seedlings where needed.  With the land just now under Artist Boat’s care, the full extent of species has yet to be listed.  But for now, Johnson estimates that no less than 300 species exist on the Coastal Heritage Preserve.  That, alone, is plenty to learn from for years to come, and enough subject matter to fill a sketchbook.

To support Artist Boat and their habitat restoration projects, or to book a kayak tour, visit www.artistboat.org.