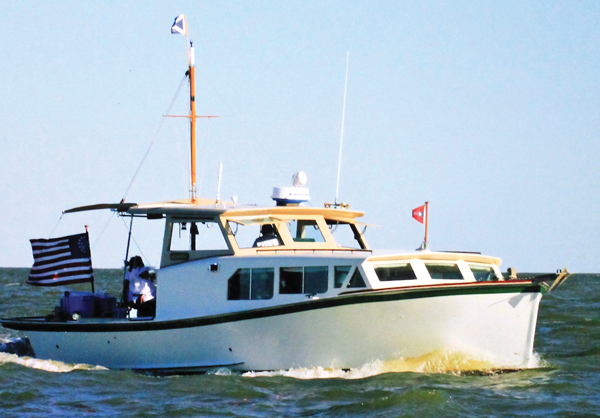 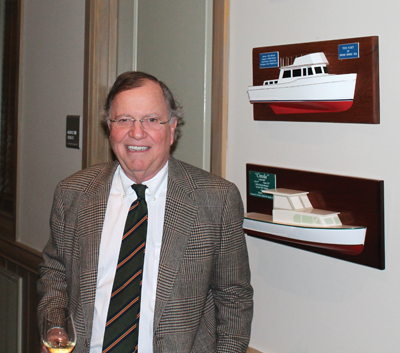 Tony Smythe next to the models of Creola and Salerosa that hang up in the Texas Corinthian Yacht Club.

The Grand Dame of the Gulf Coast

Long time yacht broker Tony Smythe loves being around boats. He was kind enough to share his thoughts on why he rescued this classic wooden boat. She is a beauty and if you want to get a closer look be sure to check her out at this year’s Keels and Wheels Classic Car and Boat Show May 3 and 4 at Lakewood Yacht Club.

GCM: When did you first see Creola?

When living in New Orleans I had a Grand Banks 32 that I took to Lafitte, south of the city on Bayou Barataria where she was our hunting camp during duck season. Although Creola lay wilting in a covered shed in the same marina where I first saw her, it was love at first sight. Even then I saw lots of potential.

GCM: Tell us about the boat’s history.

She is the creation of Emil “Bill” Dufrene, a true bayou Cajun who was the originator of the Lafitte Skiff. He hand crafted a boat that revolutionized commercial fishing in Louisiana. Prior to his Lafitte skiffs, fisherman spent days shrimping on their 5-7 knot “Luggers”, plying the bayous far from home. Then came Dufrene who in the late 40’s put more speed into his boats that brought their fishing grounds within a day’s run.

GCM: What is it you really like about the Lafitte skiffs?

In Louisiana, Dufrene’s skiffs are legendary. I became aware of him from several friends at Southern who owned his boats. They were all built of hand-picked, aged cypress and were butt-planked using no caulking. Dufrene was ahead of his time. Most production boats, like Chris Craft and Mathews in that era were narrow-beamed and round-chined. Dufrene built his with hard chines and beamy, providing more room and stability. She also has wide side decks unlike the production boats.

GCM: How and why did you end up with her?

In December of 1992, during a return trip to Southern, a friend told me the 37 foot I knew in Lafitte was for sale. I don’t really know why I bought her as I was happy with Salerosa, our Grand Banks 42. Paint was peeling off but structurally she was as sound as the day she rolled off the “ways” on the bayou. She was a damsel in distress and I was just too smitten with her.

GCM: Tell us about the restoration of Creola.

I repowered her in New Orleans with new diesels and we ran her back on her own bottoms to HYC. The restoration took nine months with a deadline of taking her to the Madisonville Wooden Boat Festival. Bernt Womack was the main man to tackle the project with my old friend Tim Strong as his able assistant and Len Kirkham as shipwright. I knew immediately the interior layout would not work, so we gutted her inside and I laid her out to my own design with input from Bernt and Tim.

GCM: How have you used Creola?

Creola has given me the opportunity to run the waterways, bayous and bays with more speed than the Grand Banks 42, so I’ve covered more cruising and fishing grounds in shorter time. I’ve cruised her extensively in Texas and Louisiana, especially gathering research for THE TEXAS/LOUISIANA COASTAL CRUISING GUIDE. We have even trucked her to Hinckley’s yard in Maine. In 2001 we cruised from Maine to Long Island Sound and then trucked her back home. She has played the perfect committee boat for local regattas as well as many national championships hosted by TCYC and HYC.

With the Lafitte trademark being the overhanging fantail, the curious northern yachtsmen asked me what exactly she was. My reply was simple, she’s a Coon-ass lobster boat. That must have made Dufrene smile.