How to Energize and Feed Your Racing Crew 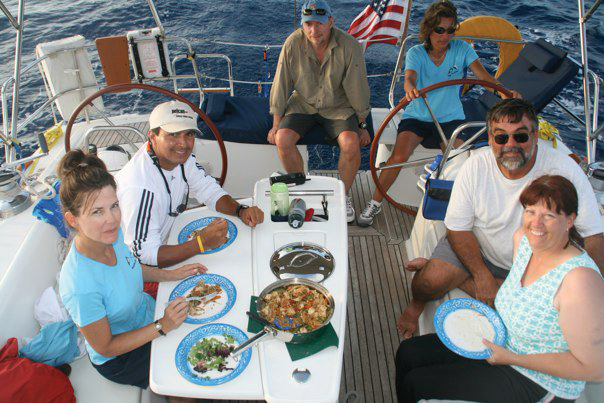 The crew of the Sea-quell takes a moment to sit and eat.

There is a balance in planning the meals for your racing crew.  The competitor in you wants to make sure everyone is fueled up and ready for duty.  The host in you wants the food to be appetizing and as fresh as possible.  The medic in you knows that certain foods may contribute to seasickness.  So we went to Bay Area Houston boat owner and race champion, Susan Setters, and asked for her tips and tools of the trade.

In 2009 and 2011, Susan and her husband, Audie Setters, raced their 46 foot 2007 Beneteau sailboat in the “Race to the Border” that sails from Galveston to South Padre Island, www.racetotheborder.com.  “We learned a lot on these races, and had a variety of crew members both times,” says Susan.  They sailed the “Regatta de Amigos” in 2008, and came in First Place in 2010, “Cruising Non-Spinnaker” class.

“The very first requirement in choosing your Chief steward/Chief cook for a race is to choose someone who doesn’t get seasick, ” says Susan.  “Thank God I don’t get seasick, so it’s always been my job.  Cooking becomes entertainment during a race where you don’t see land for days,” says Susan. Not everyone can take the hot, swaying kitchen, so Susan hands up food that needs to be chopped or peeled so the crew can help on deck.  A meal for seven is prepped by direction, completed in the galley, and passed around up on deck, usually in bowls because food flies off your plate in the wind.

“Plan meals for seven days, if you are out for a five day race,” says Susan, “you might have days of no wind.”  Hot meals at night are important.  Susan gives several ideas for main dish meals you can buy pre-cooked and frozen. “Guys like meat, so frozen packages of pre-cooked fajita meat from Costco can be added to onions and peppers cooked on the stove and served on tortillas,” says Susan.  “Sam’s Club has a barbeque roast that is outstanding, and chicken spaghetti is another great choice, just stay away from very spicy foods.”

Sandwiches, chips, and fruit make up lunch, and are easy prep and handling.  For breakfast, a favorite is Jimmy Dean Breakfast Skillet bought pre-made at Walmart and cooked with eggs.  Susan has a creative way to make coffee as the boat sways, and that’s by putting the drip coffeemaker on the stove which can be unlocked, to rock with the boat, and not spill or go flying off the counter.  Brownies and cookies are fun to bake on board, smell good, and are a good way to break up the long days at sea.  The only alcoholic beverage is champagne to be consumed upon finishing the race at your final destination.

Susan talks about assigning colored water bottles to each crew member to cut down on waste, stacking used paper plates and all trash densely.  Food is planned to eat in order, fresh food first, eating foods as they thaw, limiting the crew on what they can bring due to space and weight.  Power bars are invaluable as are ginger cookies and ginger ale.

Susan and Audie currently live between Singapore and their Bay Area Houston residence at the Endeavour with a three-sided view of Clear Lake and Kemah.  Their sailboat is currently for sale, and can be viewed at www.littleyachtsales.com, click on Sailboats, View Inventory, 46 ‘ Beneteau.  Their next boat will be a catamaran, perhaps on the Caribbean.