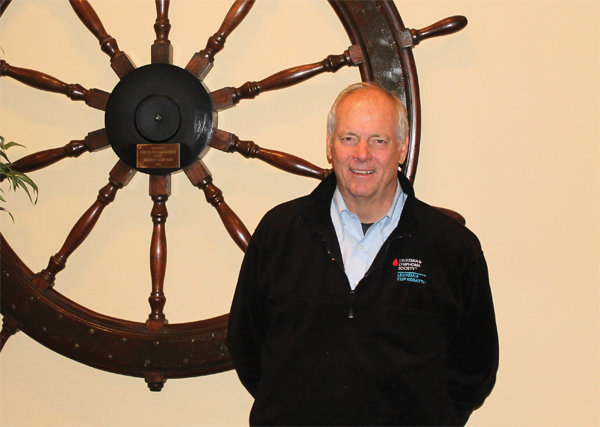 Gary Jobson is a husband, a father, a cancer survivor, a really good guy and did I mention he is a world class sailor?

I’m sure he has an ego, no one could get to where he is in his profession without the drive to succeed, but you wouldn’t know it by talking with him. He cares about our sport and he cares about the people around him.

Gary got his big break in 1977 when Ted Turner picked him to be his tactician aboard Courageous, one of three, twelve-meter sailboats vying for a chance to represent the U.S. in the 23rd America’s Cup competition. Courageous, a seasoned twelve meter with surprising speed for an older boat and a young crew, battled all summer long. Underdogs from the start, these guys came together in defeating two other teams and earned the right to sail for their country in the Americas Cup Regatta.

Courageous defeated Australia 4-0 and retained the cup for the U.S. The longest winning streak in history was safe for another couple of years. Gary Jobson, along with Ted Turner, would usher in the sport of sailing for a modern television audience; this would change the sport and his life forever.

Since 1985 Gary has been ESPN’s sailing analyst. He is the voice of sailing in America and a great ambassador for the sport. In 1978 he started Jobson Sailing Inc., which promotes the sport of sailing at all levels through lecture tours, personal appearances, event advertising, as well as broadcast, print, and electronic media.

I caught up with him at this year’s Leukemia Cup kick- off party. He was kind enough to do this interview with us, we hope you like it.

Have you ever raced on Galveston Bay and do you remember the first time you came to Texas?

The first time I raced in Texas was the College Nationals on an inland lake.   I won the Singlehanded Championship, and crewed for the winning Sloop team.  I think our team finished 4th in the Co-ed Nationals. This took place on Eagle Mountain Lake, outside Fort Worth.

I have raced in the Leukemia Cup out of the Houston YC.

Community Sailing Centers can make a difference in a young person’s life. The city of Galveston along with the Sea Scouts, are thinking about building a center. What advice would you give them?

One of the biggest challenges for the sport of sailing is providing access to the water. Community sailing centers, and yacht clubs should make providing that access a high priority. There are many sailing centers around the USA.  Impressively, there is a big push to expand many the existing facilities, and build new ones. My advice is to begin by getting people on the water in similar boats. The sailing center and building can be the second wave of activity. Once you have young people on the water you build your credibility with local government and leaders. I have found that yacht club memberships are very supportive of community sailing centers because they eventually lead to new members.

Sailing in China has grown dramatically. In fact, in 2012 China won a Gold Medal in the Women’s Laser Radial Class. Quingdao has hosted the Volvo Ocean Race. China will become more engaged in sailing as they build marinas and sailing centers.

I know you like going to movies, did you see the Robert Redford movie All is Lost and what have you been too lately?

I enjoyed All is Lost. It was a well acted and shot film. It made you wonder how you might handle a tough situation on the water.

The Americans didn’t win a medal in the last Olympics, what should we do to get back on top of that sailing medal stand?

The USA has had a long run of winning medals in the sailing in the Olympics until 2012. The job going forward to develop coaches as well as sailors. There needs to be more emphasis on generating more boat speed. The US Olympic Sailing Committee is working hard to develop more young sailors from a wider base.  I think the USA can return to winning medals. We should all support our Olympic athletes.

I know you have sailed all over the world. When you get some free time where do you like to go cruising?

I have taken many cruises with my family to Maine, Nova Scotia and around New England. I have also done two Expeditions to Antarctica, one to Cape Horn and another to Spitsbergen (80 degrees North). I like long passages.  I have crossed the Atlantic 6 times on a variety of vessels, both sail and ships.

Have you read any good sailing books lately?

Roger Vaughan just wrote a great book about Harry Anderson called A Strenuous Life published by Mystic Seaport. Harry is going strong at the age of 92, and has experience every level of sailing.

The other day I was watching the Golf Channel, do you think US Sailing will ever have a Sailing Channel?

Sailing will be a popular sport on the internet. Occasionally, we can get it to attract large viewership. The America’s Cup is probably our best event for television.  I have now covered nine America’s Cups. The 2013 conclusion was exciting thanks to the amazing comeback by Oracle Team USA. But, the biggest viewership was Dennis Conner’s victory in Australia in 1987. It was a huge patriotic story.

I read something about Bruce Kirby and Laser in a big lawsuit, can you shed any light on recent developments in that story?

Bruce Kirby is in litigation with Laser Performance. I hope the two parties can settle the dispute. The Laser is wonder boat, that I have raced for over 40 years. I wish it was in the Olympics when I was in my twenties. Bruce is a great sailor and person.

What can the clubs on Galveston Bay do to attract world class Match Racing and Team Racing? Chicago has a great program would those teams come to Texas and compete?

You can sail on the Gulf Coast year around. It is up to club in the region to bid on major regattas. I think every club should host a signature event. If we hosted more Olympic class world championships in the USA we might have stronger competitors for the Olympic Games.