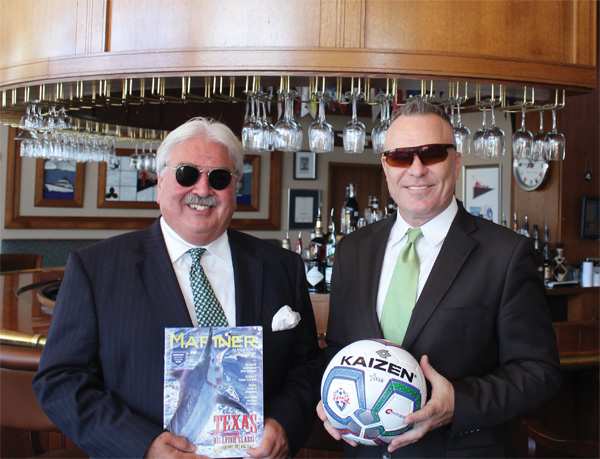 The sponsorship deal was signed by both parties on Aug. 3, 2018. It’s a one-year agreement with an optional year on both sides. Keyes said: “Gulf Coast Mariner is one of leading lifestyle magazines in Texas and will give us tremendous credibility in the Bay Area, also all over Texas. For the Hurricanes FC, this is a perfect match.”

Mariner President and CEO Rick Clapp commented: “I want to support the local professional men’s soccer club and I believe Keyes has the passion and vision to make the Hurricanes FC expand the great game of soccer.” Gulf Coast Mariner’s new logo will appear on the home jerseys of the Hurricanes FC.

Hurricanes FC announced that the new sponsorship with Gulf Coast Mariner “is the biggest sponsorship deal in the club’s history.”

Brandon Rowan, creative director/Partner of Gulf Coast Mariner, said: “We are looking forward to be working with Keyes and the Hurricanes FC.”

“The new Hurricane uniforms will be unveiled in August by Kaizen Sports, our team uniform supplier for the last 5 years,” said Keyes. “We would also like to thank Kaizen Sports for continued sponsorship providing the best uniforms for our players.”

Rick Clapp is the former owner of the Houston Force, a professional APSL  soccer team. Keyes was a player on Clapp’s soccer team and now both are united again.

“I am excited about promoting the game supporting a championship team as well as encouraging youth to play America’s Most Exciting Sport Soccer. They all stand at the anthem. Please come support us we will do it right I promise.”

For more information, contact Sumer Loggins at 281-474-5875 or email Sumerdene@gmail.com