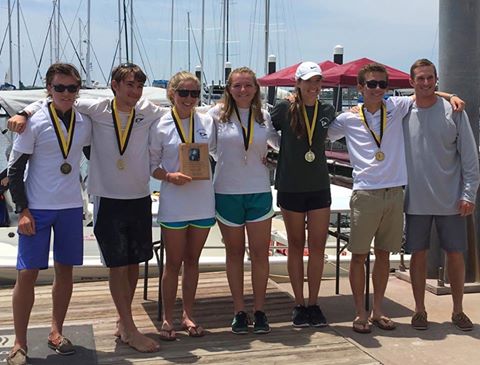 The first ever Texas team has captured the Mallory Trophy in a 1st place win for their area district, SEISA, at the National Championship at the College of Charleston in South Carolina this month. Trained by Bay Access in cooperation with Lakewood Yacht Club, the winning team from Clear Falls High School qualified in April in a two day qualifier in Mississippi to represent the state of Texas at the High School Doublehanded Championship for the Mallory Cup as well as the High School Team Racing Championship for the Baker Cup in Ana Cortes, WA.

The co-ed racing fleet for Division-A was made up of 17-year-old Wiley Rogers and his 18-year-old crewmate Hunter Skinner who dominated both days to pull in a victory overall. Dane Byerly and Laura Masterson partnered with Julia Sheaffer and Bailey Spatz to pull ahead to the finish in Division-B.

While the first day of racing brought on a light, westerly breeze, sailing conditions became shifty. As the day progressed, the wind picked up to 15 knots, slowing down most of the teams. But by the end of the day, the Clear Falls team had pushed themselves to a significant lead.

Day two saw some of the most difficult conditions with light winds out of the North. The team fought hard to come out on top for the duration of 20 races. After two days of intense sailing, the Clear Falls team finished with a 38-point lead.

Training with fellow high school and college sailors in the Houston area, the Clear Lake Knights have worked hard to prepare for the championships.

Leaving behind a rich legacy of sailing, Byerly, Masterson, and Skinner will graduate this year and pursue college sailing at Saint Mary’s College of Maryland, the College of Charleston, and Jacksonville University. The graduates look forward to their second national championship for the Baker Cup in Anacortes, WA at the end of May.

Bay Access is a nonprofit charitable organization that promotes amateur sailing for kids and adults alike. Camp fees include professional instruction, sailboat, and life jacket for those who can’t bring their own. Classes will begin on June 20 and continue on week days through early August. To learn more about the classes and how to register, please go to www.bay-access.org.

About Lakewood Yacht Club: Lakewood Yacht Club is a private, member-owned club reinventing the standard for a vibrant social life, exclusive yachting lifestyle, and premier youth sailing. One of the top ten yacht clubs in the nation, Lakewood beckons to those who love the water and live life to the fullest.