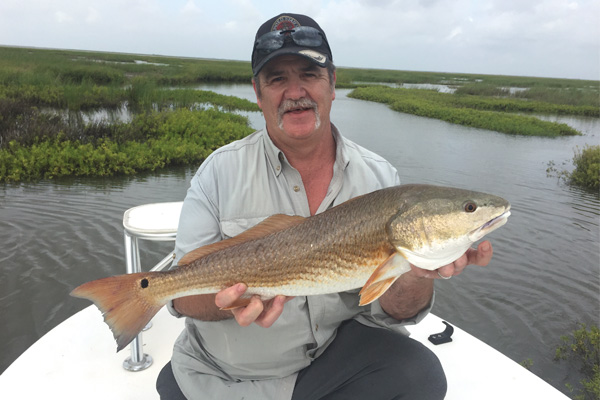 Jeff Mckee with a 28 inch red caught on a Kickin’ Chicken Down South Lure during an ultra high tide.

Down South Lure in Kickin’ Chicken.

Redfish Love to explore! Well, I’ve made that statement many times, truth be told, it’s probably much more accurate to say that they like to hunt in the cover of heavy structures and that they will follow food nearly anywhere it goes.

Every year we have periods of extended onshore wind flows, causing elevated tides. During these periods redfish can often be very difficult to locate in shallow waters around the bay. They just seem to disappear into the fringes of the marsh. Higher water levels can make chasing skinny water reds a very challenging affair. I’ve said I would much prefer a low tide to a very high one. Low tides tend to concentrate fish into much more limited areas and make targeting them considerably easier. High tides tend to scatter fish, they spread out following small food sources deep into areas that are nearly unaccessible.

Think about the typical marsh shorelines on the Upper Texas Coast and this will start to make perfect sense. We have marshes and shorelines that are typically fringed by Spartina Grass, a relatively tall grass that does not grow under water. This grass is a shore plant that grows near and at the edge of the water all along the Gulf Coast. Spartina is the plant that first comes to mind when I think of marsh along the gulf coast.

Redfish are not slackers; they don’t have any objection to moving quite a bit to feed and traveling into heavy cover structure never seems to bother them.

At normal to low water levels, it doesn’t offer much more to the angler than a border to the water. Often providing the edge along which hungry predators feed. As tides creep ever higher during windy periods or around astronomical high tides, The roots and bases of the grass slowly flood with water. Here’s where we have to stop and think about the typical marshes along the coast. Though many marsh areas have oyster shell, as you travel farther into the back reaches, water that is typically too shallow, or doesn’t maintain the proper salinity balance, there is virtually no shell. What you will find is a predominantly mud bottom that really is devoid of structure other than bottom contours carved from tides and water flows. Knowing this, it becomes easy to imagine the difficult life that small fish, crabs and shrimp live, trying to find protective cover and sanctuary from predatory animals. 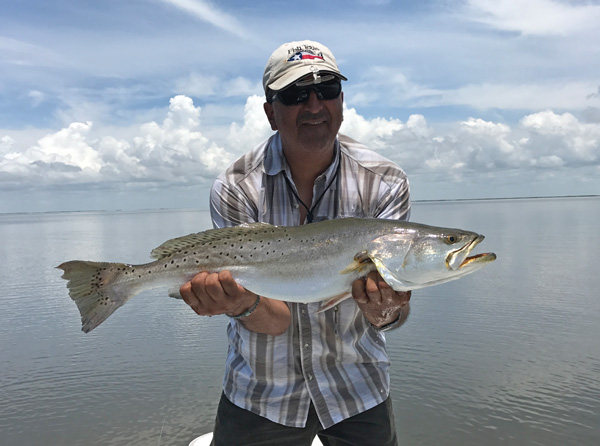 Marcos Enriquez with a stud trout that measured just over 29.” The fish ate a small kwan toad fly.

So we know that there is little structure for the smaller prey animals to hide in, which makes them very vulnerable to attack and predation. The game completely changes as the tides rise. The home of these prey species becomes a dense and food-rich jungle of lush grasses and the decaying plant food that they need to survive and grow. At the earliest moment when these small species can get to the cover of the flooded grass, they will go. It provides nearly everything that they need to thrive.

Redfish are not slackers; they don’t have any objection to moving quite a bit to feed and traveling into heavy cover structure never seems to bother them. Let’s be clear about one thing that I think is a misconception in fishing. Fish aren’t necessarily what we would call smart; they have instinctive programming. They know things happen at certain times, they know that small animals will seek out cover as it becomes available. As a matter of fact, most of the reds that follow food into to this dense cover, only a few short years earlier did the same to hide from predators as well.

Here’s where the game gets tricky. Redfish have to have water to swim. The small animals that they prey upon can get to many places that the fish simply cannot. So early in this rising high tide scenario, the fish just don’t have great opportunities, and for that reason you won’t see much feed activity. Slightly later in the tide, as the water around the grass roots and over formerly dry ground reaches 3-4 inches in depth, the feeding activity begins. This isn’t a schooling behavior with lots of fish together feeding. This is a single fish slowly stalking its meals one at a time. The fish will meander through the maze of grass patches in areas that are typically dry ground, hunting and eating one small meal at a time. You will see random small explosions followed by periods of inactivity as they move stealthily through the cover.

Quite the interesting parallel, we must stalk them in nearly the same manner in which they stalk their prey. Move too fast or make too much noise and you will alert them to your presence. These fish aren’t charging down food so they become very aware of what is going on around them. Stealth and patience are the key to chasing high tide reds, coupled with a well placed cast using flies or small soft plastics. Though there are many challenges, and surely many failed attempts to catch these fish, the successes more than make up for it. Explosive eats in super shallow water. Close range and tight quarters casts are nothing short of spectacular when the fish eat. And the fight when they have some much cover and are in very shallow water is definitely something to experience.

Don’t let the high water deter you. With thoughtful scouting and utilizing a stealthy and tactical approach, these fish can be an absolute blast to target.