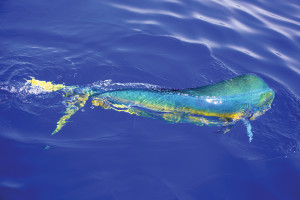 Each year large numbers of anglers look forward to the Labor Day Holiday.  While you might think it is because it is a holiday and a day to go fishing that is not the case.  It signals the end of the busy tourist season and takes hordes of visitors off of the water and sends them back to work, school and other activities.

Following the first Monday in September, there begins a lot of competition for sportsmen’s time.  Dove season starts right away, football games and school activities begin taking the attention of anglers and, as the year progresses, more hunting seasons crop up.

All of this is music to the ears of serious anglers who love to see the early September exodus.

For many seasonal visitors to the Texas Coast, there is a mentality that fishing starts to slow after Labor Day with offshore fishing nearing the end of its prime time and trout beginning to depart the jetties and surf.

Let’s take a look at some of the reasons so many are enthused about the last big holiday of the summer.

While September is known as a transition month for fishing, meaning trout, reds and flounder begin to start changing their patterns, there is a lot of excellent fishing that month and the action just continues to get better as we get into fall.

The days are not so hot and most of the migratory pelagic fish continue to roam the near Gulf waters.  September is one of the best months for tarpon fishing and the jetties and surf begin to come alive with redfish of all sizes.

Some of the best offshore fishing takes place during September.  Until the first cool spell sets in, just about all of the popular pelagic fish are within easy reach for the sports fishing fleet including one of its components, the Mosquito Fleet of smaller seaworthy boats.

Several of my best catches of ling and dorado have occurred during September and October.

While trout begin their transition back into the bays from deeper waters, reds start stacking up at the jetties, with the larger reds preparing to make their annual spawn.

All of this has the added attraction of taking place during mild to warm weather and not the stifling heat of July and August.
Baring an event in the Gulf of Mexico or a cold front, September through early October the weather tends to be quite stable.  Light winds and calm conditions tend to be the norm.

One change that I have noticed over the past 10 years is that our summer has tended to be extended with the beach water temperature remaining in the 80-degree range throughout much of October.  Several decades ago, summer ended earlier and the fall fishing patterns began in early October, usually by Columbus Day.

Recently, it has been late October before any significant cooling has taken place.

For now, let’s plan on taking advantage of the extended summer without the huge crowds.

By the time the next edition of Gulf Coast Mariner Magazine is off the press, our fall fishing patterns should be in full swing and we will take a look where the action is taking place.