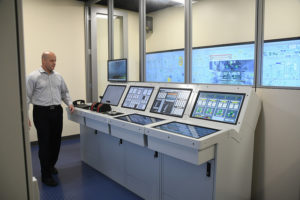 Congressman Gene Green (D-TX-29) introduced the Domestic Maritime Centers of Excellence Act. In September, the legislation was offered on the Senate floor as part of broader package of maritime provisions contained in an NDAA amendment by Sen. John Cornyn (R-TX).

“San Jacinto College is positioned as a top maritime training program in the heart of one of the largest ports in the world,” said Sen. Cornyn. This legislation will benefit both national security and international trade and allow for the growth and strengthening of our maritime workforce thanks to training programs at our community colleges.”

“In our district, we have a surplus of maritime jobs and not enough people with the skills and training to fill them,” said Congressman Gene Green (D-TX-29) in a press release. “The industry is continuing to invest and grow along the Port of Houston, and we want to make sure that our constituents have the opportunity to take these high skilled, middle-class jobs. This bipartisan legislation will help bridge the gap. It’s good for our local community, it’s good for our businesses, and it’s good for the American economy.”

A lack of federal government focus on domestic maritime industry technical training, maritime workers approaching retirement, technological advancements, and the expansion of the Panama Canal are all factors that affect the maritime workforce shortage. Under the provisions of the Domestic Maritime Centers of Excellence Act, the U.S. Maritime Administration (MARAD) can support community and technical college centers of excellence by providing funding and support, technical assistance, and donating surplus federal assets for maritime education – such as marine vessels for use in training programs. Recently, San Jacinto College received support from MARAD to allow maritime students access to Ready Reserve Fleet ships to keep current with the most recent developments of the Standards of Training, Certification and Watchkeeping (STCW).

San Jacinto College has awarded more than 5,500 U.S. Coast Guard (USCG)-approved course completion certificates since 2010 and introduced the state’s first associate degree program in maritime transportation to train those new to the maritime industry. Last year marked the opening of the College’s Maritime Technology and Training Center on the Maritime Campus in La Porte, Texas, to offer more training opportunities for new and incumbent mariners.

“We are truly grateful to Sen. Cornyn and Rep. Green for supporting the important role community colleges hold in the training of mariners for the workforce,” said Dr. Brenda Hellyer, Chancellor of San Jacinto College, in a prepared statement. “San Jacinto College’s maritime program is located along one of the busiest ports in the United States. We are committed to producing highly qualified mariners and aim to alleviate the shortages occurring due to retirements and the expanding global market.”

The San Jacinto College Maritime Technology and Training Center on the Maritime Campus offers a full calendar of USCG-approved maritime courses. For more information and to register, visit sanjac.edu/maritime.

Surrounded by monuments of history, industries and maritime enterprises of today, and the space age of tomorrow, San Jacinto College has been serving the citizens of East Harris County, Texas, since 1961. As a fiscally sound institution, the College currently holds bond ratings of AA and Aa2 by Standard & Poor’s and Moody’s, respectively. San Jacinto College is a 2017 Aspen Prize for Community College Excellence Rising Star Award recipient and an Achieving the Dream Leader College. Approximately 45,000 credit and non-credit students each year benefit from a support system that maps out a pathway for success. The College offers eight areas of study that prepare a diverse body of students to transfer to four-year colleges or universities or enter the workforce with the skills needed to support the growing industries along the Texas Gulf Coast. San Jacinto College graduates contribute nearly $690 million each year to the Texas workforce.

For more information about San Jacinto College call 281-998-6150, visit sanjac.edu or join the conversation on Facebook and Twitter.