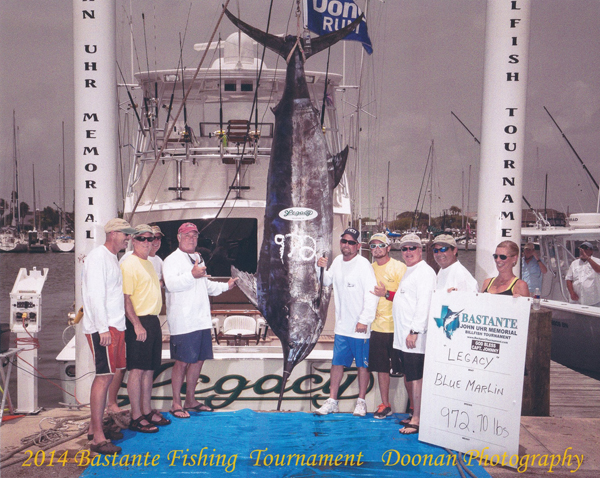 Capt. Kevin Deerman and the crew of the Legacy celebrate their record breaking blue marlin caught during the 2014 Bastante John Uhr Memorial Billfish Tournament. The Rockport Aquarium plans to display a full body mount of this record breaking fish. The mount will be a permanent part of the Aquarium and the dedication ceremony will be held during this year’s Bastante Tournament. 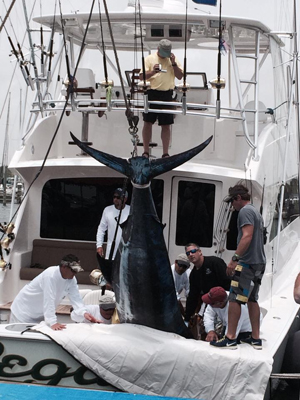 The crew of the Legacy prepares the marlin for the scales.

On July 11, 2014, Kevin Deerman and his eight-man crew caught a blue marlin off the coast of Port Aransas that broke the Texas record,. Deerman, 50, of Galveston, was leading the crew in a 56’ Viking named “Legacy.” The crew included: George Gartner, the owner of the private boat, Michael Fitzpatrick, Ruben Ramos, Colin Ocker, Jeff Owen, Richard Richardson and Cameron Plaag.

The Legacy departed out of Port Aransas around 6 p.m., after waiting for some thunderstorms to pass.

“We were fishing the Bastante John UHR Memorial Billfish Tournament that we had registered for in Rockport the previous day,” says Deerman, “We ran about 130 miles out to the Hoover Diana Spar and started catching bait around 6 a.m.” After gathering a surplus of live tuna to attract the fish, the team started their journey around 6:45 a.m.

After the thunderstorms from the previous night passed through, the weather conditions were perfect for the day of the record catch. That morning was overcast, the water was calm, and there was no wind. The crew was only fishing for about 15 minutes after catching bait when they got the blue marlin to bite. “As soon as we had the fish situated in the cockpit we headed to the dock so we didn’t catch anything else other than bait,” says Deerman.

“We had the bite at 6:58 and it took another 40 minutes to get the fish in the boat before we could make the run back to the weigh station in Rockport,” explains Deerman. The team used their Shimano 130 Tiagra reels and Shimano 130 class rods to reel in the marlin. The line was 130 pounds IGFA Amilon.

It was truly a team effort and took the crew about 17 minutes to fight the marlin before they got her to the boat. Gartner, Fitzpatrick, Ramos and Ocker got the first gaff in the fish, and Owen was able to get a second gaff in. Richardson acted as the angler and “put a lot of heat on the fish,” the captain says. “At one point when the fish went down, he was as close to 60 pounds of drag.” Plaag was Deerman’s mate and wireman on the boat.

Once they got to the weigh station, the crew saw that they broke the record with an enormous 972.7 pounds (137.5” long) blue marlin.  The previous state record weighed 876.5 pounds and was caught on August 20, 1988 off the coast of South Padre Island.

The captain of the Legacy and his crew have many years of experience fishing. Deerman has been fishing in offshore waters most of his life and had his first captains job in 1986 when he received an offer to take a boat to the Bahamas. He has since spent about 15 years fishing in Mexico, Florida, Panama, Costa Rica and Texas. When he fishes for billfish in Texas it’s usually in tournaments.

Cameron Plaag or his father James Plaag always accompanies the captain on his fishing excursions.  “James spends more time on the bay than he does on land,” says Deerman, “I love any kind of fishing. When you catch a nice fish or a good number of species that you are targeting it’s all good, but my favorite fish to catch will always be the blue marlin!”