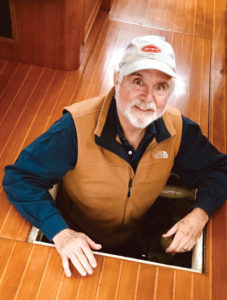 My first encounter to boating was being drug up and down the San Bernard River near Churchill bridge behind a Yellow Jacket 15’ runabout trying to mount the skis – yes, two skis.

I graduated to boat building during 11th grade summer break when my best friend and I decided to create a sailboat with no plans or even pictures. Remarkably, it turned out to look about right for a Laser.  The designer, my buddy, was a little ahead of his time and went on to graduate UT as an aeronautical engineer and a career at NASA

I was addicted, and from then on I cannot remember ever not owning at least one boat. There was always something to be installed, repaired or improved on any boat I owned. My passion crowded the need for 100% adherence to my real job. But it was easier when I bought a Offshore 27 Choey Lee sloop, had it trucked into Houston and planted in my driveway for a major refit, including refreshing the mast and rigging.

I had upgraded to a 40’ Valiant and proposed to my girlfriend that we take off and spend a year cruising the Caribbean. She said ‘let’s go!’ and off we sailed for a year across the Gulf, the Keys, Bahamas, DR, Virgins and Windwards and Leewards to the Grenadines.

When you’re out on a trip like that, you might need to know how to fix whatever went wrong.

« Alex Leva of Blue Wave Boats
Something for every boater »