Monsters of the Past – Texas Shark Fishing 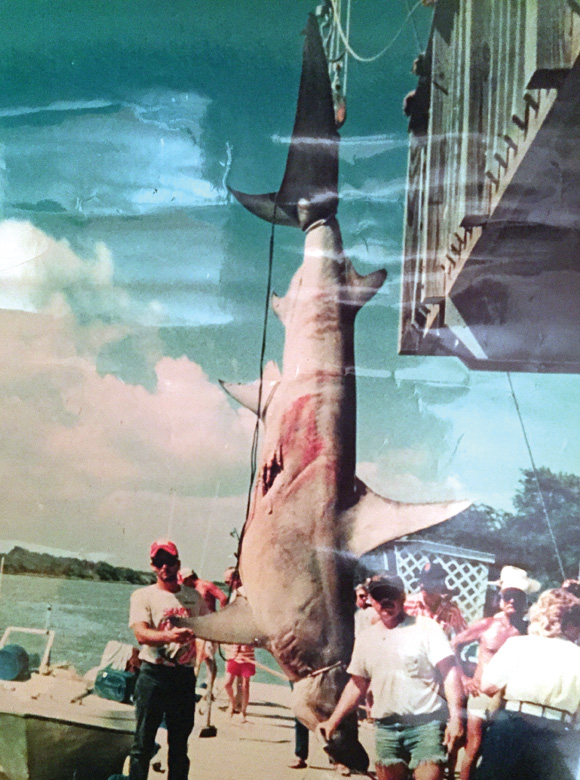 Capt. Brett Holden, left, with a huge hammerhead shark caught 13 miles off the beach of Matagorda during The Big, The Bad & The Ugly Shark Tournament of years past.

Back in the day shark fishing was a big hit. Boats traveled from across the entire Gulf Coast to fish shark tournaments on the Texas coast. Tourneys like The Big, The Bad & The Ugly in Matagorda, The Monster Fishing Tournament in Freeport and the Hall of Fame Tournament held on the old Texas City Dike, drew in crowds from around the state.

Vacations were scheduled around the events so everyone could see the monster sharks come in to the dock. These tournaments were held during the summer months, which was the best time to target big sharks in close.

As time marched on, enthusiasm for shark fishing kind of withered away. Many, including myself, just decided it was not ethical to target and kill these monster “prehistoric giants” for a few bucks and a picture.

I fished my tail off for big sharks as a young man and caught numerous sharks  in the 600-to-1000-pound range. They are incredible creatures and I really enjoyed it back in the day. But knowing now that some of these giants were estimated to be over 100 years old, I would never kill another one of that caliber again. They are a really cool part of the oceans that we love so much.

One thing I have noticed lately is how so many of the shark fisherman today are catching and releasing some big fish from nearshore boats and the beach. It is still not uncommon to see a 500-1000-pound class fish being caught on video and released to fight another day, which is very cool!

For decades, large sharks have been a great sport fish. The big ones can be targeted from as close in as the breakers on the beach, to just a few miles offshore. How many other species of fish can you target from a very small boat that close in and still be in search of a true grander without breaking the bank?

One Comment to “Monsters of the Past – Texas Shark Fishing”