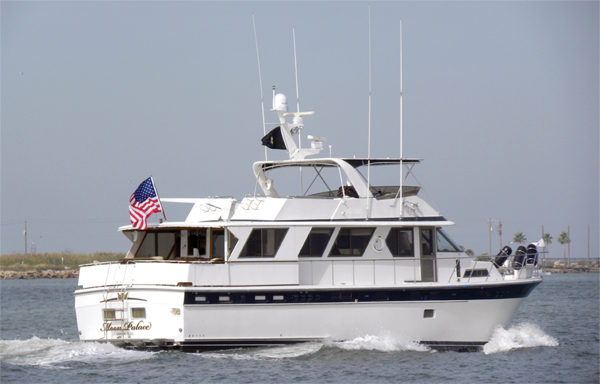 One of a kind 65′ Jefferson Monticello Yacht

This 65’ Jefferson Monticello yacht was designed by Hershine Yachts for the Mossberg firearms family. It is now owned by Moonboat LLC, a partnership of Doris Richeson and James Malone and sign-named Moon Palace.

Gulf Coast Mariner: How did you get started in this restoration project?

Doris Richeson: James Malone and I also own a 50’ Chris Craft yacht (the IRS says that if the vessel is more than 29,’ it’s a yacht) also named Moon Palace, but when we saw the 65’ Jefferson Monticello — the only one ever made — and its potential, we were smitten. Adding to our ferver was the fact that we were advised that the owner was quite anxious to make a deal to sell the vessel.

We learned that the owner was Bill Janklow, former governor of South Dakota, who had a brain cancer which was soon to claim his life. He wanted to sell the vessel and looked for a hasty sale, one in which the sale would be “as is where is.”

However, when we had our pre-purchase inspection, we were advised that the big twin diesel engines were essentially trashed, thus we amended our offer to Janklow to allow for the replacement of the engines. The sale was closed on December 7, 2011.

Little did we know what a money monster the yacht would become. First we ordered the new Caterpillar C-18 1150 hp turbo diesel engines, and then realized the dual transmissions would not tolerate the strength of the new engines, hence the transmissions were upgraded to ZF transmissions large enough for even big C32 Caterpillar engines. When the 4-blade brass propellers did not challenge the new engines adequately, we had ZF design and build new 35” 5-blade props. Moon Palace can now achieve a respectable 24 knots. Wanting the extra safety of a bow thruster, we added this to take us into unaccommodating spaces. 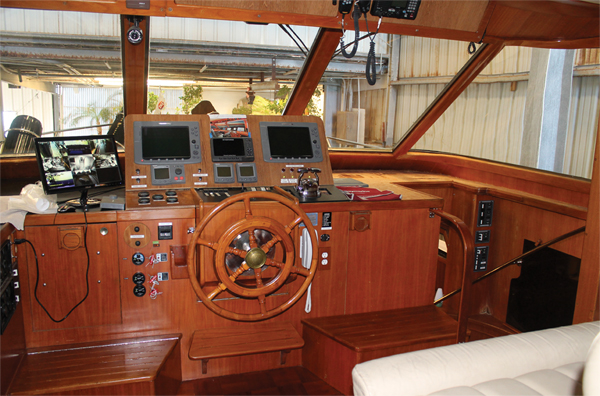 GCM: When and where did you buy the boat?

DR: We first saw the yacht moored at another marina in Seabrook. It was then named Rock ‘n Roll. This vessel had three previous owners, beginning with the Mossberg firearms family, who had apparently selected the original Tre Kronor decor, featuring bright yellows and blues and eponymous with its original name. 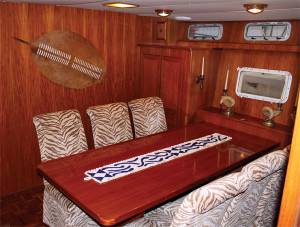 GCM: What are some of the recent changes you are making (have made) to the boat?

Malone thinks the giant engines are works of art; I think they are works of necessity, but James won the argument: We have big hallway windows so all can see the roaring monsters.”

Being rather Texas proud, James and I converted step by step from Tre Kronor’s bright colors to our favorite antique African and primitive decor, all the while, repairing, varnishing, replacing, and generally restoring the craft to our personal preferences, even as the major mechanical works were in progress, all done by local contractors.

Michael Raach, a very talented wood artist, has labored for over a year building unique cabinetry and features such as the aft-deck drop-down TV cabinet and the aft-deck ceiling done in 2” wide book-matched teakwood strips.

GCM: Does the boat have any special feature you can tell us about?

DR: Moon Palace is moored at Galveston Yacht Basin A47, the only covered slip at the Basin which is large enough to house the 65’ Jefferson. A47 is the slip built for the original Galveston Yacht Basin owners, Robert Everett “Bob” and Vivian Smith, and has space for vehicle parking as well as a hospitality area and room enough for a “genuine” Rolls Royce golf cart the partners love to drive on our Galveston sightseeing tours.

I am working with Capt. Rob Robertson, who was captain on the 65’ Jefferson for a substantial period of time, and hope to get some information as to what I have been told is his very interesting story.

GCM: Do you plan to go cruising any time soon?

DR: As we’ve repaired, renovated and redecorated, we have made Gulf of Mexico cruises, hosting family and friends, living on board when James and I are in Galveston.

With the renovation and repairs completed and having passed Sea Trials in the open seas, Moon Palace’s opportunity for longer cruises has finally arrived. 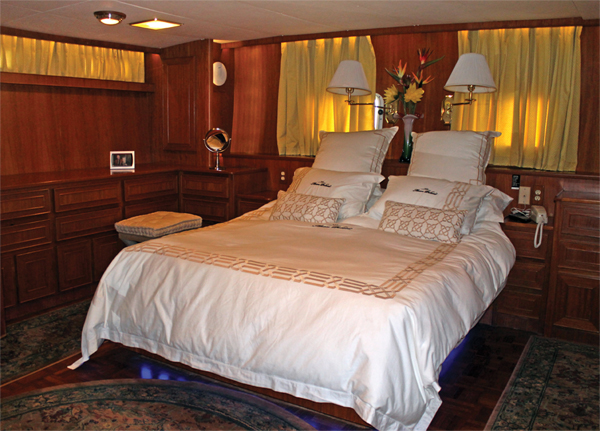 GCM: What is the best thing you enjoy about Moon Palace?

DR: Even if Moon Palace is resting up for her next cruise, the best thing we enjoy is seeing  a very favorite view of the world from our own private slip A47 at newly-revived Galveston Yacht Basin.

Most of James Malone’s family is deceased, but friends from North Texas and Galveston are sometimes aboard. Malone lives in Fort Worth and is owner of After-Dark Lightscaping.

Doris Richeson is a multi-unit restaurant owner and has a very close-knit family of three grandchildren — all of whom are in her business — and their spouses and children. All have enjoyed being aboard Moon Palace, as have Doris’s friends from her hometown of Graham, Texas; Doris’s full-time residence is on Possum Kingdom Lake, 18 miles south of Graham.