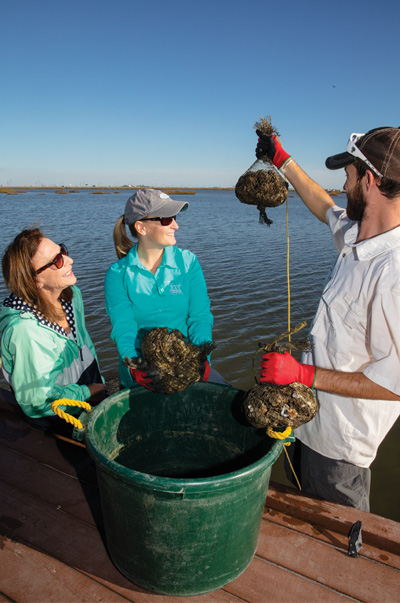 Residents hang bags from their docks to spawn bi-valves

Good things happen over wine, and in this case, it was oyster gardening.  At a Wine Social last Spring, Bayou Vista resident Chris Roper suggested to her neighbors that they collectively cultivate oysters, right from their docks.  It’s a program that Galveston Bay Foundation started in 2010, and has been doing with success in Kemah and San Leon.

Fourteen residents signed up to help, and in June, they gathered at the Roper’s driveway on Blue Heron Drive to create the 5-pound bags.  In all, they assembled 25 bags.  Again, wine was the elixir. “We were bagging with oyster gardening in one hand and wine in the other,” says Chris.

With Galveston Bay’s oyster population at an all time low, beset every two years by silt, storms, low salinities or high salinities, Galveston Bay Foundation is enlisting communities to spawn their growth and shore up subsiding land.

Bayou Vista’s tightknit bay community is a perfect setting to try out the nursery program.  At the intersection of I-45 and Hwy 6 near Galveston, it’s built around a series of residential canals fed by Highland Bayou.  On the community’s southeast boundary lies a wetland fed by West Bay.  Residents hung bags from their docks both on the bayou-canal side and the wetland side to see where the oyster larvae, spat, would take hold starting in June.

Six months later, on this last day of November, it’s time to collect the bags, check for spat, and move the bags to an oyster bar breakwater so they can mature.  We’re at the Roper’s residence, it’s a brilliantly clear afternoon, and the folks from Galveston Bay Foundation are curious to see what’s inside two ice chests at the Roper’s front door.  Hallie Carter, Galveston Bay Foundation’s Habitat Restoration Coordinator, and Michael Neibuhr, Program Technician, open the chests and remove the wet towels covering bags that neighbors have dropped off.  One bag, hung in the canal, shows no spats; the other, hung in the wetland, is full of spats.  Commenting on that neighbor’s results, Chris says, “We’ve had very little influx.  I’m not surprised that our water in the canal was not absolutely full of silt.  It was dark brown.  You couldn’t see anything.”

Unlike Chesapeake Bay, where oyster gardening has been going on for years, it’s not legal to seed oysters here.  In Texas, it has to happen naturally.  So, if communities want to build oyster populations, they have to set their bags in optimum conditions.  This first year at Bayou Vista is a telling example for future sites.

Jeannie Kidwell has just returned from Christmas shopping for her grandkids when she comes to her dock to help pull up her half-year effort.  “I was a Foster Parent,” she says.

Haille and Michael open her bags and the others on the Roper’s dock, sorting the shells, looking for spats.  “I’m amazed at what I see,” says Haille.  She’s finding spat on every 10 oysters.  Some shells are covered with three or more spat. 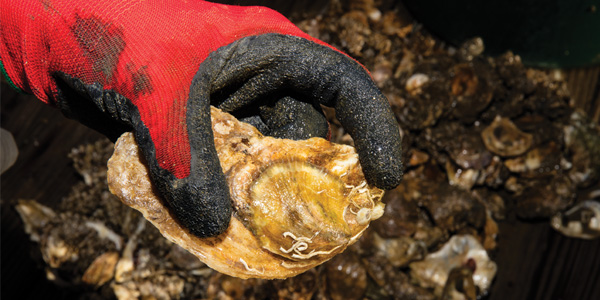 That’s a spat! The oyster gardening program is designed to spawn new oysters each year.

It will take two years for this spat to grow to the legal 3-inch-size oyster for harvesting.  But these will never be harvested.  Today they’re going into restricted waters off Galveston Bay Foundation’s 449-acre Sweetwater Preserve.  There, the oysters will build a breakwater for land quickly eroding at a rate of two feet each year.  The waters at the edge of this Galveston Island preserve connect to Bayou Vista’s wetland nursery.  “When we transport spat, we have to keep them in the same sub-bay system,” says Haille.  And, in this case, it’s West Bay.

The evening is closing in when we arrive at the Sweetwater Preserve to deposit the bags.  Near the water is a tall pile of oyster shells, a curing site for those collected from nearby restaurants.  So far, six Bay Area restaurants participate in the shell-recycling program.  They’ve been given 32-gallon collection bins that Galveston Bay Foundation retrieves and brings to the curing site on a weekly basis.  Michael led that effort for most of last year. “I’d visit Tookie’s the most, about three times a week,” he says.

Shells at the curing site will go into the 5-pound bags for the gardening program.  They also make up the 35-pound bags that form this and other breakwaters.  Since 2011, the program has collected 570 tons of shells.

As they set the bags in the reef, Haille talks about how the program will expand to Galveston Island in the next year.  “We‘ll partner with Gaidos and Cajun Greek, and continue our partnership with Texas A&M-Galveston with students picking up shells at those recycling sites and taking them to the curing sites.”

Oyster gardening is easy for families to do with their kids, and it’s a good way for kids to connect to their eco-system.  To get involved, contact: