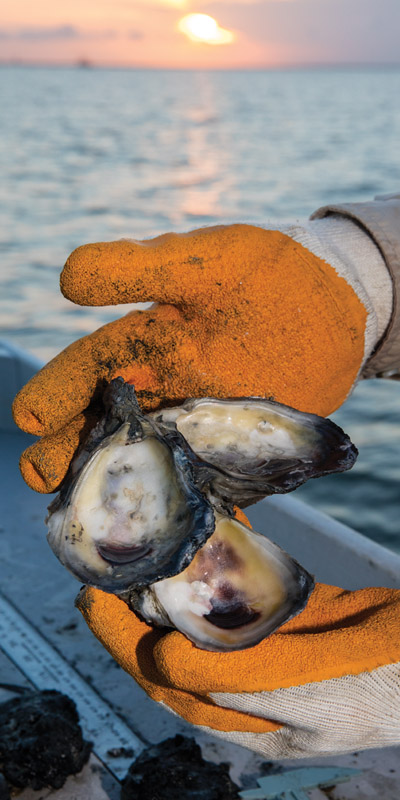 It’s just after peak growing season for Eastern oysters in Galveston Bay, but on this day you wouldn’t know it.  When the field team and scientists with Texas Parks and Wildlife conduct a normal, random dredge sampling at dawn, the results are anything but normal.

In her orange-gloved hands Coastal Fisheries Technician Claire Iseton holds three empty oyster shells.  The few oysters that do come up in the basket are black and lifeless.  Coming up empty within site of Kemah’s famous seafood boardwalk where oysters are on the menu from November through April 30 is not a good sign, but it’s a trend that’s been deepening since 2000, when oysters large enough for the market suddenly plummeted and have been on a steady decline since.

There’s no telling the age of the live and dead oysters dredged up this morning, but what the team does know is that it takes about two years for a spat to become a mature oyster.  And, the bay’s once prolific oysters reefs just haven’t had enough time to recover before they are dealt another blow.

Over 50 years ago, oyster reefs in Galveston and surrounding bays were so common that the coastal roads were paved with oyster shells.  Over a century ago, before roads and railroads, a natural oyster reef linked both sides of Galveston Bay.  So prominent was this reef that, given a stiff north wind and a low tide, cattle crossed the bay on this ridge.

Galveston Bay used to account for 80% of Texas’ harvested oysters.  Today, that number is more like 40%.  Although the counts have been in decline for over 20 years, it has stepped up in the last eight years with a major setback every two years.  In September 2008, Hurricane Ike hit, covering nearly half the oyster beds of Galveston Bay with smothering silt.  The situation in East Bay, behind Bolivar’s Peninsula, was worst: over 80% were silt-covered from the storm.  Then in 2010, the lack of fresh water due to the drought sent salinity rates soaring, exceeding what oysters could live on.  The next year, 2011, oysters were hit by the Red Tide, and then, back-to-back, last year and this year, excessive rains flooded the bay with freshwater, beyond the oysters’ capacity to survive. According to TPWD’s Fisheries Biologist Christine Jensen, the bay’s average salinity for this July was ”getting closer to normal, but still low at an average of 11.5 parts per thousand.”

Add to these natural pressures, there’s the human pressure: more people live in Texas than 50 years ago, and there’s more demand to enjoy oysters at the table.   Fishermen are pressured to harvest the very material that might provide the future harvest.  And, they can get a good price for it.  In 2014, a sack of oysters commanded $35, up $20 from 1993.  Given current low harvest counts, this year’s price may well be that, or higher. 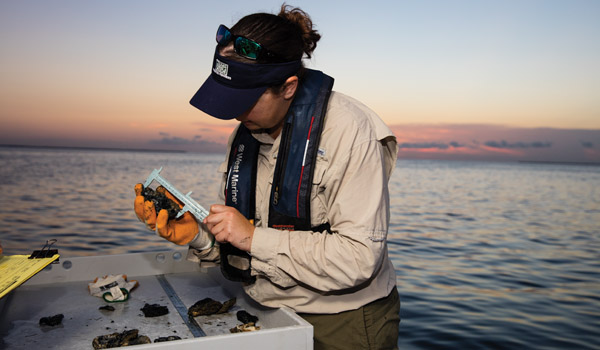 Claire Iseton inspects an oyster sampling on TPWD’s vessel, the Trinity Bay, at a reef within sight of the Kemah Boardwalk.

It’s unknown just how much of Galveston and the surrounding bays are covered with oyster reefs.  The last complete mapping survey was done 21 years ago by Eric N. Powell who tapped the bottom of the bay with a pole to pinpoint reefs.  His research on the Eastern oyster continues.  Sophisticated technology like hydro-acoustics and side scan imagery has been useful for mapping specific losses, like in the aftermath of Ike, but the application for the whole bay is considered time consuming.

In the meantime, man’s efforts to recover the losses seem like a drop in the bucket.  Since 2009, reef restoration efforts have only restored about 1/10 of what’s been lost, 1,300 acres of the bay.  And, many of those restoration sites are off limits to fishing until they can flourish.

On June 11, Galveston County Judge Mark A. Henry took the first step to help area oyster business owners get financial assistance by declaring a local disaster.  In order to get funding, oysters farmers will need a disaster declaration from the State of Texas.  The Judge is in the process of submitting a formal request to Governor Abbott for targeted legislation to address the issue.