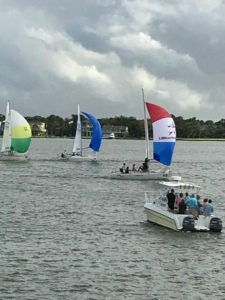 Although the competitors were held onshore Sunday due to storms, the race committee ran a full day of racing on Saturday for 72 boats in a building breeze. The Judges had work to do on the water and onshore; after all was done, this year’s top finishers in each class were:

Full results are available at www.lakewoodyachtclub.com.

This year’s festivities also included a celebrity racing event on Clear Lake that spectators enjoyed watching and listening to humorous live commentary on from the newly opened BARge 295 in the location of the old Turtle Club. On Friday, Oct. 20, at 1600, J/Boat legend racers Jeff Johnstone, Scott Young, Farley Fontenot and Jay Lutz set off to measure their racing prowess on loaned-out J/24s in honor of J/Boats celebrating 40 years in the making.

Sailors, volunteers and guests enjoyed the annual Saturday night party, which included live music poolside by Jerry Angeley and by the LC Roots Band in the LYC lounge as well as a Frogmore Stew traditional shrimp dinner in the grand ballroom.

The LYC bar and lounge were at full capacity for the awards ceremony Sunday afternoon.

For regatta information or questions about next year’s event, visit www.jfestsouthwest.com.