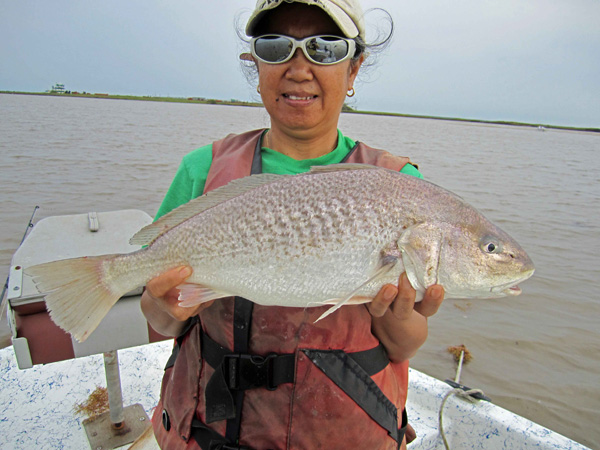 Big croaker like this one are hard to come by these days.

While not a piece of legislation, this characterization is a question on the minds of many senior anglers who once enjoyed the annual golden croaker runs during the autumn.

October and November are the prime months for this event and for many years Rollover Pass and other passageways into the Gulf of Mexico would be lined with anglers virtually shoulder to shoulder with their baits in the water during the big runs.

During my growing up years, my dad would take me to Rollover Pass when word got out that the croaker were running, and in most instances I caught several croaker in the one to two pound category.  Dead shrimp fished on the bottom was the bait, and just about everyone around me was catching fish.

The annual migration, or run as it is commonly called, usually coincided with the annual flounder migration or flounder run.  Rollover Pass also was a popular spot to catch flounder during their migration.

Over the past three to four decades, a noticeable decline in the numbers of the big or bull croaker has taken place.  While this fish continues to make its journey to the Gulf each fall, large concentrations have not been observed.

Sporadic reports continue to come in of isolated catches of the migrating fish with a few of them being well over two pounds in weight.  Three-pound croaker were not at all uncommon during the migrations of years ago.

Croaker are a resilient fish and can reproduce often and in varied conditions. This is one reason the Texas Parks and Wildlife Department has not been greatly concerned over their populations.  They are not as sensitive to salinity levels or cold temperature as many other fish.

So, we ask the question:  “What has happened to our stocks of croaker?”

For at least two decades, anglers have been inquiring about the decline in the bull croaker, especially the ones that used to dominate the migrations.  Today, questions are coming from year-round croaker anglers wondering why they are not catching as many and that the sizes seem to be getting smaller.

As a child and a teenager, I was among those anglers fishing just out of Seabrook for nice-sized croaker.  Scotts Reef, probably a mile or two from shore, was noted for its big croaker.  Not the average size of the fall migration but in the ¾ to pound and a half range.  That was a great eating size and very popular for the table.

Today, croaker remain widespread and are easily caught; however, the average size seems to be progressively declining as well as the numbers being caught.

Early on, it was thought that the bycatch from shrimp nets was the culprit; however, croaker have been enduring that for decades and the number of shrimpers on Galveston Bay is declining.

Many anglers feel that the demand for small croaker for bait, one of the top choices for speckled trout, is a major factor.  More and more bait camps are offering live croaker for bait and, when there is a shortage of live shrimp, the other top bait, croaker are usually available.

Several professional fishing guides have told me privately that the bait market for live croaker is taking its toll on the stocks and, while I am not advocating a prohibition of the sale of bait croaker, I do think a serious study of the situation is warranted and if any appropriate regulations should be enacted, they should be encouraged to help this fish rebound.

TPWD has been successful in restoring our trout and redfish populations and croaker stocks should be next on their list to build back.