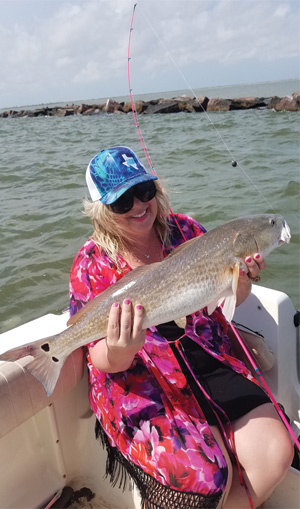 Jessica Riemer with a nice post-Harvey redfish. Redfish, unconcerned with low salinity levels, went on a feeding frenzy after the hurricane.

Well, the Galveston area did dodge the destruction of Hurricane Harvey’s winds, but not the rainfall. The Houston/Galveston area received upwards to 60 inches of rain and Galveston Bay became “fresh” from all the runoff. Fishing in September was non-existent, with few folks even trying their luck. As October rolled around, fishermen began plying the waters, with catches coming from the Jetties, East Bay and south of the Eagle Point area. Every tide change in October pushed the saltwater farther north into the Galveston Bay Complex. The outlook for November/December at the time of publication is positive!

November will be the month of transition for those seeking speckled trout. The trout will continue to move farther north with each tide change, but will they be in the normal areas, like Jack’s Pocket in Trinity, Tabbs, Scott and Burnett Bays? I would guess towards the end of the month, anglers should be able to catch some fish from these areas. Until then look for trout to remain in the areas they have been in October. Don’t overlook the west shoreline of Galveston Bay from Eagle Point to Seabrook. Also the western side of Trinity Bay from Dow’s Reef to the HLP Spillway. The wells in the middle of Galveston Bay and Trinity Bay, along with West Galveston Bay have the potential to produce great catches this November.

November is also the traditional month for flounder. The so called “Flounder Run” is in full force this month. Any shoreline, along any bay where drains are located is where one should concentrate their effort. The well known Galveston Channel, from Seawolf Park to the Pelican Island Bridge should be loaded up this year with flatfish! Already, some really nice flounder have been caught this October. It should only get better.

By December, we should see the Galveston Complex returning to a normal fishing pattern. The fish should be in their regular areas. The far back end of Trinity, the NW end of Galveston Bay, and West Galveston Bay will be the areas to target.

Hopefully we can dodge a big freeze and have minimal rainfall with each passing cold front. Eagle Point Fishing Camp has had a great supply of live shrimp and croaker. Their goal is to continue to have live bait throughout this year. You can always call them at 281-339-1131 to check on their bait supply. This time of year bait can become scarce, it is nice to know that you can count them to have live bait.