With 105 boats already pre-registered for the 2019 Mississippi Gulf Coast Billfish Classic and many more expected before the June 3 kick-off, the stakes will again be high for this popular sport-fishing event. More than $2 million in prize money was awarded in 2017 and 2018. Yet tournament organizers are sweetening the pot just a little more this year.

“We’re adding a special $25,000 incentive that will be paid if the winning fish is caught on a lure,” says Tournament Director Bobby Carter. “It has to be strictly a lure with no meat or bait attached. Dozens of genuine trophy blue marlin have been caught on plastics in the Gulf over the years, so including this special payout adds an interesting wrinkle to this year’s event.”

The Classic was the first tournament in the Gulf to increase the minimum length requirement to boat a blue marlin to 110 inches. Fish are measured from the tip of the lower jaw to the fork of the tail. Smaller billfish can still be caught and released as part of the competition. Teams can also enter optional release division categories for a chance at six-figure prize payouts. Qualifying catches are verified by video confirmation.

“We are continuing to work with the other Gulf tournaments to standardize the catch and release rules,” explains Tournament Coordinator Bert Merritt. “That aspect is a major component as we all move forward, especially with the levels of prize money involved. Our catch data bears this out. In today’s climate, raising the length to 110 inches to boat a qualifying blue makes sense.”

In addition to the blue marlin weight category and the release division (smaller blues, white marlin and sailfish/spearfish), teams can also weigh yellowfin tuna, wahoo and dolphin. The swordfish category has been retired after the new Mississippi state record was set in 2017.

The Mississippi Gulf Coast Billfish Classic is hosted by the Golden Nugget Casino & Hotel in Biloxi. Besides world-class gaming, the area offers beaches, golf, shopping and fine dining for family members who choose to stay ashore.

The 2019 MGCBC will be held June 3-9 at the Golden Nugget Casino & Hotel/Point Cadet Marina in Biloxi, Mississippi. To enter or learn more about the rules and tournament history, please visit www.mgcbc.com or through social media (Facebook, Instagram, Twitter).

The warm tropical hospitality of the Dominican Republic really seems to suit one North Carolina sportfisher. Builder’s Choice, a 64 Jarrett Bay based in New Bern, took top honors at the third annual Marina Casa de Campo Open last week at the luxurious resort in La Romana, DR. This marks the second year in a row that the boat has finished atop the Open leaderboard, which is co-sponsored by the marina and Fly Zone Fishing.

Led by Capt. Brent Gaskill, Builder’s Choice released five blue marlin the first day of fishing and added two more the next. Cabana, a 64 Spencer run by Capt. Eddie Wheeler, claimed second place with a two/one split of blues. Auspicious, an 80 Viking with Capt. Cookie Murray at the helm, made a last-day charge by releasing three blue marlin within a 45-minute span. Ties are broken by the time of release.

Blue marlin count for 400 points in the Open’s all-release format. White and hatchet marlin, plus spearfish, score 100 points while sailfish are worth 50. There are no line class rules in this event, but boats are limited to six rods. Lures and baits are both allowed, with ballyhoo the most common offering in the spreads.

“This is a full-fledged boat tourney,” explains Tournament Director Robert “Fly” Navarro. “The teams just go out, have fun and catch fish. We’ve gotten positive feedback on the simplicity of our rules.

“We co-host with Marina Casa de Campo to showcase the facility and celebrate these visiting boats spending time in the region,” he adds. “It’s a world-class resort and the fishing isn’t too bad, either. The marina and Casa de Campo take care of the hospitality aspects and event details while we run the tournament. We had live updates on social media throughout the tournament.”

The dates for next year’s Marina Casa de Campo Open are set for March 14-16, 2020. For more information on registration and dockage, please visit flyzonefishing.com 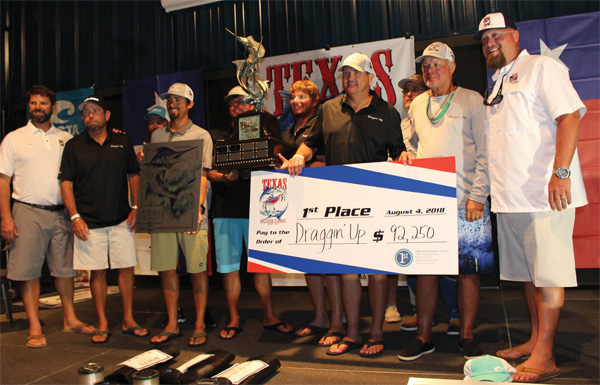 The Texas Billfish Classic celebrates its third year of bringing highly competitive billfishing back to Freeport. Over the past three years, the tourney has grown steadily and produces one of the most popular and enjoyable tournament formats on the Texas Gulf Coast.

The original tournament was formed in the 1980s by many of the bluewater pioneers who put Freeport on the map as a Blue Marlin hotspot in the 80s and 90s. During this time the Billfish Classic was a premier event with a rich history of record catches and great times.

“One of the biggest success stories of the TBC is not the fishing, but what we are able to do on land,” Gast said. “Since 2015, the TBC has donated more than $25,000 to local and regional non-profit organizations.”

The tournament works closely with three charities – the Freedom Alliance, The Billfish Foundation and the Freeport to Port O’Connor Toy Run. 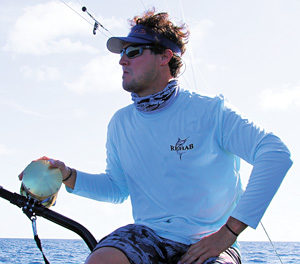 Jasen Gast has owned REHAB, a tournament winning 45’ Davis sportfisher, for five years now and has a history and passion for taking disabled children, veterans and others out on fishing trips. The opportunity to further help the needy came to Gast after meeting the Freedom Alliance’s Pepper Ailor while fishing in Costa Rica.

“I met Jasen during the Triple Crown in Los Sueños, Costa Rica. He wanted to bring a more patriotic aspect to his tournament,” Ailor said.

Since that meeting, the Texas Billfish Classic has already donated thousands to the charity and much more in the way of real life experiences and trips for our nation’s heroes.

“We are not a one and done charity,” said Pepper Ailor, who has worked with the Freedom Alliance over the past 13 years. “We stay in the lives of these heroes and bless the troops with genuine relationships.”

Each year the TBC invites a group of veterans down to Freeport to be involved in the week’s events and also embark on an offshore trip. With no cell phones or distractions, deeper connections are made during the inevitable lulls of a fishing trip and the shared exhilaration during the high excitement moments. 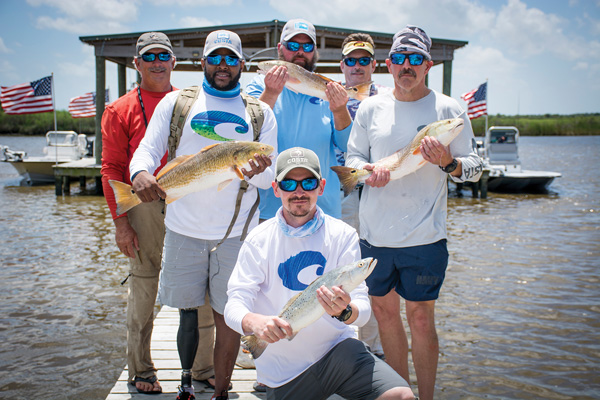 Veteran group after a solid day catching fish during a donated trip on Galveston Bay in 2017. Photo by Pepper Ailor.

“He has so much fun on those trips! Jeramie’s wife Lindsey said. “He comes back with new friends and so many stories! Thank you for inviting him! He is keeping in contact with several people through text. He just had the best time!”

Great things continue to be born of the relationship between the Freedom Alliance and TBC. Dudley Wood, a tournament participant and owner of the 54’ Bertram Smoker II, even donated a hunting trip to a group of five veterans he met during the tournament last year.

Gulf Coast Mariner encourages our readers to donate and volunteer for the Freedom Alliance and other worthy veterans charities but Pepper Ailor wants to see something greater happen.

“Form a genuine relationship with a veteran.” Ailor said. “There is too big a gap between the lives of our defenders and the public sector. Our veterans need to do a better job opening up and civilians need to listen better. 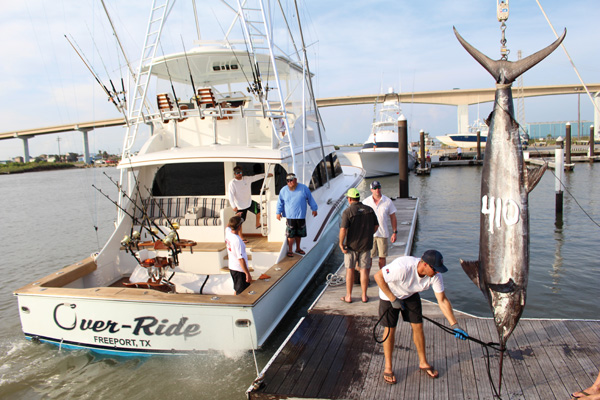 The TBC continues to be one of the fastest growing competitive billfish events in Texas. The high number of billfish catches in August along the Texas shelf also adds to a spirited weigh-in and awards banquet on Saturday night. Fishing the TBC is known to be hot by day and festive at night.

“He puts on the best as far as I’m concerned,” said Dudley Wood of Smoker II. “He lets us leave during daylight and that is huge. That’s why I quit some other tournaments that start you running out at night. The safety of my captain and crew is paramount.”

“It is a great tournament,” said Shawn Kurtz, owner of Hey Girl, the winning boat of the 2017 tourney. “Jasen has put together a pretty good program. It gets better and better each year.”

New for 2018 is the inclusion of the Billfish Classic Cup trophy. The winner of the BCC will be decided by the boat with the highest total release points from both the Texas Billfish Classic and Mississippi Gulf Coast Billfish Classic, and in turn, take home a minimum of $10,000 cash.

This conservation minded tournament also encourages billfish release with the highest minimum in the state for harvesting Blue Marlin at 107 inches.

Don’t miss the hot fishing and festive nights this revived classic brings to Freeport. The general public is welcome and encouraged to attend the weigh-in on Friday and Saturday.