Dove on the Mind 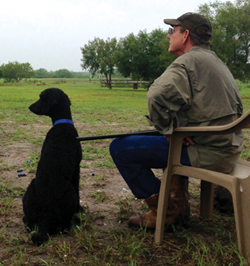 This passion is best satisfied on opening day and celebrated like a right of passage.  It’s hard to explain if you are not one of us crazy people who mark the date on the calendar every year, point your finger at every dove you see and go “BAM” and incessantly day dream of a miracle retrieve your dog simply cannot make.

As opening day slowly approaches, talk turns to shotgun gauge, barrel length, ammo, weather, how best to cook them, good times and dogs.  The sheer anticipation of the hunt keeps the mind occupied for hours and is always an excuse to gather with friends at the local watering hole.  You re-live hunts of the past, the perfect double, limits for all and tasty dove poppers.  But the truth about dove hunting, like history, is more sobering.

North Zone opening day near China, Texas brought an abundance of birds.  The owner of the lease, S. Tanner Garth, shot an easy limit of fifteen in less than an hour.  Six other friends were gone with their limit before I bagged my first three.  Two hours into the shoot Alan Calaway, who was shooting his infamous Remington 12 gauge auto, nicknamed “Mr. Murder,” wandered over and asked if I could use some help.  Even though he had suffered from the heat and had to sit in the shade with a cold rag on his head while he drank a couple of cold beers, he too had his limit.  Not to admit defeat, I quickly reminded him of the Texas Parks and Wildlife hunting regulations stating you had to shoot your own birds, and besides, I didn’t need any help.  Shortly thereafter my son, Will Blalock, shooting a newly acquired Browning 12 gauge over and under, approached and asked how I was shooting.  He, too, had his limit.  I told him I had a couple of those tasty little birds and proceeded to blame my bird count on my gun and ability to find the dove once shot.  Trying to be helpful my son left me with our bird dog and asked if I wanted to swap my Benelli 12 gauge auto for his over and under.  I said no.  There went the excuses.

About this time I noticed the 300 acre plowed under rice fields we were hunting was slowly thinning out of hunters.  I now had four birds and was almost out of shells.  I should have carried more than 3 boxes.  Thank goodness for fellow hunter, Mark Middlebrooks, a friend of 40 years.  I walked over, took a seat and as my luck would have it he had an extra box.  I had been shooting 2¾ 1 ounce #8.  An advertised deal at $4.99 a box, the “Academy special.”  He had 2¾ 1.5 ounce #7½.  At $7.50 a box it was still advertised as a deal, but I don’t see how.  Time to re-think the reloading game, especially the way I shoot.

The next six birds brought my count to six and Mark’s limit.  My bird dog made short order of the retrieves and gave me a newfound belief in my dog handling skills.  My son did a fine job training that dog.  There is little in life more satisfying than watching my dog make a good retrieve.  It does something for the soul, even if the dog is a part time bird dog and full time house pet. 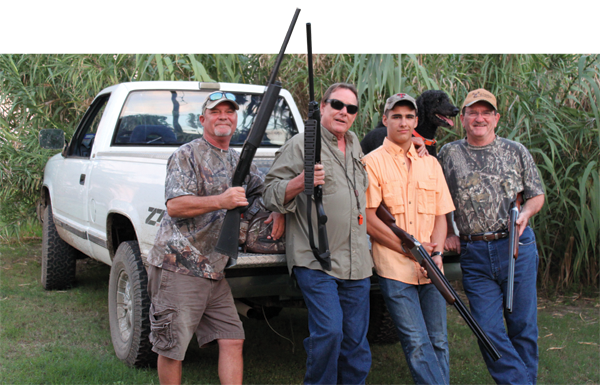 At sunset we packed it in.  Out of 12 hunters we had 10 limits, Danny Middlebrooks’s 12 birds, three short of a limit and my eight birds, 170 birds for the afternoon.  I would have had nine but I called my dog off a dove when my son shot a snake near that downed bird.  It was just a water snake but a snake none-the-less.  We put it in an empty shell box and handed it to Tanner Jr.  Quite the surprise but he manned up and threw the headless snake back at us.

The next day we sat on the porch and cooked our prize.  The proverbial dove poppers.  Everyone has a slightly different way of cooking them.  I like to cut the breast off the bone and then marinate it in teriyaki, pepper, garlic, oil and vinegar. Then wrap the breast, a slice of jalapeno and monterey jack cheese in a small piece of bacon.  Insert toothpick, grill and enjoy.  A cold beer is recommended.  A good time is always had by all.  Dove hunting for many of us will always be a yearly passion.