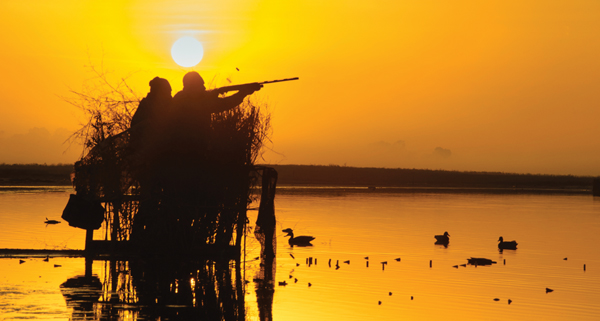 Texas duck hunters are excited about the prospects of the upcoming 2013-2014 Texas waterfowl season, but on a local level it remains to be seen how poor habitat conditions along the Upper and Middle Texas Coast due to prolonged drought and the severe decline in rice acreage will affect bird numbers and hunters’ success.

On the national level, duck numbers look strong… not quite as good as last year, but plenty good enough to justify the effort. According to the USFWS, the total breeding duck estimate in the traditional survey area was 45.6 million birds, a slight decrease from last year’s total but tied with the 2011 estimate, which was the second-largest population on record. Most duck species populations remain above their long term averages.

But as Texas hunters are becoming all too familiar with, good numbers of ducks up North don’t necessarily equate to good hunting down South as a variety of factors…notably temperature and precipitation, are more determinative to hunting success. With the general trend to warmer winters, Texas hunters often find themselves praying for cold weather to force the birds down to their ancesteral haunts… and usually wondering if anybody up there is listening.

The warmer weather coupled with the massive increase in corn acreages planted in the Midwest as allowed the birds to winter far to the North of their historical wintering area. To complicate matters, due to the high carbohydrate content in corn, the birds are able to ride out bouts of cold weather, which in recent history seem to be of shorter duration followed by warm ups. Whereas, the birds used to leave in advance of cold front, now they…especially mallards and large species of Canada geese, gorge on corn, hunker down and wait for the warmer weather to return. Eventually, they must leave but they wait as long as possible and travel less distance when they do actually move. And other waterfowl species are adapting as well.

Truth be told, most of today’s readers have never seen a reliable flight of mallards and Canadas on the Texas Coast. But if you ever talked much to your Grandpa…or maybe your Great Grandpa, you know they used to be the main targets around here. By the early 1960’s most of them had started wintering North of us due to changed agricultural practices up North, the final decimation of the last great Texas freshwater marshes due to development, subsidence and increased salinity, construction of large reservoirs, etc. As most of us have known it, this is the Land of Snow Geese and Pintails.

But that is changing too. Due to the decline of rice acreage and our marshes…largely due to some form of development, the snow geese have taken a shine to the Mississippi Delta…fly over it sometime and you’ll wonder why anything would ever leave there to fly over 500 miles of pine trees to come to what’s left of the Texas coast. And the pintails have moved on down the coast to the still expansive seagrass beds, but not without consequence…biologists suspect that one of the leading factors linked to the decline of the pintail population is that without rice the pintail hens leave Texas to return North to breed in poor condition, which both increases mortality and decreases nesting success.

As they say, the only thing constant is change. Usually it’s a gradual shift that cannot be appreciated without time and hindsight. But with regard to waterfowl hunting around Houston, for the most part we are probably going to experience a jolt this year due to the massive and unprecedented decline in rice acreage south and southwest of Houston. 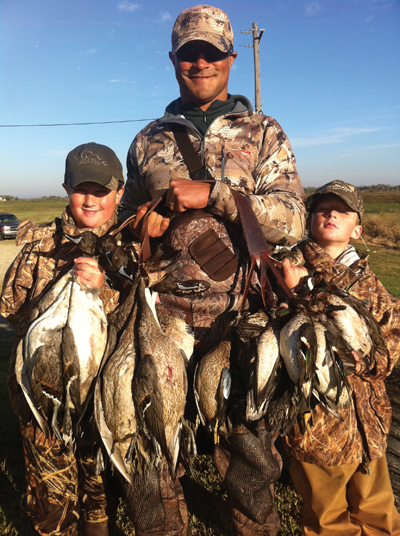 Peyton Parker and Sam Parker with their best hunting buddy, Jeff Malonson of Houston, Texas and a limit of ducks taken last season at 2 Bayous Lodge in Brazoria County, Texas near Angleton.

Due to prolonged drought, for the second year in a row the Lower Colorado River Authority (LCRA) decided not to sell water to rice farmers. This is a big hit. The bulk of what is left of rice in Texas is in the Colorado River drainage…Eagle Lake, Wharton, Bay City, etc. Sure there are some farmers who grew rice on wells and the guys in Garwood on the Lehrer canal system (which has the senior agricultural water rights on the LCRA) grew some rice but nothing like normal. The Pierce Ranch grew 700 acres of rice compared to its normal 4,500 acres…and what they grew is seed rice which is inferior to waterfowl for variety of reasons.

For most of the summer it looked like the farmers on the Lehrer canal system and Brazos River were going to be okay…decent acreages and good crops. Then came the next shot, both the Lehrer and Brazos shut off second crop water…which is a second “ratoon” rice crop grown from the stubble of the first rice crop that is typically harvested in July. Ask any rice farmer and they’ll tell you that the first crop pays the costs…currently about $1,000 per acre, and the second crop is profit. And the folks at John Deere don’t care….they still want payment on the $250,000 tractors, combines, etc. So the farmers are in a bad spot. And so are the birds.

The big problem as far as hunters are concerned is that second crop of rice is cut in late October, which leaves ample waste grain for the birds. Waste rice from the first rice harvest is long gone by the time the birds arrive in the fall. The presence of grain provides a large enough food source when coupled with what’s left of natural habitat (which ain’t much) and man-made habitat such as moist soil units. Sure if it rains a lot, this whole country will flood and the birds will respond, but lots of water usually means scattered birds and tough hunting. And, while some of our area is still under drought conditions, in general we’ve gotten some decent rains that have at least started to restore soil moisture thereby enabling moist soil and aquatic plants to emerge, but the landscape is still suffering from the drought.

The point of this cheery account is that if you want to kill ducks you’d better start finding some decent habitat…pronto. It may be hard to find but it can be done. I manage 2 Bayous Lodge adjacent to the Brazoria National Wildlife Refuge near Angleton, Texas. We have been spending our summers swatting mosquitoes and making habitat for longer than I care to remember. If you have a place, like the work (which probably means you are a masochist) and put in the time you can have excellent hunting in the shadow of Houston.  I fear that the days of just showing up on a pond on opener, throwing out a bag of dekes and killing a limit are coming to a close to being over. The guys that consistently kill ducks today either work for it or pay handsomely for it. Food for future thought.

If you haven’t leased land yet, you need to get moving. If I had to pick an area for a long term lease, I’d seriously look east of Houston in Chambers, Jefferson and Liberty Counties. The reason being that this area is serviced by the Lower Neches River Canal System, which has much more rainfall and far fewer people utilizing it. Rice has made a major comeback over there. Up until recently rice had declined over there more than any other region in the State, but it looks better over there than it has in 20 years. I suspect that with the current trends that area will continue to develop and, if the rains don’t return, it will become the largest…and maybe only, rice producing area in Texas. Plus they have the biggest chunk of what’s left of Texas freshwater/intermediate marsh and enough rain to keep it somewhat viable….it’s not what it once was, but the guys willing to brave the ‘skeeters, mud and cow crap traversing  the marshes from Smith Point East to Louisiana still seem to do okay.

For the guys that hunt the coastal marsh and bays southwest of town, the problem y’all have is that the drought increased the salinity in the bays, bayous and associated marshes which seriously reduced food production. The Justin Hurst WMA near Freeport reported slow teal hunting and while their ponds were wet, food is scarce and the birds weren’t there. Matagorda County didn’t seem to fare much better…guys that hunt near Mad Island had slower hunting than experienced in many years. In general, I’d do a lot of scouting and try to find areas of better habitat. Areas regularly influenced by tide without freshwater to offset the salinities are probably devoid of food, but if you can find areas closer to freshwater inflows you should find better conditions. If you can make it to the seagrass beds from Port O’Conner South, things should be pretty much business as usual…. the bulk of “our” ducks now spend the winter there.

No matter where you hunt, if you are serious about being successful in an area with 6,000,000 people and a declining habitat base, you need to at least be able to identify important plant species utilized by waterfowl, understand where such species are likely to occur and if at all possible enhance their presence. My advice is to pick up a copy of Charles D. Stuzenbaker’s “Aquatic and Wetland Plants of the Western Gulf Coast” to aid the search… it’s hard to know a plant’s value to waterfowl if you don’t know what it is.

Of particular importance is the ability to identify widgeongrass, which is a submerged aquatic plant heavily used by local waterfowl. It is a high value plant, but of more relevance this year is that it can tolerate relatively high salinities and grows very quickly once salinities are reduced…which the recent rains have done. I have a pond that has a high salt content and was dry all summer to the extent to nothing grew there, but since receiving some decent rains in mid-August it has grown a very good crop of widgeongrass. The recent rains will continue that trend until the cooler days of Fall take hold and slow down growth. Mother Nature does a good job of playing catch up when the conditions allow….something is always waiting to take advantage of the improved conditions.

All the duck hunters I know are praying that the rains will come, the drought will go and normalcy will return to the prairies of the Upper and Middle Texas Coast. But it would be short-sided to say that this drought will not have long lasting effects on the landscape, especially with regard to the Texas rice industry, to which our local waterfowl populations are closely tied. As a consequence, the presence of large numbers of waterfowl…the natural by-product of lots of rice, will probably become more of a rarity. Good habitat and numbers of waterfowl can exist even under these circumstances but it takes work….and a few people doing the brunt of it will not replace what has been lost. If you are serious about hunting waterfowl, this year may be an omen of things to come…and hopefully a catalyst to ensure that the birds find a better place when they return next Fall.