Waterfront Lifestyle in Bay Area Houston – What Does That Look Like? 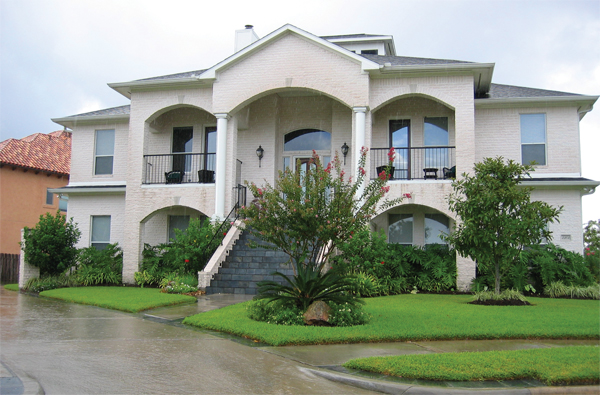 Bay Area Houston is full of residential nooks and crannies where houses with waterfront access are home to a variety of people.  From condos with gorgeous lake views to single family dwellings with a private marina, there are an abundance of choices for those who want to partake of the coastal life from their own backyard.  Brian Yates and Joanna Yates are a couple that thoroughly enjoy the coastal lifestyle offered in Bay Area Houston.  They not only live and play here, they work and give back to the community as well. 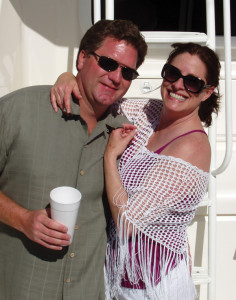 Married for 20 years, Joanna and Brian began their courtship and life together in big city style, near the Houston Galleria, where Joanna worked in the modeling industry.  However, when it came time to build their first house together, Joanna was won over by Bay Area native, Brian’s, tour and introduction to all the fun and lifestyle benefits of living on the water.  “I might have started out kicking and screaming at the idea, but soon was thinking I could so do this…” says Joanna.  So they bought a lot and started building in 1999.  And that lot grew into more than a house and became a gateway into an adventure.

Located in League City near South Shore Harbour on a peninsula at Clear Creek across from the nature preserve/bird sanctuary at Nassau Bay, the property has a private marina with deep water access to the Gulf.  Views of Clear Lake, Clear Creek, and Nassau Bay have brought the wild life and nature literally into their backyard.

“I was taken out of my comfort zone and engulfed in new opportunities,” says Joanna.  Instead of buildings and neon lights, there were pelicans, herons, and deer.  Joanna chose to embrace her love of nature and became a Galveston Bay Master Naturalist volunteer.  She can now identify the difference between the myriad waterfowl which inspired her to write her children’s book series, “A Bird’s Eye View of Life”; character building stories utilizing Black Headed Herons, Roseate Spoonbills, White Snowy Egrets and more.  “While this area was home to Brian, I literally had to re-invent myself,” says Joanna.  Wanting to meet new girlfriends she founded The Women Who Wine of Texas, a 501c3 organization that raises money for local charities.  She has produced fashion shows for several charitable foundations in the Bay Area and also has a flourishing business in motivation and self improvement called People Productions. 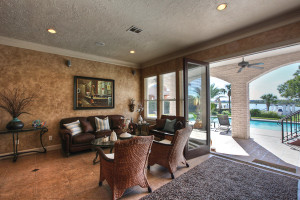 Brian is a well-known commercial real estate developer with current projects spanning from League City to Galveston’s Historic Strand District.  Brian brought the first Starbucks to League City and Emergency Room to South Shore Harbour.  He is a hands-on developer and valued for his personal management style.  “We built one of the first homes on our block, and I saw the potential of what this peninsula would offer in lifestyle and opportunity,” says Brian.

The Yates’ house supports the open hearted and freedom loving vision of its owners, with 3800 square feet of rooms that show 360-degree water vistas that take your breath away.  You barely notice the warm wood accents and slate floors (a decorator’s delight) because the beckoning of nature calls your eyes to the outdoors.  The bottom floor has an entertaining great room and long granite bar, that fully opens to a large patio, an almost Olympic-sized pool, and a practically runway-sized manicured lawn with a pavilion near the water.  Fish jump in that water, begging to be tonight’s dinner, and blue crabs await becoming your next feast.  All from the backyard.

Joanna and Brian have hosted a multitude of events and parties, including three weddings, 50th birthdays and anniversary parties with hundreds of people in attendance.  They have hosted smaller backyard gatherings, for example, enjoying the hot air balloons that fill the sky during Ballunar Festival and watching the 4th of July fireworks while floating in their pool.  Boat lovers themselves, they have hosted the annual Blessing of the Fleet for Lakewood Yacht Club’s Mosquito Fleet Swarm, with up to 20 boats docking at their marina for the afternoon. Brian agrees that the call of water and this idyllic lifestyle is actually in his blood, and Joanna refers to living by the water as a zen-like, healing experience. 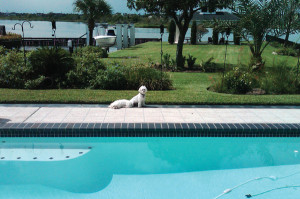 However, life does evolve, as do our lifestyles.  Joanna and Brian are flipping the switch and adjusting their lives to include more freedom to travel.  Their home and all it offers is for sale, and they plan to divide their time between their Galveston property, a place back in the City, and parts unknown.  The goal is to pare down their lifestyle to allow for traveling on the spur of the moment, and yet to stay involved in the community they have come to know and love.  Will they miss it?  Yes.  But individuals with the same vision for a waterfront lifestyle, gift for entertaining and a desire for a private oasis will discover it and make it their own.  And that wildlife isn’t going anywhere.