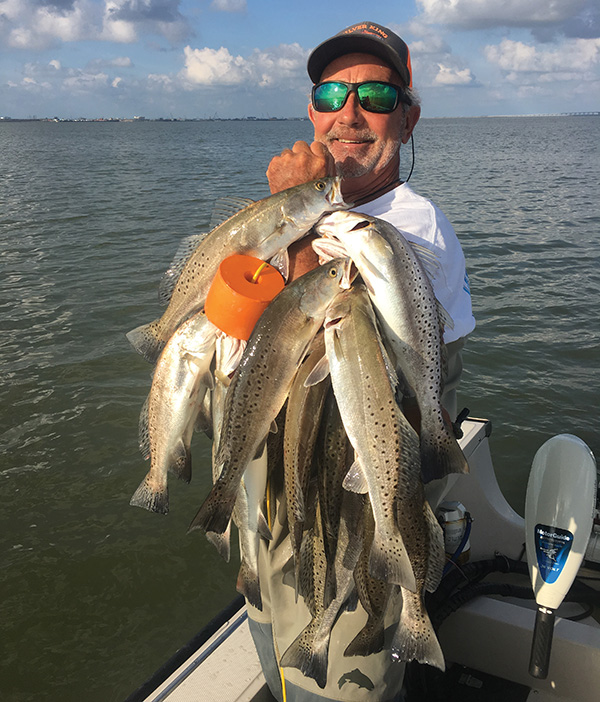 Capt. James Plaag with a good stringer of trout.

From trout to tarpon with Capt. Plaag, the 36 year master guide of Silver King Adventures

Where did you grow up?

I’m from Houston but I grew up down here near the water. My family has had houses here since the 1950s. So I spent all my youth down here. We had a place on Chocolate Bayou and in 1967 my family built a house in Jamaica Beach. I used to watch ZZ Top play down there on the weekends.

How long have you been guiding?

We had been trying to catch tarpon, but we didn’t know what we were doing at the time. But we had some people interested in going, and it took us a while to wire it up but we got it going. I was tarpon fishing in Louisiana some at that point too, and that’s how we started. 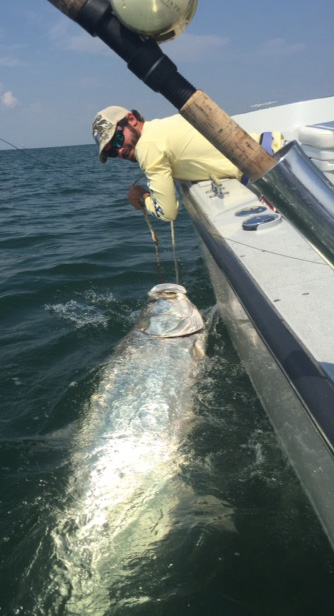 Silver King Adventures is no stranger to large tarpon.

So it all started with Tarpon?

Well, yeah that’s how the name came. One of our customers gave us that name and got roused a bit, and he made us a nice little ad. He was in that business.

What is your fishing specialty or target fish?

Right now we are tarpon fishing. We’ll still go trout fishing if the beach is no good but we’d rather be fishing for tarpon.

So you’re spending a lot of time a couple miles off the beachfront?

Sometimes we’ll get 10 miles out. I’ve caught them in 67 feet of water down to 7 feet of water; it all depends on where you can find them. They are the hardest fish on the planet to find and catch.

What lures/baits are you using for tarpon?

We quit fishing with bait maybe about 15 years ago. We make our own little lures. We still use Coon Pops. Coon is one of my best friends. I learned a whole lot from him; he’s probably the best tarpon fisherman I’ve met in my whole life. We make our own stuff, but we got a lot from him.

How did you get your start fishing?

I cut my teeth fishing the canals at my Grandma’s house in Jamaica Beach. I was about 8 and would ride my bike to the water. With dead shrimp I would catch croaker, hardheads and little redfish. If it bit, I would catch it.

There’s two moments. We caught a really big tarpon one year. The fish was 6’9” with a 50 inch girth and weighed 238 pounds.

The other is from Panama. We were on the Gotcha in Panama City and we took it to Piñas. It’s probably the finest place I’ve ever been in my life. We saw about 15 or 16 fish, caught about 8 or 9. Half blues and half black marlin. 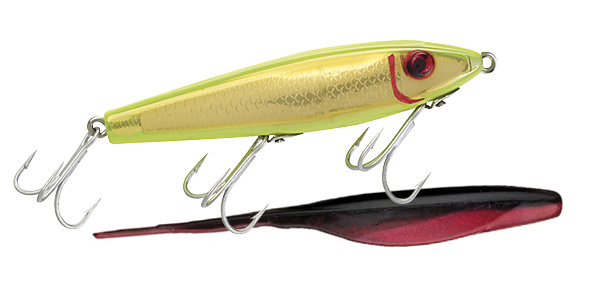 If you could only have one soft plastic and one hard bait, what would they be?

I’d take a 51 series MirrOlure in chartreuse/gold and a red shad Bass Assassin. I work for both of those companies, but if I didn’t, the answer would still be the same. I put my son through school on that red shad color.

What is the biggest mistake you see fisherman making out there?

They don’t put in the effort. There’s the old saying that you get out what you put in. Fishing is not just throwing your stuff out there and getting them; it doesn’t work like that. If just want a boat ride, that’s all good and fine, but if you actually want to catch something, you have to put in more than just a lackadaisical effort.

What are some things anglers in the Galveston Bay Complex should key in on during September and October to be successful?

September is a hard month for trout fishing. It’s a transition month. You have a major spawn in April and a little bit bigger than a minor spawn in September. September is probably one of the worst months to try and catch a trout. You can, and someone might tell me “Man you’re stupid, we kill them in September.” Yeah, well you might, but by and large it’s not that good.

If the weather is good then September is the best month to catch Tarpon. October is the same for those first three weeks if it’s calm. That’s when the big fish are there. It’s a really good month. October is also a good trout fishing month. Those birds will start working and it gets pretty easy. But September can be tough inshore. For me that month is made for tarpon fishing and dove hunting.

Do you have a favorite tide stage to fish?

It depends on the time of year and where you are fishing.  If you’re fishing the marsh during winter, then you got to have an outgoing tide. If you’re fishing near the ship channel, deep water shell or well pads, then the fish will be biting on the incoming tide.

What is the biggest change you’ve seen in our area from when you first started compared to today?

The biggest change? It’s a thing called a cell phone. It totally ruined fishing and I’ll throw croakers in there, too. It used to be that you could stay on a school of fish for two weeks, now you can’t stay on them for 2 hours before someone picks up the phone and tells the world “Hey I saw this dude on the fish over here and they’re getting them.”

The information highway brother…the coconut telegraph is a killer. 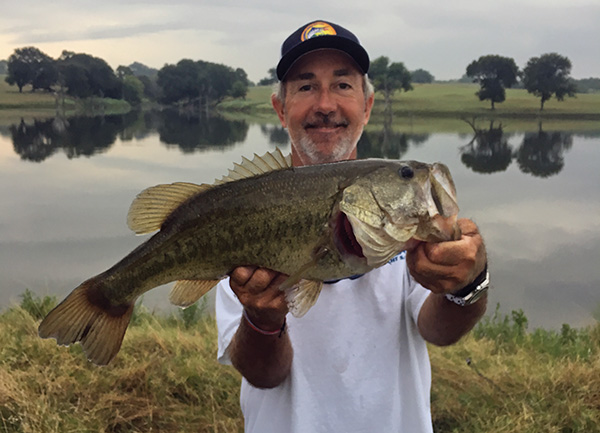 James with a 5 pound bass.

Do you have a new recently discovered lure or technique you’d like to share with our readers?

In these last three years we’ve been fishing a lot like they fish swimbaits for bass. Instead of jigging them, we use them like a search bait. That’s where the paddletail comes into play, like a Bass Assassin Sea Shad. Once you get your speed down and find the fish, whether it’s the bottom or top of the water column, it’s easy. That way you can tell clients to cast, let it fall for X amount of seconds and then bring it back on a medium retrieve.

Favorite place you have ever fished?

Is there anything you’d like to see changed in the current regulations?

Do away with the croaker. Sooner or later the guides are going to fish themselves out of business and everyone will be wondering why. What it enables you to do is to target the individual fish you wouldn’t catch otherwise. I could go out there with a lure and I might catch one and I may not, but you drag that croaker through there and you can target the individual big breeder fish.

So you’ll have one boat load up with 15 or more 3 – 5 pound trout before they head in. Then you’ll have 30 boats out there doing the same thing. Add it up in pounds and it doesn’t take long to see the problem.

If you want to fish with finfish, then get you some piggie perch. Put some effort into it. Piggie is a better bait than a croaker, but you have to put some more effort in to use them.

Another thing I’ve talked about is putting a slot limit on the trout. Knock the minimum length down to 14 inches so Joe Blow can go out and catch his 10 fish. And then anything from 20 to 25 inches just put them back. Most customers want fish they can keep, so they could box the smaller eating fish and let the big ones go.

Dove hunting. But with fishing we go with the old saying “Can’t stop, won’t stop.” That’s what we do; we fish. Cameron, my son, is the same way. It’s what we do.

Do you fish any tournaments?

I’ve fished a couple tournaments this year. I’ve been lucky enough to place in just about every one of them. I don’t go after it hard anymore though. Them boys that fish those tournaments in wintertime, they’re good, they catch them. They’re young and they’ll make long runs.

We fish the Seabrook Saltwater Derby every year.  We’ve won something in that one just about every time. I fish with Jason Nolan. He just called me about it, it’s coming up on September 29.

Uh oh, we got some competition (laughs). Team Gulf Coast Mariner will be fishing that one too.

Well I hope y’all do good, but I hope I do better (laughs).

How can someone contact you for a guided trip?