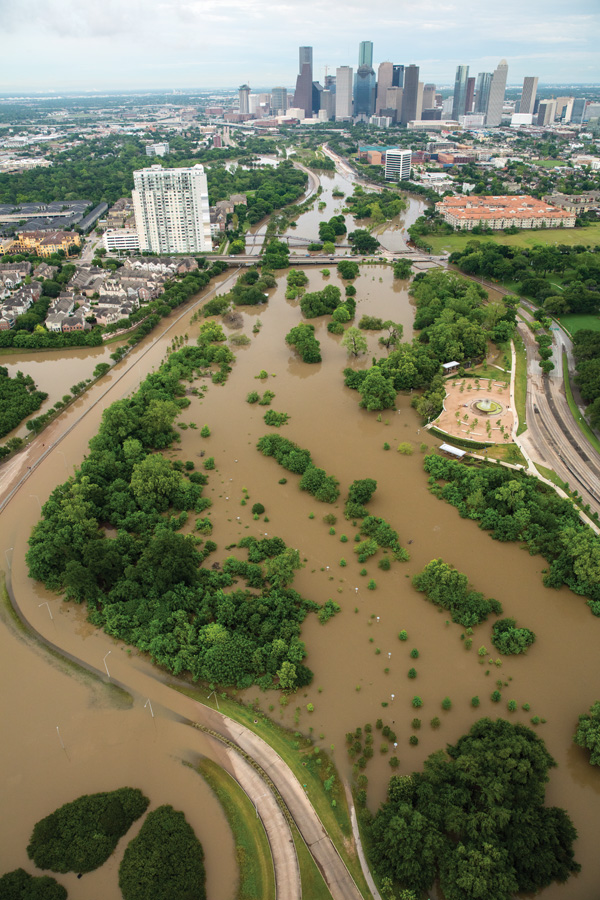 Buffalo Bayou spills out of its banks between Memorial Drive and Allen Parkway on April 18, 2016 after heavy rains. Photo by Jim Olive.

Spring rains have hit Houston, and at the time of this writing, the Bayou City is flooding once again.

While offices are closed and workers stay home, the clock ticks on the 30-day public comment period for a Texas Department of Transportation (TXDOT) document that will affect future permitting on roads, storm water runoff and setting aside land to offset flooding.

The 53-page Permit to Discharge is TXDOT’s first attempt to standardize the agency’s permitting process across the State of Texas as it relates to water discharge.  The nation’s second largest environmental agency, Texas Commission on Environmental Quality (TCEQ), has the document under review, and concerned environmentalists want to have time to study the permit and recommend changes.

Attorney and Galveston Baykeeper Board Member Jen Powis first heard of the document a couple of days before our talk on April 11, 2016.  Her requests to TCEQ for a copy in that first week did not produce the draft on her desk, but she has since obtained a copy of the document filed as Permit No. WQ005011000.

“Impervious surface is my concern,” says Powis, who lives in Houston.  No one doubts that flooding in the nation’s fourth largest city is due to more roads, higher density living and less surface area to absorb water when rainfall occurs.  What concerns Powis and her Baykeeper colleagues is how the State is going to allow more flooding through regulatory holes in the system   For about two years, she and other members of Galveston Baykeepers have been watching TXDOT’s moves toward “one, big statewide permit” system that could pave the way for more development and less saving of water-absorbing land.

About 27 states have adopted the policy of one permit for their entire transportation system, but with more highway miles than any other state, Texas has an unmatched amount of paving along with a variety of landscape to consider.

Till now, TXDOT has issued permits based on the specific conditions of each community.  Powis favors this approach, adding, “I’m a strong proponent of local solutions for specific places.  We all know that Houston looks very different from the Edwards Aquifer.”

“A lot of the time we try to build our way out of the problem,” say Powis, “versus preserving land at the beginning.”  She and the other Galveston Baykeepers want to see TXDOT have more foresight in the allocation of green infrastructure.  “The burden should be on the developer to incorporate mitigation in the project,” says Powis.  She’d like to see the revised TXDOT permitting system require developers to set aside land to offset the impervious cover they create.  In an area like Houston, only one enforcement body controls such a process now, the U.S. Army Corps of Engineers (USACE), and the rule doesn’t apply to all conditions.

USACE has jurisdiction over all federal waters, including wetlands under the Clean Water Act (CWA).  But under CWA, land is only a wetland if it lies within the 100-year flood plain or connects to a body of water under federal jurisdiction.  Since most of Houston’s prairie and inland wetlands are technically not termed as wetlands under CWA, developers have been able to build on these parcels without mitigating or even going through the federal permit process.

Of the couple of Houston parcels that Jacob cites as unprotected wetland “already gone” is Generation Park, a 4,000-acre business development less than a mile west of Houston’s drinking water source, Lake Houston.  Of the 4,000 acres, Jacob says that 67% (1,300 acres) were wetland.  The master plan calls for allocating less than 20% to green infrastructure.  In this case, if TXDOT had such a rule in its permitting structure, it could help protect both Houston’s drinking water and the water quality of Sheldon Lake State Park on Generation Park’s south boundary by requiring mitigation.

Jacob has been following the dramatic loss of inland wetlands for years.  He serves as Director of Texas A&M’s Texas Coastal Watershed Program.   In a 2014 Texas A&M AgriLife Extension report, Jacob notes that in the 12 years between 1992 and 2010, Harris County and the 7 surrounding counties lost over 30% of their freshwater wetlands.  “Coastal, tidal wetlands – about 10% to 20% of the State’s total wetland inventory – are not under threat like the prairie wetlands,” says Jacob, where most of Texas’ wetland inventory lies.  And, those prairie wetlands dot the periphery of Houston’s urban sprawl, mostly in tracts less than one-acre in size.

Jacob calls Texas’ prairie and inland wetlands the “lymph nodes” of our ecology.  “They are cleaning the water, purifying the water.”

To find out more about how Galveston Baykeepers is working to protect Texas’ coastal water quality, visit: www.galvestonbaykeeper.org/threats

« Frothing Over Spring Surf
Another Successful Keels and Wheels »