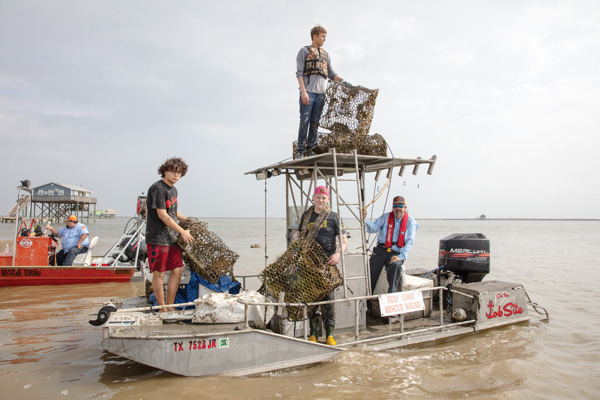 The fisherman had been dead for quite a while, and now his crab traps were full.  On the morning of Saturday, February 17, 2018, as the sun came out and the tide retreated, volunteers in airboats found the metal cage crab traps among the grasses in the backwaters of Christmas Bay.  They were full of crabs.

They also found 50 sheepshead trapped at another location, and, like the crabs and all other marine life they find in the traps, they released them.  “Last year, we found a turtle in one of the traps,” says Jim Olive who organizes the effort every year.

When he started the Christmas Bay Foundation years ago, Olive was working to save the sea grasses from shrimpers, and keep a pipeline of human waste from dumping in the shallow pan bay of Follet’s Island.  Now, years later, the shrimpers have been banned, and the pipe re-directed into the Gulf.  The sea grasses flourish, and Christmas Bay has become a popular place for recreational fisherman.

The crab fishermen still place their cage traps out in the waters, but not all can be recovered by the third Friday of each February.  That’s when the State of Texas calls a 10-day closure on crab trap fishing, allowing volunteers to collect what has gone adrift or been forgotten.

“They are a pernicious, lethal killer,” says Olive of the traps.  “When they are abandoned, the crabs die in the trap; the scent that they put out attracts more crabs to the trap.  Those crabs die, and it’s just an ongoing cycle.”

This year, Olive and 14 other volunteers from Boy Scouts, Brazoria County and Texas Parks and Wildlife manned 7 boats for 6 hours, fanning out into the lakes and bayous that eventually feed into Christmas Bay.  They covered more area than in years past.  “It was definitely our most extensive coverage,” says Olive.  In all, the group collected over 60 crab traps.

Bruce Bodson of the Lower Brazos Riverwatch was one of the volunteers.  When he returned to shore, he stomped on the cages he’d collected so they couldn’t be used again.

Since 2002 when the law took effect, over 33,820 abandoned crab traps have been retrieved from Texas coastal waters, from Sabine Lake to Brownsville, with volunteers in the Galveston Bay area and San Antonio Bay consistently collecting the most traps.

To join the effort next year: