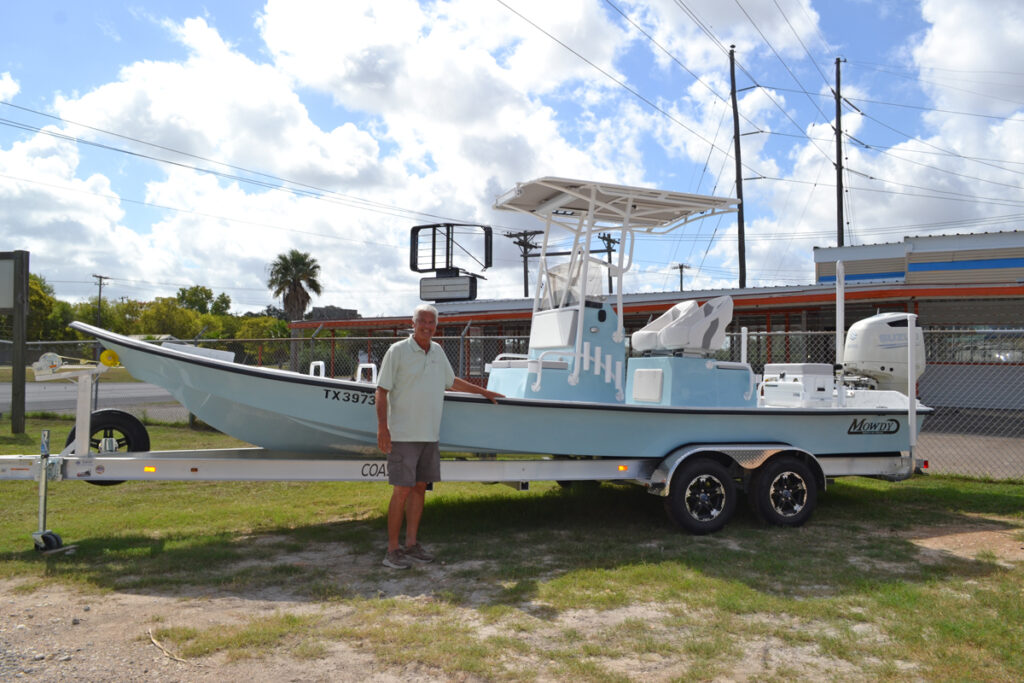 Robbie Gregory of Mowdy Boats stands with a fine example of their 25’ Catamaran. This is their most popular model. 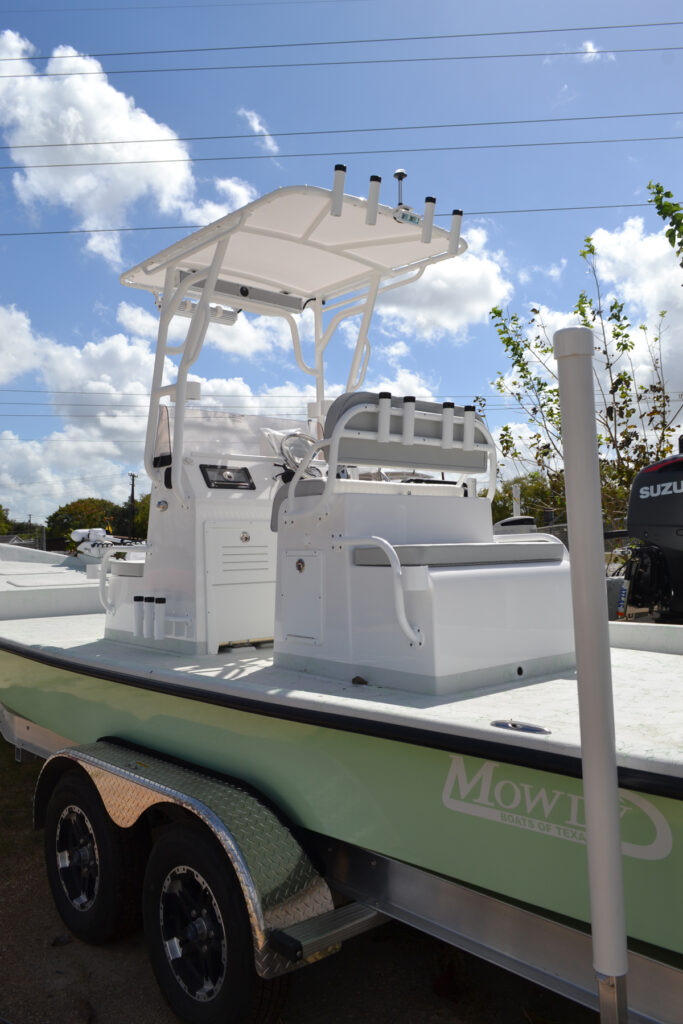 Photography and interview by Kelly Groce

Mowdy Boats have been built since the 1970s by Mr. Hal Mowdy of Victoria, TX. Hal was the patriarch of all the Texas boat builders. Himself, along with Steve Bell of Shoalwater Boats and Mr. Haynie of Haynie Bay Boats, were ahead of the pack and started everything we see on Texas waters today. Mr. Mowdy was a one man show and made all his boats in one color, Mowdy gray. If you wanted a boat, that’s what you were getting and it may take 7 or 8 months to get your finished boat. Mr. Mowdy was extremely dedicated to the quality and the hand craftsmanship to each and every single one of his boats.

Mowdy Boats is now located in Port Lavaca and led by Frank Crappito and his managing partner, Robbie Gregory. I was fortunate enough to take a quick road trip down to meet with Robbie, who had just returned from Houston where he had gifted each of the winners of the largest trout division of the CCA Star Tournament a Mowdy boat. Besides the Star Tournament, you’ve most likely seen these beautiful boats on the water since Texas Parks and Wildlife, Texas Game Wardens, Coastal Fisheries, and the U.S. Fish and Wildlife Service, all run Mowdys. Robbie gave me a personal tour of their facility and educated me on how each boat is built one at a time by master craftsmen. From swampy back-bayous to fishing out in the Gulf, Mowdys can navigate through any water condition. Enjoy.

How did you and Frank get involved with Mowdy Boats?

So the way this company came about was in 2011 when one day Frank and I were fishing on his 22’ Mowdy that took him 3 years to find. Frank and I were just shooting the breeze and talking about how great these boats are. Frank said, “Wouldn’t it be something if we could buy the mold to this 22’ and build ourselves a couple of boats?” Frank then asked if I knew Mr. Mowdy. Having guided in Port O’Connor for 20 years I know just about everybody. Frank suggested I go talk to Mr. Mowdy and see if he will sell us the mold. 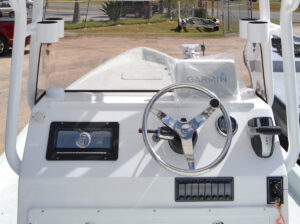 The next week I met with Mr. Mowdy and asked if he would sell us the mold to the 22’ and he said, “No I won’t sell you that mold, but I will sell you ALL of my molds and ALL of my equipment. Everything but the building.” I called Frank and told him that Hal won’t sell the one mold, but he wants to sell everything. I know it was a great opportunity especially since the boats already have such a great reputation. Frank said, “If I back it, will you run it?” Without hesitation I said, “I’m in.” So basically we did a hand written contract and a week later we paid Mr. Mowdy.

After that, we started looking for a place. I live here in Port Lavaca and we found this facility here. We had no clue on how we were going to build the boats. After fishing one day, I was at Clark’s in Port O’Connor, which is a marina, hotel and restaurant. I was there eating and my waitress said, “What do you do?” I told her I’m a fishing guide, do some building and developing, and now a friend of mine and I just bought Mowdy Boats. She said, “My husband builds boats and he needs a job, would you like to talk to him?” It was a God send. It turns out her husband started with Mr. Haynie of Haynie Bay Boats when he was 17 years old. He is now in his ‘50s, but that’s all he’s done his entire life. After talking to each other, he agreed to come onboard to help and he brought with him a family of a father and 3 sons. That’s all they’ve ever done their whole life is build these kind of boats. So we started with the most experienced crew of boat builders that you could ever imagine. From there, we started building boats.

The 25’ Catamaran, which is our most popular boat, is amazing. There’s no other boat out there like it. It runs incredibly shallow, but it also takes the water well because of the entry. It’s stable because it has all the tributes of a catamaran with the full tunnel. You can get on one side and jump up and down and it just sits there, it doesn’t rock around. Mr. Mowdy had only sold maybe 7 or 8 of those style boats, but as we began to get them out there and some of the fishing guides picked up on ‘em and started running them, 9 out of the 10 boats we build now are the 25’ Catamaran. Everybody wants it. Word of mouth has definitely made it what it is. 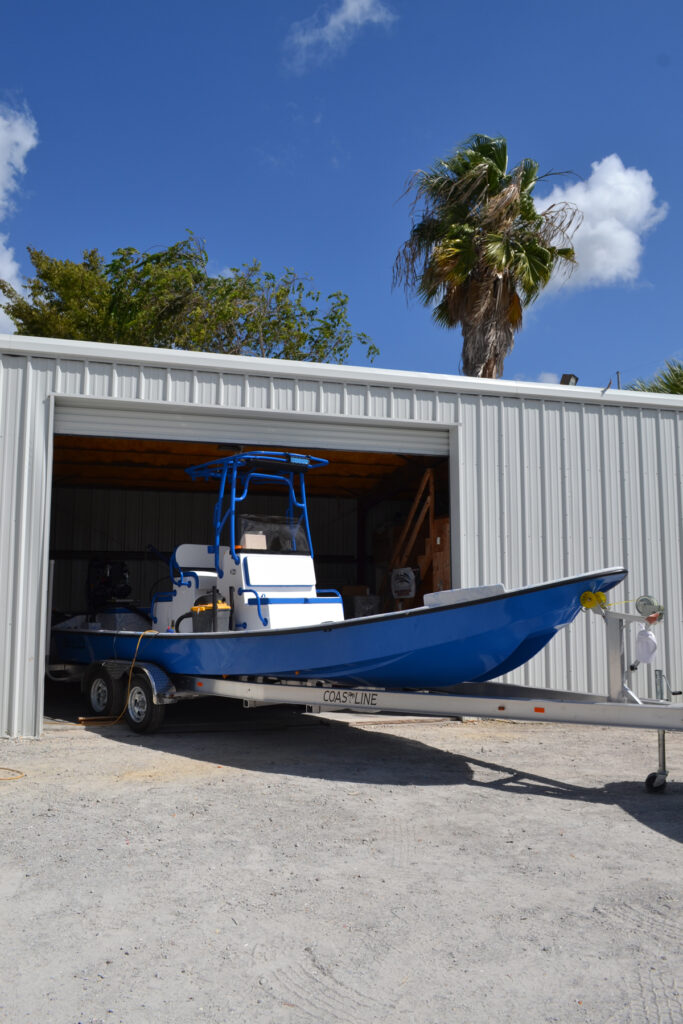 Another 25’ getting the final touches. This boat was built totally to the customer’s wants and needs.

How are Mowdy Boats different from other boat companies?

Mowdy is different from other companies because this is not a cookie cutter boat. So when I build your boat… I mean I build your boat. You get to tell me what color, pick the upholstery, decide where you want this or that. It’s totally custom. We are limited production, so we do about 50 boats a year. Which is a good thing because it keeps the price point high and you as an owner keep the value up on your boat. One thing that’s for sure is that you cant find one for sale, well maybe one or two, but people don’t sell their Mowdy. They are lifelong boats. They hold their value. Some guys will keep their boat for 5, 6, or 7 years and sell their boat for more or as much as what they paid. That is unheard of when it comes to boats.

We 100% foam fill our boat, from the top of the deck to the bottom of the hull. There is no void. It’s all filled with 2 lb. closed cell foam. The foam makes for a quiet ride that you don’t get beat up on. The boat just slices through the water. Little things like that set us apart from other boats. We block the bow of our boat so when you take it off the trailer it doesn’t hang off the reverse gunnel. By having a reverse gunnel on our boats, the water hits the reverse gunnel and throws the water down making it an extremely dry ride. Our aluminum is made at another facility, but it’s our deal. All of our cup holders are insulated cup friendly, like I said it’s the little stuff. But if you fish, you know how important all those little things are. We listen to our people and we aren’t close minded. We are here to build to your taste.

Another great thing is, you can’t sink a Mowdy. Think of a surfboard that is totally encapsulated. You can punch a hole in it, but you can’t sink it. That’s a Mowdy. The 2 lb. closed cell foam can’t adsorb water.

When your boat is done, it comes with tags, registration, and everything else you need. It is ready to be picked up and put in the water. We build this boat for you and the only thing I want to see from you once you pick it up, is fish pictures.

How did you get involved with the CCA Star Tournament? 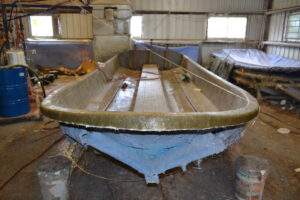 A 25’ Mowdy Catamaran in the beginning stages of being made.

My partner Frank has a good friend, Bill Kinney, who’s head of the Star Tournament. There was an opportunity that came available for the prize boat for largest trout divisions for the upper, middle and lower coast since Blue Wave Boats dropped out. Frank and I talked about it and said it was a great opportunity with CCA being such a good organization and they do a lot of good with scholarships for kids. If you are a saltwater fisherman and you aren’t entered in the Star Tournament, something is wrong with you. The prizes are great. This year there was 51,000+ entries in the Star Tournament. So we signed up for a 5 year agreement. This was our 4th year, and we are going to renew for 5 more years. Our business has definitely increased being involved with them.

Robbie and the rest of the friendly staff at Mowdy Boats welcomes you to stop by the facility in Port Lavaca to answer any of your questions or to get your new boat built and rigged. Tell them Gulf Coast Mariner Magazine sent you.

« The Come and Take It Tournament: Fishing, Camaraderie and Fundraising
Hosted Trip to South Padre Island »