Story and Photos by Brandon Rowan 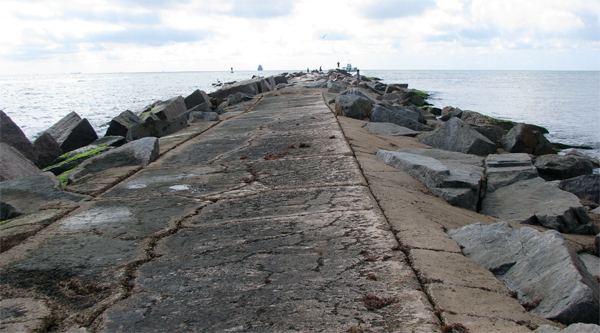 Summer brings about mixed emotions for me as a Texan.

I cringe at the thought of sliding into the oppressive hotbox that my car becomes under a murderous July sun — the buckle of my seatbelt singeing my fingers as I rush to start the engine through fogged sunglasses. On the other hand, the fisherman in me welcomes the light summer winds that bring about ideal conditions for beachfront and jetty fishing, inshore spearfishing and offshore adventures.

The fisherman in me always wins. In early June, I packed up all the necessary gear with my brother and two friends and we snaked our way along curvy U.S. Highway 59 from Houston down to Port Aransas. We opted for a weekday excursion to avoid the crowds that swarm the popular beaches of Mustang Island.  Also, the line for the ferry on and off the island can take well over an hour during busy weekends. We coasted through neighboring Aransas Pass on Sunday evening and were granted an instant ferry ride to Port Aransas. It was the beginning of a great trip. 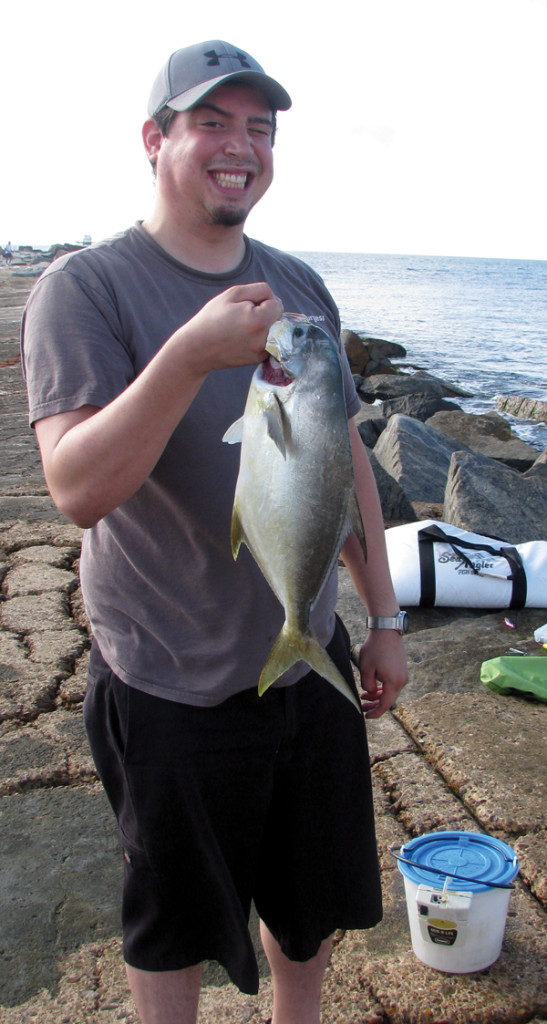 You never know what you’re going to pull up on the jetties. Doug Rowan caught this nice 17 inch pompano while freelining live shrimp off the rocks. This fish made for one hell of a dinner that night.

We set up our temporary home at the I.B. Magee Beach Camp, which offers electrical hook ups, water and a really nice shower house all within a stone’s throw from the beach. Stronger than predicted winds that evening made lighting our dinner charcoal an ordeal and worried my fishing intentions for the next morning. A long drive made for a short lie in my cot before my eyes were pried open by the harsh tones of a 5:45 a.m. wake up alarm. Dawn had arrived.

I got up, unzipped the flap of my tent, stood up and peered uncertainly into the light blue of the early morning. I was greeted by dead calm. Elated, I grabbed the bait livewell and made the short drive to Port A Outfitters on West Cotter Avenue to join the line of bleary eyed anglers waiting for live bait. Upon return to camp, I roused the guys and we began the familiar ritual of rigging up rods and slathering sunblock on sensitive areas. Although, if you are adverse to greasy sun lotion, then I recommend looking into protective clothing. Take a trip to your local Academy or West Marine and you can find plenty of options for water-wicking and sun resistant shirts, gloves and face masks.

My companions and I, armed with a quart of live shrimp, made the careful trek down the south jetty early that Monday morning. Non-slip shoes or tennis shoes with plenty of grip are a must for rock hopping. Golf cleats with metal spikes are even better if you can find them. But the Port Aransas south jetty is a relatively easy walk as far as jetties go. There are many stretches of flat, level rock and relatively few tricky boulder hopping areas. Be careful to avoid slick, algae covered areas on the flat stretches if you can.

We settled for an inviting looking spot near the end of the jetty and eagerly tossed our lines into the calm waters, some of us freelining, the rest using popping corks. It wasn’t long before my bright yellow cork slipped below the surface and I pulled a healthy 15 inch mangrove snapper up on the rocks.

“This one is going on the stringer!” I exclaimed as I wrestled the hook from the toothy fish’s upper jaw. My comrades soon joined me in the catching as we found ourselves hooking into more snapper, spanish mackerel, redfish, pompano and a myriad of other species found along the rocks. My brother was the clear winner that day. He was able to land a fierce fighting 24 inch smack and a 17 inch pompano.

You never know what you’re going to see on the rocks. It was midmorning when a six-foot manta ray absolutely exploded out of the water about 100 yards from where we were standing. We looked around at each other in complete bewilderment, wondering if that really just happened. 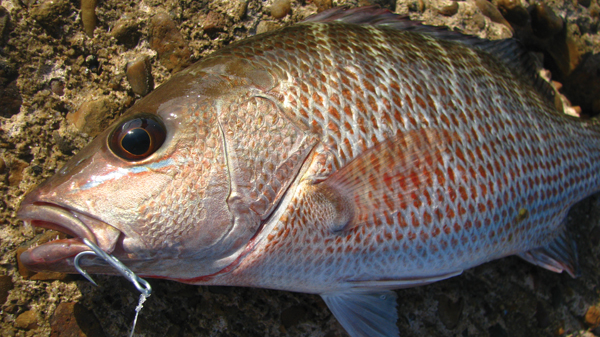 Tasty mangrove snapper are everywhere at the Port Aransas jetties. Some are too small to bother with but we were able to bag several in the 13-16 inch range. There is no minimum length or bag limit for these snapper in Texas state waters.

We had walked to the end of those rocks that morning with live shrimp and traded them in for a stringer of fresh fish—a deal I’ll take any day of the week. We celebrated the rest of the day with plenty of beach time, cold beer and pompano fish tacos served with grilled peppers and onions. I was able to clean the catch at the Horace Caldwell pier, which was a short way down the beach from camp. A small fee of two dollars buys you access to the pier and its cleaning table.

Tuesday, we had intended to fish the north jetty but a long, hard Monday made for a late start the next morning. For $12, beach-goers and anglers alike can take the Jetty Boat at Fisherman’s Wharf across the channel to remote St. Jo Island where the north jetty begins. Although we weren’t too bummed about the extra sleep. The south jetty was good to us and we gladly resumed our location from the day before. The water really cleaned up on the channel side and I was able to get in the water to do some spearfishing. The visibility was a murky 8-10 feet but I still managed to shoot some sheepshead and snapper for supper. It sounds exciting but I would recommend locating and taking a freediving course before attempting any kind of breath hold spearfishing. It is a potentially dangerous activity to undertake.

It was great to get in the water on Tuesday but the fishing wasn’t nearly as good as the day before, despite excellent conditions. The ocean giveth, the ocean taketh away. We drove off the island later that evening sunburned and sore, but with a cooler of fresh fish and a handful of stories. Another trade I’ll take any day of week.