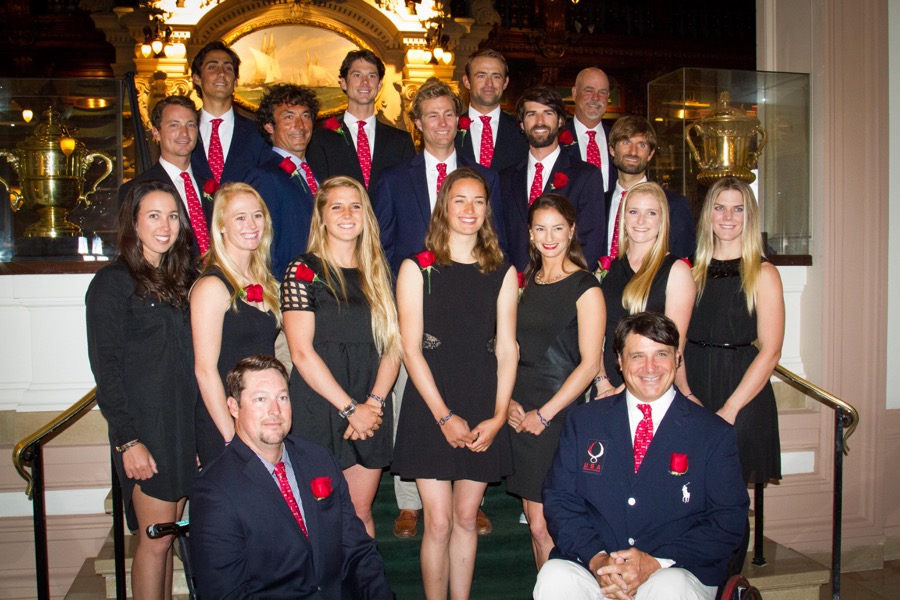 Athletes named to the Rio 2016 Olympic and Paralympic Sailing Teams at the Golden Spinnaker Gala in New York. Photo © US Sailing.

The Gala raised $252,000 for the athletes’ Olympic and Paralympic campaigns, which includes travel, shipping and accommodations expenses, as they embark on the final stretch of their Olympic and Paralympic campaigns in order to reach their medal goals. The SFNY has raised more than $500,000 in the last four years for the teams, and $1.2 million since the foundation was launched.

“The Sailing Foundation of New York is so proud to support so many amazing young athletes on the Olympic and Paralympic Sailing Teams. We believe these athletes should be training and preparing for the Games every waking moment and not worrying about raising money,” said Dean Brenner, the SFNY president. “So we are committed to giving them as much support as we can. We are grateful for all the guests’ generosity at the Golden Spinnaker Gala – and for those paddles raised high during the auction.”

While other countries’ sailing teams are funded by their respective governments and lotteries, the U.S. teams relies on generous philanthropists and corporate sponsors to stay competitive. Nearly 200 people attended the Golden Spinnaker Gala, which included cocktails, dinner and a live auction led by renowned Christie’s auctioneer Lydia Fenet.  Established in 2004, the Gala is held every other year at the New York Yacht Club in New York City and Newport, R.I.

Two-time U.S. Rolex Yachtsman of the Year and America’s Cup skipper Ken Read (Newport, R.I.) served as the evening’s Master of Ceremonies and interviews several athletes on stage during the program about what it takes to be Olympic-class sailors. He stressed the time they spend traveling and training – and noted the sacrifices they make to be the best at their sport.

For more information or to make a donation to the athletes’ campaigns, please visit: www.ussailing.org/goldenspinnakergala2016 or email Dean Brenner at sfny2014@gmail.com.

About the Sailing Foundation of New York

Founded in 2004 by New York Yacht Club Commodore George Isdale, Jr., the Sailing Foundation of New York supports individuals who demonstrate the commitment and the potential to represent the United States at the highest possible levels in the sport of sailing, and the organizations and programs that are committed to growing the sport. One hundred percent of all donations go directly to the athletes. During the last decade, the Foundation has raised more than $4 million for sailing athletes.

About the U.S. Olympic Sailing Team