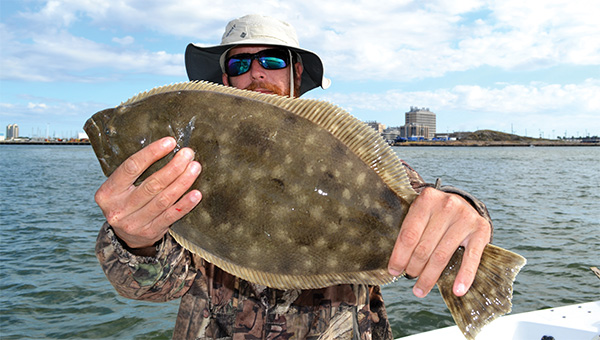 Anglers around the Galveston Bay Complex have reported excellent catches of flounder this past winter and the action is getting better as the water warms and days get longer. This is a refreshing change from not too long ago when sportsmen were concerned about the drop off in catches.

Prior to the turn of the century, our flounder stocks were showing serious decline in both numbers and quality of fish. Liberal bag limits and no season restrictions were taking their toll on one of the most popular saltwater fish.
A bold and unpopular move on the part of the Texas Parks and Wildlife Department several years ago has proven to be just what the stocks of flounder needed. Before we take a look at the changes that took place, let’s go back and see what was happening before the enactment. 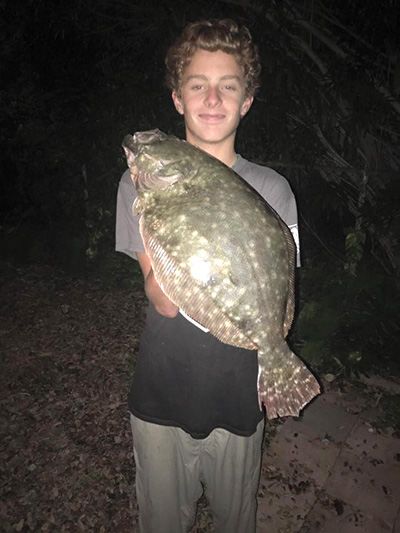 Max Conner, age 14, of Galveston with a chunky flounder.

Flounder have always been one of the top choices of a large number of fishermen all along the Gulf Coast. Flounder gigging especially was a popular way to bring good quantities of meat to the table in a short time span.
Prior to the changes, anglers could go out gigging after dark and take a day’s limit of 10 flounder before midnight and afterwards take another day’s limit of 10 as the possession limit was a two-day bag limit.

While mostly flounder giggers were the ones to reap the benefit of the liberal daily limits, pole and line fishermen would at times find concentrations of flounder stacked up around passes and also take advantage of the quantities.
Arguably, the most popular and productive time to fish for flounder, whether by conventional rod and reel or by gigging, was during the annual migration in the fall. During this time the flat fish stack up in huge numbers along the pathways to the Gulf of Mexico and are easy targets.

This is when I first noticed a problem. Prior to the 1990’s, quality flounder would be easy to catch at my favorite spots along the Galveston Ship Channel, but toward the end of the 80’s and early 90’s it became more difficult for the average angler to catch more than just a few flounder. During that era the size was also noticeably smaller as well.
Sportsmen were becoming well aware of the problem and so was the staff at the Texas Parks and Wildlife Department.

As mentioned earlier, in a bold move the TPWD recommended an overhaul of the regulations. The changes, which were not popular with a large number of anglers, included reducing the of anglers, included reducing the daily bag limit from 10 to five and eliminating the two-day possession limit. Flounder gigging would be prohibited during the month of November and at the same time the daily bag limit was further reduced to two per person during November. 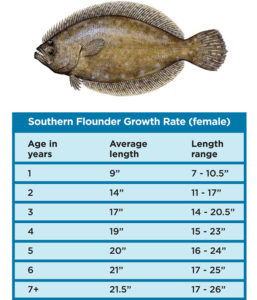 Fortunately for all anglers, the original thought of eliminating flounder fishing all together during November was compromised with the two-fish limits. The only size and bag limit regulation that remained was the 14-inch minimum size. So, after everyone cooled down following such as dramatic change, how is this all turning out?

First, during November, most fishermen, regardless of experience level, are now able to go out and take two flounder. Prior to the changes, there were a lot of empty stringers as the fish were scattered.

Now, let’s discuss what I consider the most noticeable effects. This past winter, there were more flounder caught during the winter months than I can ever recall. Some anglers say it is because we had a warm winter and the fish never migrated. We have had a number of warm winters in the recent past and we did not see this take place.

This spring we are getting reports from both the flounder gigging sportsmen and rod and reel anglers of large numbers of quality flounder in the bays. Occasionally reports coming in to the Galveston Daily News during March and April resembled November reports from the flounder run.

All I can say is that it points to the results of the overhaul in flounder regulations several years ago. Thanks to the Texas Parks and Wildlife Department for making the move!