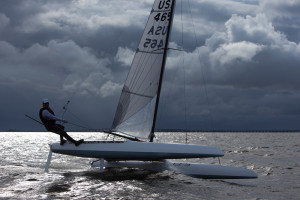 A large group of international A-Class Catamaran sailors came together for a couple of days of great racing on Croatan Sound in Manteo, North Carolina. The racing was very competitive with the championship being won in the last race of the six race series.

Bruce Mahoney, the winner, has been training hard. It showed in his performance, he never finished worse than a third. Bob Webbon, a long time Galveston Bay catamaran sailor, cracked the top ten with a 7th place finish and Martin Hamilton showed the young guys that he can still bring it with 13th in the overall standings.

Two other sailors from the Houston Yacht Club sailing in the championship were Luke McAllum who finished 21st and Kevin Grice who finished 38th out of 45 boats.