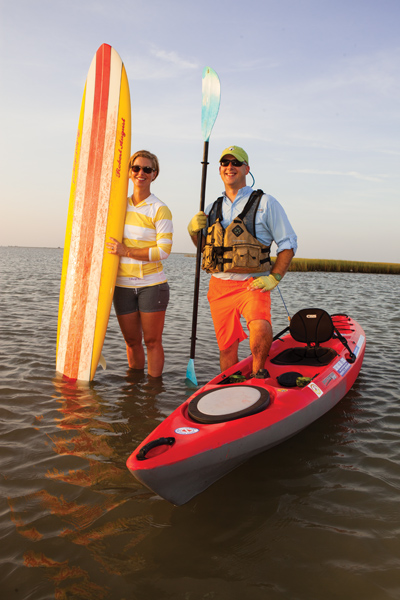 She’s a surfer chick and he’s a coastal kayaker with wanderlust. Together, Callie and Christian Easterly find their peace at Surfside and Christmas Bay on Follets Island just west of Galveston. When they’re not taking to the waves, they’re meandering Christmas Bay’s paddling trail, usually with no agenda except to open the mind.

Though the two grew up less than a mile from each other — she at her dad’s house in the Treasure Island community of San Luis Island, he, roaming the beach and surf of San Luis Pass – Callie and Christian didn’t meet until after she had spent a dozen years in Seattle (“I was surrounded by environmentalists”).  They just happened to hook up in Houston.

“Even though I’d spent most of my years growing up around Surfside and Christmas Bay, I didn’t really appreciate the area until Christian showed it to me,” admits Callie, who is director of development for Katy Prairie Conservancy. “After living in the Pacific Northwest, it looked so flat and boring to me.  Christian has an amazing knowledge of ecosystems, wildlife, and how they’re all connected. That opened my eyes to the beauty that I had grown up around and made me fall in love with the Texas coast, coastal wetlands and of course, prairies.”

For a Call of Duty level designer who advanced quickly in the competitive game world, that knowledge of ecosystems was invaluable to Christian. For years, he designed landscapes in action sequences that immersed gamers in their virtual reality. “If your background comes off as fake,” says Christian, “you won’t continue to engage your audience. The way the sky looks, little ambient sounds, birds flying by….that’s what makes it immersive. One of the reasons why I’ve been put into some of the larger games is because I spent so much time outside.  I had a really good memory bank of references of landscapes that I use.” And, so much of that time outside was paddling Christmas Bay.

Throughout its 4,173 surface acres of water, Christmas Bay has a stable bottom and a consistent four-foot water depth, making it a kind of shallow pan perfect for wade fishing. These same conditions have promoted the growth of over 200 acres of sea grass, making the bay’s sea grass stand one of the largest in Texas. Add to that an unbroken shoreline, stable waters and no primary contact with pollutants, the bay has become ideal as a rookery, marine nursery and everything else that feeds up the biotic chain.

To see all this, you can go out in the open and find your own direction. But, like the virtual games Christian designs, most people enjoy a pre-determined path with options. And, that’s the reason for the paddling trail on Christmas Bay. 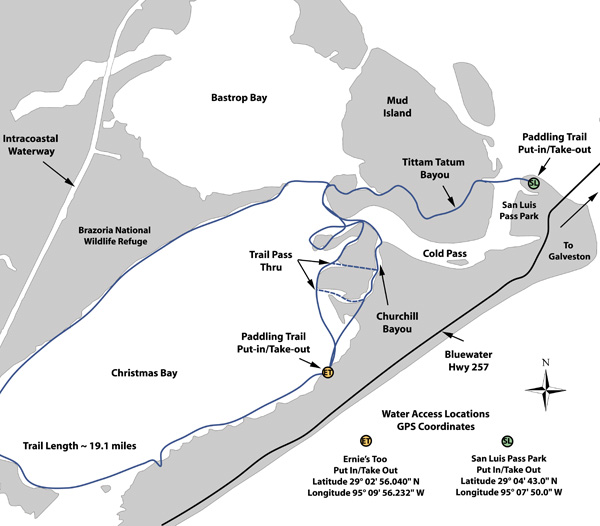 Texas Parks and Wildlife put in the trail shortly after the first one was established at Lighthouse Lakes in 1998.  The concept of paddling trails was new to Texas then, and, like Lighthouse Lakes, the trail at Christmas Bay came in to being because local interest and local stewardship made it happen. Someone was willing to take up the cause and get the markers in the water.

Today, those 29 markers are tied to GPS coordinates that guide boaters in a 19.1-mile loop of the bay.  They have succumbed to years of weathering and forces like Hurricane Ike. It’s time to restore all the signs and some of the posts.

Jim Olive is doing just that with the Christmas Bay Foundation he started in 1999 and with the help of Brazoria County and Eagle Scout candidate Harrison Jones. Olive is crazy for Christmas Bay. It graces the cover of the book he photographed for author Jim Blackburn, The Book of Texas Bays. It is prominently displayed through his photomurals in the Houston Museum of Natural Science’s new permanent exhibit, the Hamman Hall of Coastal Ecology (Gulf Coast Mariner, July/Aug 2015).  It’s the place where Olive retreated for years each weekend, happy in an old fisherman’s shack he owned on a gravel spit in the middle of the bay.

By October, Jim’s foundation and volunteers will complete restoration of the paddle trail, providing anglers and kayakers a well-marked route connecting to Drum Bay, Bastrop Bay, Cold Pass and San Luis Pass. A paddler can do the entire 19.1-mile loop, or go on popular, shorter routes of 3.8 miles and 10.3 miles. 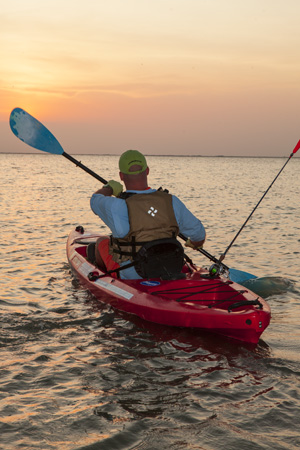 “As a kayaker,” says Christian, “it’s extremely important to have a marked trail.  There can be a mental barrier for people to get out and do it. It’s one thing for people to have the time and money and initiative. But, most people don’t know where to go. Getting in your kayak and going into an expanse of water can be intimidating. Just like the sound on their phone, the same is true with trails.  People like feedback in what they’re doing. It’s nice to see the mile marker and know where you are. It makes it more enjoyable.”

And, for Callie and Christian Easterly, and a lot of other people, there’s no better place. You’ll find them out and about kayaking Christmas Bay.