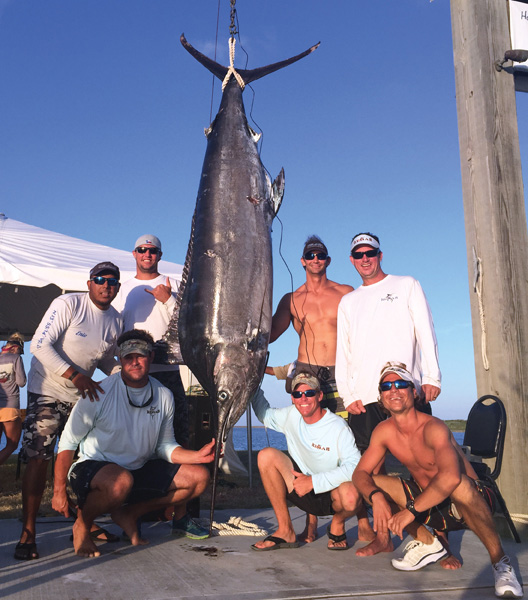 The Lone Star Shootout, formally The Houston Invitational Billfish Tournament, started in Galveston in 2005 as a function of The Houston Big Game Fishing Club. It was moved to Freeport in 2007 and six years ago, again moved to Port O’Connor a location that has proven to successfully attract bigger participation.  The Lone Star Shootout provides serious funds for the Houston Big Game Fishing Club’s charitable programs, supporting college scholarships and other programs relating to fishing, boat safety and Warrior’s Weekend.

To date HBGFC, due in large part to the funds raised at the Shootout and with the support of its members and corporate sponsors, has funded over $150,000 in scholarship money.

The tournament was held July 22-27, following the week of Poco Bueno at Port O’Connor’s Caracol Coastal Development. Most of the boats that fished Poco also participated in the Lone Star Shootout. However, captains and crew members may change, fishing a different boat from the previous tourney.

The tournament concludes with an awards party, remembered and talked about each and every year for great food, entertainment and fellowship. Prizes are awarded for billfish, wahoo, tuna and dolphin.  The Perpetual Champion’s Trophy is the prized possession of each year’s champion and has become one of the most sought after trophies on the Gulf Coast tournament trail.

I found the Lone Star Shootout to be the most fun to attend. It’s smaller than Poco Bueno, but still offers the opportunity to compete against some of the best billfish teams in the U.S. and a chance to win big money. The Shootout has one of the largest payouts of any tournament in the western Gulf with a billfish release format.

The action started off hot on day one and kept going to the last minute of fishing with no less than ten boats reporting at least two marlin releases. After all the boats were in, videos reviewed and paperwork confirmed, the field had caught a record total of 98 billfish! The totals were 35 blue marlin, 30 white marlin and 33 sailfish.

The tournament also featured a $1 million reward for a state record blue marlin! To qualify for this reward, the fish must be certified by the State of Texas and caught according to all tournament rules and any other rules as specified in the $1 million reward rules published and provided to participants prior to the fishing days. Wow! Now we’re talking! 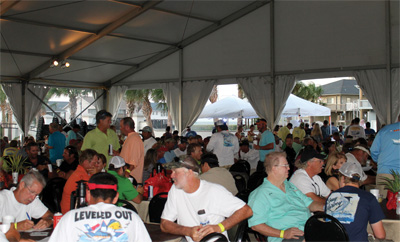 The Shootout was well attended this year.

There was one aspect of the event I found interesting, that I never really understood until a good friend, Mark Phillips explained it. There is the “meat pot” and the “biggest fish pot,” meaning a boat can come in with the biggest fish and not win the big money depending on which side pot they bought into! They win a beautiful trophy and bragging rights but not necessarily money. Betting on the “meat pot” is very expensive but provides opportunity for a nice payout. So it’s kind of, “put your money where your mouth is” so to speak! It can be $40,000 and up depending on across-the-board betting for one boat and all species of tournament fish caught during the tournament.

Congratulations to the Lone Star Shootout Champion team REHAB, who scored 2,450 points with two blue marlin releases, two sailfish releases and weighed a 412.5-pound blue marlin on day one of fishing. REHAB is owned by Jasen Gast and captained by Troy Day.