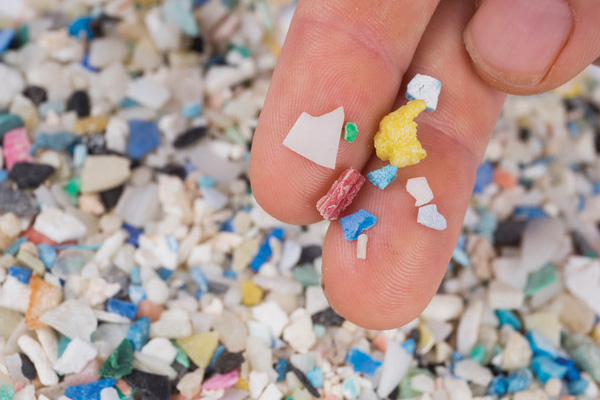 Colorful, tiny and abundant, microplastics enter the marine system as fragments, film, fiber and microbeads and may stay in the ocean for thousands of years. (Photo courtesy University of Florida IFAS Extension, Florida Microplastic Awareness Project)

It may be in the oysters we eat, the water we drink and in the air we breathe.  There’s no magic way of getting rid of it.  And, it seems the Gulf of Mexico’s most pervasive plastic pollutant may be literally on our backs.

For years, scientists have reported on the extent of plastic pollution in far-off places of the world.  But a new effort is revealing just how extensive “plastic soup” is in the Gulf of Mexico.  In the first citizen-scientist effort to document the extent of microplastic pollution in the Gulf of Mexico, volunteers and scientists are finding that these permanent fragments are in nearly every sample they take.

The low-level collection method of dipping one-liter water bottles and collecting sediment in one-gallon bags is also showing that microplastics are just as extensive in urban areas as they are in remote locations of the Gulf. 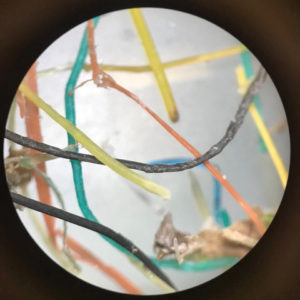 Most microplastics are created when sunlight or wave action breaks down larger pieces of plastic debris into tiny, even microscopic bits.  Colorful and abundant, they enter the marine system as fragments, film, fiber and microbeads.  Lifted in the air, washed from our landfills, or drained from our sinks and washing machines, they end up in our oceans for thousands of years where marine life ingest or adhere to it.

Through a microscope, Theresa Morris has observed baby shells living among microplastics and algae living in Styrofoam.  As a citizen-scientist coordinator based in Galveston with the Turtle Island Restoration Network, she’s one of the scientists involved in creating a more complete picture about the extent of microplastics in the Gulf of Mexico.  “The research is so new, we don’t know how bad it is,” she admits.  Although Morris and volunteers have analyzed just a few samples on Galveston’s beach, she’s convinced that more investigation needs to be done with funding behind it.  Each sample she’s examined contains some form of microplastic.

In the course of her PhD thesis, Caitlin Wessel has seen microplastics in hundreds of samples she’s collected, from the Texas-Mexico border to the Florida Keys.  As she   finishes her doctorate, Wessel works as the Gulf of Mexico Regional Coordinator for NOAA’s Marine Debris Program based in Mobile, Alabama.  Her two years of degree work collecting samples from water, beach sand and coastal shelf material show just how prevalent tiny bits of plastic are, even in the most unlikely locations.

Wessel got curious about microplastics four years ago during a moment offshore Louisiana.  While helping a fellow grad student off Louisiana’s uninhabited Chandeleur Islands, Wessel found herself picking bits of plastic out of seagrass cores.  It’s not what she expected to find 30 miles offshore at the nation’s second oldest National Wildlife Refuge.  “That got me thinking,” Wessel recalls.  “This is supposed to be a pristine habitat, but there’s all this trash out here.” 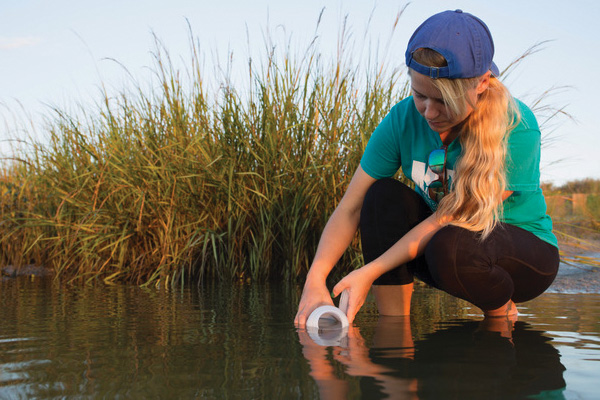 Around that same time, Dr. Maia Patterson McGuire started wondering if microbeads were present in the ecosystem she works in.  Found in toothpaste and exfoliate healthcare products, the tiny beads of plastic rinse off, go down the drain and into the stream chain.  Because they are so tiny, most wastewater treatment facilities pass microbeads.  When McGuire, a University of Florida Marine Biologist, began her citizen-science investigation in 2015, there was no law forbidding the production of microbeads, and not very much was known about their impact on marine life.  With a grant from NOAA, McGuire trained and equipped 16 partner organizations that organized 130 volunteers to collect water samples along the entire coast of Florida.  McGuire was looking for the tiny microbeads.  Instead, she found a different, more prevalent plastic: plasticized fiber, the kind used in synthetic clothing and other products.

“It could be nylon, it could be acrylic, it could be polyester, it could be the plant-based plastics like rayon or a polymer that is made from cellulose, but still a plasticized product,” says McGuire.  Without access to more precise equipment, “we can’t tell just what kind of fiber it is,” she says.  But what she does know is that the fiber is manmade, it’s widespread, and it’s not going away.  “There seems to be an equal-opportunity of finding plastics in water samples regardless of where they are collected.”

Erik Sparks agrees.  At Mississippi State University, he is the collection point for all the samples taken in this citizen-scientist project.  Working with Morris, Wessel, McGuire and other partners along the Gulf Coast, he’s seen the results of hundreds of samples, from Corpus Christi, Texas to the Florida Keys.  In the two years of data reporting, Sparks is finding that “at least 90% of the microplastics have been fibers.  By far, the most abundant microplastics are microfibers that come off of polyester clothing.”

That’s not good news for the Gulf of Mexico where oysters and other bivalves live and ingest the “plastic soup”.  When they filter microplastic-infused water, plastic can stay lodged in bivalve tissue.  No one knows for how long.  Of the oysters that Caitlin Wessel found in Mobile Bay, 25% contained 3 to 5 bits of microplastic.  Beyond its disturbing presence in tissue, microplastics are also known to interfere with the reproductive and offspring performance of oysters.  A study published by the National Academy of Sciences in March 2016 explains that Pacific oysters exposed for two months to polystyrene microspheres (micro-PS) experienced decreases in diameter, oocyte number and sperm velocity.

And, microplastics’ adverse interaction is not limited to oysters.  It appears to affect all levels of aquatic life.  A 2017 report by the Food and Agriculture Organization of the United Nations shows that in lab results dating to 1991, aquatic organisms experienced at least one impact through interaction with microplastics.   The impacts range up the aquatic food chain from adherence in algae to liver toxicity in fish.

That kind of exposure may affect humans.  “As plastics break down, they leach toxins that are very bad for you,” says Morris, “Like PBCs.  They’re carcinogenic.  They cause mutations in fetuses.  They also cause a lot of physiological complications in your endocrine system.  Fish eat them, and so, when you eat fish,” she explains, “you are eating meat that has had these plastic toxins leached into the meat.  The research is so new; we don’t know if this is what is causing people to come down with cancer.”

Given the recent spotlight on microplastics in the media, there’s still no ceasing the trend of more people on earth.  So, the demand for plastic will be there where natural resources are spare.  Which means, microplastics will be in the Gulf of Mexico a long, long time.  “There’s no feasible way to remove microplastics from the water without basically removing every piece of life from the water,” says McGuire.  And, if that were to happen, we’d no longer have an ocean.

McGuire used her citizen-scientist investigation to form the Florida Microplastic Awareness Project.  Each volunteer takes a pledge. You can, too.