Interview with Capt. Rex Hoyt of Texas Rattler™ in Rockport 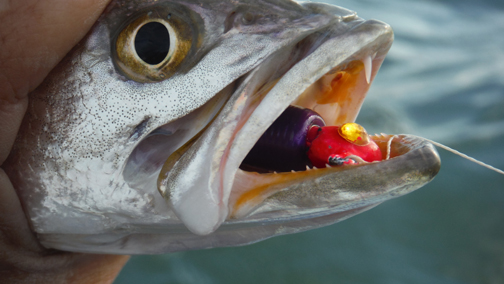 We caught up with Capt. Rex Hoyt of Texas Rattler™ in Rockport to talk about his “world’s finest” rattling jigheads, spoons and soft plastics. 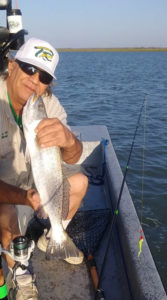 Where are you from?
I was born in Katy, Texas in 1955 and graduated from Katy High School in 1974 where I played football, basketball and baseball. I was All District offensive and defensive in football and baseball.

My love of sports and a strong work ethic helped me be elected in football to the All Greater Houston Team as a DB for 3 years. In baseball, I still hold the season records for RBI and Home Runs at Katy High School with a wood bat set in 1973 – 4 HR, 25 RBI in 18 games.

Tell us about your journey that led to the design and success of the Rockport Rattler® and now the Texas Rattler™.
My strong desire to help others catch fish and enjoy the bounty that mother nature has to offer has set the foundation of my fishing journey. These two things set in motion my invention of the rattling jig-head invention back in 2003.

First, I wanted a lure that would help my young kids catch fish off the pier without me having to buy live shrimp all the time. With a pier at my condo, they could fish every day or night, and that got expensive.

Second, as a guide depending on bait stands for live bait to catch fish and competing with other guides at 5 a.m. in the morning for live croaker or shrimp got old real fast. So I set out to invent a lure that could contend with live shrimp, croaker or fin fish. Fish have ears and can hear just like you. They are called otoliths. And, just like you, if they hear a familiar sound they will come check it out – just like you do when you hear a knock on your door.

Rattles in corks and topwater lures were proven to be effective at producing fish over the years. The rattling cork helped me make a living with live shrimp on guided trips – that rattle sound worked! They got fish to come to the surface or that area and eat the shrimp suspended under the rattling cork.

The result was that the rattling jig-head going subsurface at various depths to the game fishes actual ambush points and sanctuaries could actually compete with live bait. 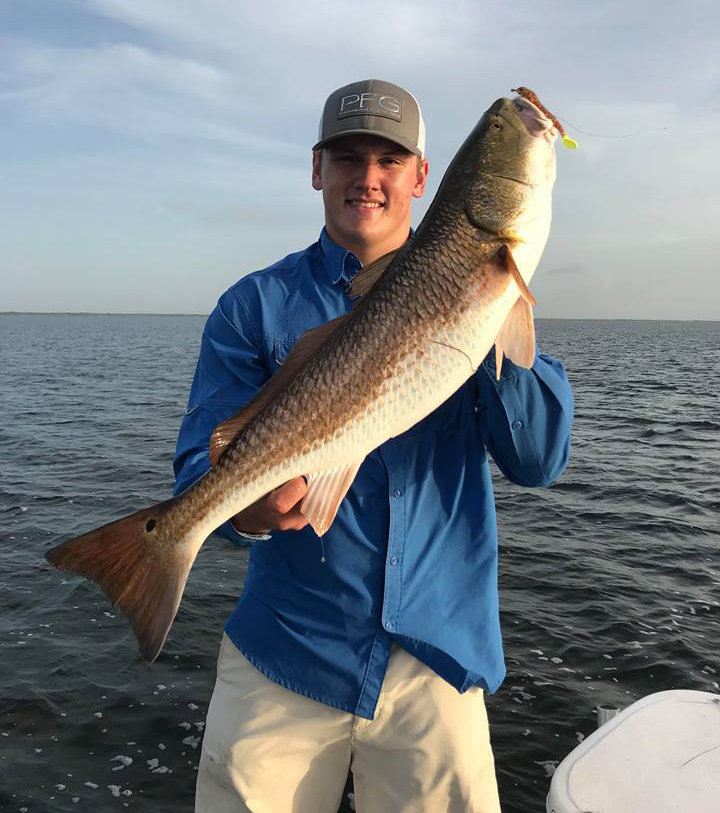 The rattling jig-head put in the hands of novice anglers had them out-catching their friends using a silent jig-head by a solid 5-1 ratio or better when fishing in the same boat or wade/kayak fishing the same area. That ratio has proven itself to be a consistent ratio over the last 15 years from actual reports from recreational and tournament anglers.

In early 2003 I started using rattling jigs on my fishing charters right alongside the live bait my customers were using and the rattling jig-heads I invented could not only compete with the live shrimp or live croaker, but it consistently caught the bigger fish. I put the Rockport Rattler® on the market in May of 2003 and anglers all along the Texas gulf coast that started using them were amazed at the ability of this rattling jig-head to improve their fishing catch – both in numbers and size.

In 2009 I put the Quick-Lock on the Rockport Rattler® because the original did not have a locking device on it. It depended on the expansion and torque from the soft plastic expanding over the rattle chamber to hold the soft plastic on.

Some soft plastics slipped when casting and retrieving on the original, but anglers were catching more fish so they put up with that nuisance and kept using them.

The locking device has always been a problem on jig-heads and the rattling jig-head was no exception. So I invented the QuickLock in 2009 to solve the slipping problem.

The Quick-Lock was made adjustable from a stainless steel wire prong. The QuickLock SS wire would hold on the soft plastic but it sliced it from a fish bite so I made it where an angler could adjust it to get another grip. By getting another grip on their soft plastic an angler’s soft plastic would last longer. 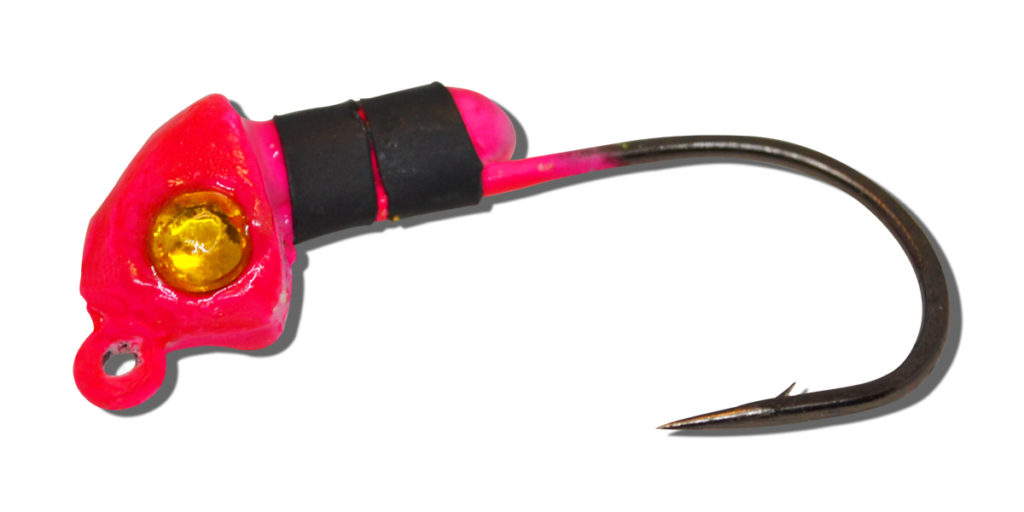 By making the QuickLock “adjustable”, I was the first person to put an “adjustable locking device” on a jig-head and that is what earned me the US Patent US 7,614,178 B2. I sold the Rockport Rattler® original and QuickLock in 2013.

Since that time, the jobs were moved from Rockport, Texas overseas and the new owners are not making the QuickLock “adjustable” like my US Patent is designed and as a consequence it slices an anglers lure on the 1st fish bite.

I became frustrated with going through so many expensive soft plastics on the Rockport Rattler® on the now non-adjustable QuickLock not being made correctly – like anglers all across the USA. So I decided that since my 3 year non-compete agreement was over with, it was time to invent a new locking device for a rattling jig-head and put it on the market.

Right about that time, Hurricane Harvey made landfall at Rockport and left a wake of destruction and destroyed over 65% of the businesses. Of that number, only 1/3 of the businesses have rebuilt at this time.

So I decided I would come out of retirement and create a better rattling jig-head while creating some jobs for this community so the citizens can rebuild and the can city heal itself.

My new invention, the “universal” U-LOCK™, which I have put on my rattling jig-head and named the TEXAS RATTLER™ is amazing the way it “universally locks” on a soft plastic.

What makes Texas Rattler™ products unique from others?
TEXAS RATTLER™ jigs: The U-LOCK™ uses the power of friction created by rubber to hold on the rubber soft plastics. The rubber housing of the U-LOCK™ vs. rubber of the soft plastic increases the friction by 250%. Secondly, as all experienced anglers know- you leave two different colored soft plastics in your tackle box together they will exchange colors, you leave them in the sun and they will melt into each other – there is a chemical reaction going on. The U-LOCK™ does the same thing. A soft plastic’s chemicals in the lure creates a tackiness when put on the U-LOCK™ that provides an extra gripping power.

TEXAS WALKING SHRIMP™: It looks like a live shrimp and has legs that swim or “walk” through the water just like a live shrimp does, especially when used under a popping cork. It can be rigged a variety of ways on hooks or jig-heads depending on an angler’s preference or what is needed at the time.

TEXAS RATTLER™ 3D Spoons: It is the only spoon on the market today that rattles, has eyes on both sides of the spoon and uses a 3D holographic fluorescent glitter on both sides to create a realistic looking belly of a fin fish. All fin fish have a white or light colored belly that reflects UV rays from the sun. The TEXAS RATTLER™ 3D Rattling Spoon is the only spoon on the market that has these advantages for anglers to fish with.

What is your favorite Texas Rattler™ product and color to use while fishing?
My favorite TEXAS RATTLER™ jig color to throw is the 1/8 oz. chartreuse/redeye rigged with a 5” plum/chartreuse soft plastic. My favorite way to fish is with a TEXAS WALKING SHRIMP™ on a TEXAS RATTLER™ Z-MAX rattling weightless hook under a popping cork. They both consistently catch the Texas Slam for me year round.

Do you have a favorite fishing moment?
I was on a fishing charter with a client and his 10 and 8 year old sons in March of 2003. Drift fishing using live shrimp under a popping cork in 2–3 foot of water I was casting for the kids and they had reeled in several trout 16”–18” trout pretty quick and Dad was happy.

When that count grew to 6–7 trout around the same size and Dad hadn’t caught any, I saw his frustration and I knew I had to do something to help him out. He wasn’t popping his cork or keeping the slack up and was missing his fish bites. I had a rattling jig-head that I hadn’t put on the market yet on my personal rod n’ reel and knew if he threw it, he’d have to at least work it and not just let it sit. So I asked him to use it. Second cast with my rattling jig-head prototype he hooks into a 26” redfish, couple trips around the boat and I net it for him.

Now he jumps back on the bow of my 24’ Carolina Skiff with a smile, some enthusiasm and casts back out. About 5 casts later he hooks into a 27” redfish. Bigger fish, wider girth, longer fight. I finally net it and put it the box and he pounds the butt of my rod n’ reel on the deck and says, “I ain’t ever using live bait again.” That was the day I knew the rattling jig-head should be in every tackle box in the USA. 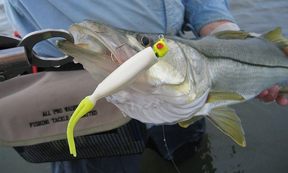 What’s your favorite place that you have fished?
Cedar Bayou Fish Pass. It is a wade angler’s paradise.

Besides fishing, what else are you passionate about?
I am very passionate about creating jobs for the community of Rockport, not just so it can rebuild after the destruction caused by Hurricane Harvey, but to provide jobs for the future for its citizens to come home to after the next hurricane hits. As our lures are stocked nationwide over the coming years our mission is to create a work force of 10-15 people.