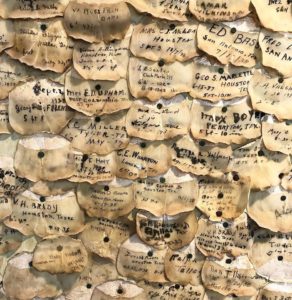 A portion of the 7,000 scales hung up on the walls in the lobby of The Tarpon Inn. Photo: Kelly Groce

Port Aransas, Texas was once upon a time called Tarpon, Texas because of the large numbers of Tarpon being caught in its surrounding waters. In the early 1900’s, the word about the abundance of Tarpon in the area began to spread and fisherman from all over the country began making their way south to see for themselves.

United States President, Franklin D. Roosevelt was one of these fisherman. Prior to WWII in 1937, FDR came to Port Aransas on a mission to catch a big Texas tarpon. FDR and his son Elliott fished with the famous fishing guide, Barney Farley. Barney Farley was a guide and a brother to Fred Farley who designed Farley Boats. FDR caught a 4’, 80 lb. tarpon that day (pictured right) and apparently had a blast while doing so.

If you caught a tarpon back then, the tradition was to sign and date one of its scales. These scales were then hung on the wall inside of the Tarpon Inn. FDR continued with this custom and added his scale to the wall. 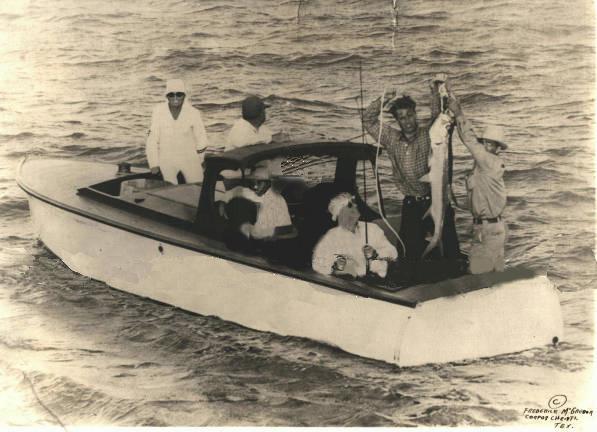 President Roosevelt catching a tarpon on a Farley boat off the coast of Port Aransas in 1937 with famous fishing guide, Barney Farley. Photo: Doc McGregor

The Tarpon Inn was built in 1886 with surplus lumber from the Civil War barracks. The building became a hotel after it was first housed by men working on the south jetty in Port Aransas. It’s been a popular place for fisherman and visitors to stay ever since. 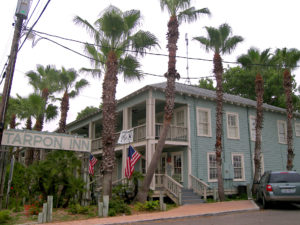 The walls in the lobby of the Tarpon Inn are covered in over 7,000 tarpon scales (a portion pictured above). Each scale has the signature and hometown of the angler, along with the date, size and weight of their catch. It is truly remarkable to see this sort of history on the walls. There are scales from all over the country, even the world. The oldest scale dates back to the 1890’s. The most famous scale in the collection is the one signed by Franklin D. Roosevelt himself.

The Tarpon Inn is a beautiful and historic place to stay if you plan on visiting Port Aransas. You can walk to nearby restaurants and bars, and watch large tankers and fishing boats go by from your rocking chair on the long, sea breezy porch. The beach and jetty is also just a short drive away. The rooms are very comfortable, but do not have televisions or telephones that way you can truly relax on island time. 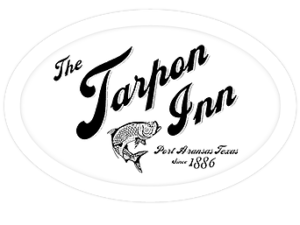