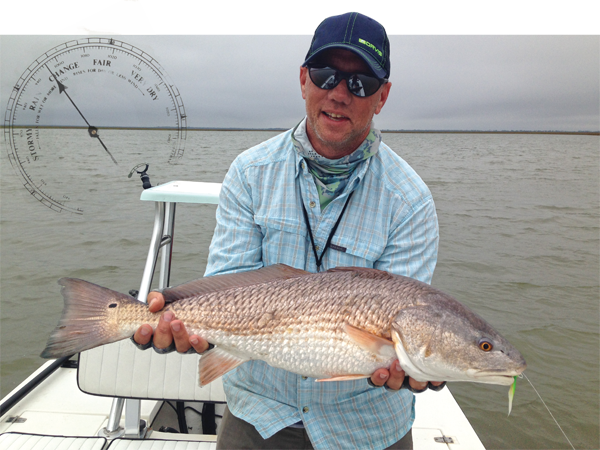 Every day in the life of saltwater angling, we feel pressure. Whether we are recreational or professional, fishing for fun or fishing for money; lets face it, trying to catch fish consistently is no easy task when fishing with rod and reel, and even more so when you only fish with artificials. The pressure that we feel as anglers, however, is nothing compared to the pressure that the fish feel. At this point you may conclude or assume that I am referring to the pressure on a particular fish or fishery. As important and impactful as that aspect may be, that is not the pressure that I’m talking about.

The pressure, or more precisely, the barometric pressure, plays a huge role in fish feeding and general activity levels day in and day out. I can’t personally recall meeting anyone that could truly “feel” barometric pressure changes or direction of movement. Animals, on the other hand have no problem at all noticing even small changes in barometric pressure, and these changes and trends in pressure have an impact on fishing. I’m not going to tell you that there is a perfect science to this, but over the years, I have certainly watched some distinct trends become evident and often reliable.

Planning for barometric changes isn’t something that we can always do, but some situations are easy to understand and plan around. There are some obvious and noticeable times when even though we probably can’t feel the change in barometric pressure, we can feel or see the changes that coincide with it. Clouds are a great indicator, along with rapid changes in temperature. It’s well known that as winter storms approach the Texas Gulf Coast, pressure trends will be downward, and as the front passes the coast that a rapid rise in pressure will follow. We can plan around these fronts and we can often fish around summertime passing thunderstorms to take advantage of rapid pressure changes.

Over my 15-plus-year career of both guiding and tournament fishing, I have often tried to track and make notes about conditions, and how they impact, or at least appear to impact fishing. I will say without hesitation, pressure seems to have a greater impact on the feeding, or lack of feeding, of speckled trout more so than redfish. Keeping in mind that there are no hard and fast rules that apply in every situation, there are some noticeable trends and patterns that I have found and recorded over the years. The bites and other sources of information have helped lead me to these conclusions. 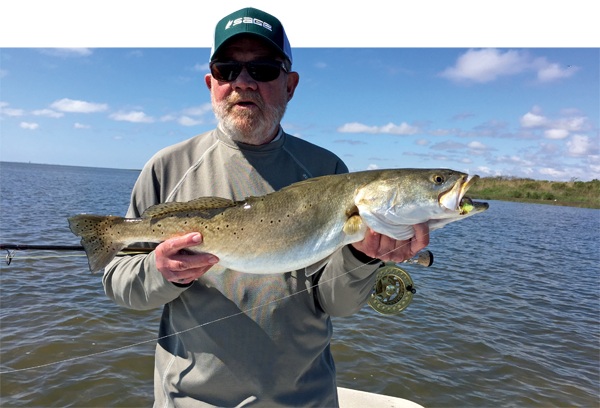 Randy Cameron with a 28.5” trout taken on the fly.

In the middle of a very difficult day of tournament trout fishing in 2010, sometime around 1 p.m., the fish turned on in a very nasty way. I think that up to that point, my teammate and I had only had two bites and had yet to land a fish. It was a cold day in February, and a strong cold front had passed that morning before sunrise. We were battling a stout Northwest wind and a screaming upward trend in pressure. There were a couple of conditional changes that all occurred in a short period of time that seemed to put some short term urgency in the trout. A tide change and a slight decrease in wind speed, in the middle of a rapidly climbing pressure trend, caused a short period where the pressure dropped before continuing on its upward movement. What made this memorable, or even noteworthy was that in the 35-45 minutes that the trout fed, I landed all three of our weigh fish for the day, including our big fish at 7.58 pounds. The sad part was that of seven bites, I was only able to land three and at least two of the four I lost were considerably larger than the biggest that made the trip to weigh scales.

We have all heard that high pressure days are bad for trout fishing. This example, along with many others that showed a similar pattern, have led me to believe that it’s not so much whether pressure is high or low, but more how stable the trend is. Fish seem to bite on changing pressure. It seems that as I have monitored pressure and other conditions in my fishing, stable trends in pressure don’t seem to generate aggressive feeding behavior. So, if pressure is stable, or moving at a steady rate up or down, this creates a similar situation where fish seem to be less aggressive. When the steady or stable trend is broken by sudden movement of pressure in either direction, fish seem to feel a sense of urgency to feed aggressively.

Another of the shining examples that fish have shown me over the years about how barometric pressure can trigger aggressive feeding has to do with a large marsh lake in Galveston Bay that I have fished for many years. In the Summer, the lake is loaded with redfish and trout but they don’t often gang up and feed very well during daylight. One of the most interesting trends in the lake in summer is that if a summer thunderstorm passes over the lake, especially early in the day, the redfish and trout in the lake would gather and feed very aggressively for a brief period. These are not just average fish, but exceptional fish that aren’t often caught during the summer months in this location. Numberous 20-to-25-inch trout and 26-to-29-inch reds would gang up and chase shrimp and mullet. The first boat in the lake after the storm would reap the benefits, but by the time a second or third boat got there, the action would come to a halt. The rapid drop and returning climb of pressure put the fish in a frenzy, but it was always short lived.

It may not be easy to plan fishing around pressure changes all the time, but tracking changes during your fishing days can lead you to some interesting finds and improved catches. Though you could probably buy a small portable barometer, its much easier to just use the internet. NOAA, on their “Tidesonline” website, has buoy stations all around the Gulf of Mexico. Not all of the buoys have full data tracking but there are enough that you can get the general picture of what has gone, or is going on in your area. Use this tool to makes notes about things that have occurred during the course of your fishing day when you get home. While on the water, you need only to make mental notes of the times and location of better feeding activity, then compare those times to the changes in conditions when you get home to locate the correlations. In time, you will inevitably uncover some interesting trends that will hopefully improve your future fishing.