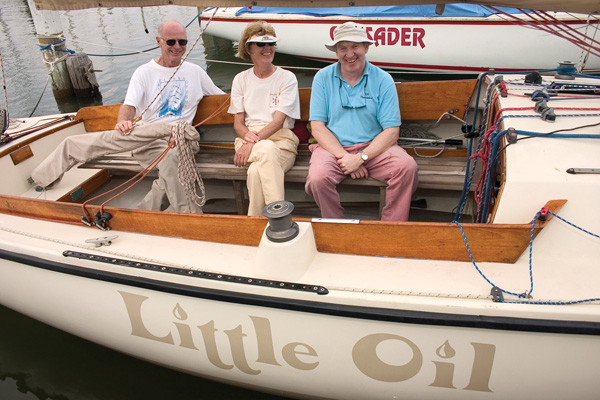 Where were you born, and what was your childhood like?

I was born near Somerset, Ohio a small town in the foothills of the Appalachian Mountains. I was one of nine siblings that provided the work force for the operation on the Sniders Family Dairy. Being one of the youngest siblings, I was not involved in the major jobs on the farm, but was kept busy with appropriate farm activity. The farm was sold when I was eight years old so I had a major change in my life when we moved to Celina, Ohio.

The home in Celina was very close to the water front on Grand Lake. The lake originally was built to provide a water supply for the Miami/Erie canal and was five miles wide and ten miles long.

My father owned a small boat with a 3.5 HP Scott Atwater motor for fishing. Since my father was now traveling the State of Ohio selling dairy equipment, I had access to the boat and spent a lot of time on the water (not fishing). This evolved into a love of the water

How did you get started racing sailboats on Galveston Bay?

Racing Sailboats did not enter my life until I graduated from College. I went to work in New Jersey at an EXXON refinery. In the next year, my bride to be graduated from College and we were married. She worked for UNION CARBIDE in New York. One of our early trips was to Cape Cod. To entertain my new wife (Kay) I rented a sailboat and we had a pleasant sail. She was a quick learner and liked the activity.

A month after we were married, the EXXON refinery where I worked had a major strike by the union workers. The strike lasted about a hundred days. The first thirty days I spent in the refinery running one of the units. The fallout of this activity resulted in a bonus that we had to spend. We wanted to join a Golf Country Club but that was too expensive and public courses took too long to play. So we bought a sailboat and raced it at the Nyack Boat Club on the Hudson River.

The sailboat was a Lightning and the prior owner volunteered to teach how to sail the boat. He was a racer and since there was a race the day he took us out, we entered it and finished mid fleet. We thought it was so easy and if we could get another engineer from the refinery and with a three engineer crew, we would be winning races. As it worked out the only race we won was four years later. The race was at the end of the season that year and it was only open to the fleet members that had not won a race that year. It was a long four years, but we learned a lot!

After the “win” we had to sell the Lightning because of a transfer to Houston. The second day in my office a gentleman walked in and identified himself as Hank Arnold. He did not want to talk about business. He was a sailor, a member of Houston Yacht Club and raced his Ensign. During the next two weeks, Hank became the sponsor on our HYC application and we bought an Ensign. This was in 1967 and we have actively raced it since then.

What is some good advice about starting in big fleets?

One of the things we had to learn early in our racing career was how to start in large fleets. Both the Lightning Fleet and the Ensign Fleet routinely had 15-20 boats on the starting line. We have found that a lot of homework is required on the water before the start of the race. Information that is helpful to getting a good start include, the favored end of the line, the time it takes to travel the length of the line, which tack is likely to be favored at the start, the frequency of wind shifts and which end of the line you want to start at. The Lightning and the Ensign that we raced are not dinghies. Unlike dinghies that can sit on the line and trim in the sails at the gun and accelerate quickly, the Ensign at 3000 pounds does not do that. Since it is important to get to the starting line close hauled and at full speed it is important to know how far in various wind conditions that you need to be from the starting so that when you harden up, you hit the line at the starting gun.

Ensign National Events with 40 plus boats on the line required a starting line that is in excess of a thousand feet long. It requires more planning and picking your “spot” to start well and be there at the gun. The favored end is usually crowded so you have to decide whether to “duke” it out there or go for a start in a “hole.” I have had success and failures in both situations. In the failures, it is important to get to clean air as soon as possible and get in phase with the wind shifts and current at those sites that have significant current. It is important to find a clear lane to sail in after the start to minimize the number of tacks. This is hard to do since you don’t know when somebody is going to tack and give you dirty air. Sometimes if the penalty to tack and get out of dirty is large if may be best to ride out the dirty air. Lots of judgment decisions are required on the race course!

Since we are now racing in a much smaller fleet, the starting line is generally only 30 seconds long. Position in the last two minutes of the starting sequence is critical. Based on the other boats position, you have to evaluate who is going to be late, early, and position yourself to take advantage of the information obtained on the water prior to the start.

What do you look for in a good crew?

The most important element in racing an Ensign is having a good crew. The best situation is having a good crew that is compatible and can race with you all the time. It is most important that the crew really enjoys being on the water. The rest of the stuff falls into place. The ability to recognize headers and lifts on the weather leg, agility and strength to hike, understanding sail trim, and stamina to make it around the course all comes with experience. This experience can be gained on other boats, but is easily transferred to the Ensign.

As with all boats requiring crew, the crew expects certain things from the skipper. They need to know what the next move is going to be so that they can be in position to carry it out, especially a warning that you are about to tack. A smooth tack requires timely action by the crew and skipper to maintain boat speed. This is especially important if the wind is fresh since it takes time to get off the rail on one side and be in position on the rail of the other side. Another situation that requires lead time is when you are approaching the weather mark and you need to move the spinnaker from one side to the other side before you reach the weather mark. It helps if the skipper keeps a dialog going regarding all upcoming action on the boat. For new crew this is necessary and is also educational. The more they learn about you and the boat, the faster you will go! One thing that is not conducive to team work (and boat speed) is an abrasive skipper

I had the pleasant experience of racing with the same crew for 35 plus years. It included Frank and Sandy Kelley (we purchased their Ensign in 1967) and my wife (Kay). Frank and Sandy seemed like nice people, and since we did not know anybody else in Houston, we invited them to crew for us. Five years later, the Kelley’s bought a Catalina 25 and later switched to a Morgan 27. As long as the Kelley’s owned a boat we crewed for them in GBCA races and they crewed for us on the Ensign. This was intense racing for the four of us, but it was also great training for the crew. We all learned all the positions on the boats and became a stronger team. Several people made the comment that when Frank injured himself, I felt it!! It was a wonderful experience to know and race with the Kelley’s. They crewed for us in most of the National and Regional events that we attended, including three of our four National Championships. It was a challenge when we had to train new crew. We had not talked about the crew functions for 25 plus years and it was hard to figure out what the Kelley’s did. Whatever is was, it was good!!

Tell us about racing with your wife.

Racing with my wife Kay is one of delights of my life. Over time, she became the “crew steward” (protecting the crew’s union rights), still is a great crew and loves to sail and race. She keeps the boat gear organized during the race, can jibe the pole if necessary, trim the jibe and make on the spot repairs if needed and points out items in need of repair. If there is rigging problem during the race she can isolate the cause and correct it without the Skipper needing to take his attention off sailing the boat. Once in a while we have a disagreement on the boat, but have learned it is best to wait until the next day to resolve the issue. This is working better and better as the years go on. My memory is getting worse with time so most of the time I don’t remember the problem. 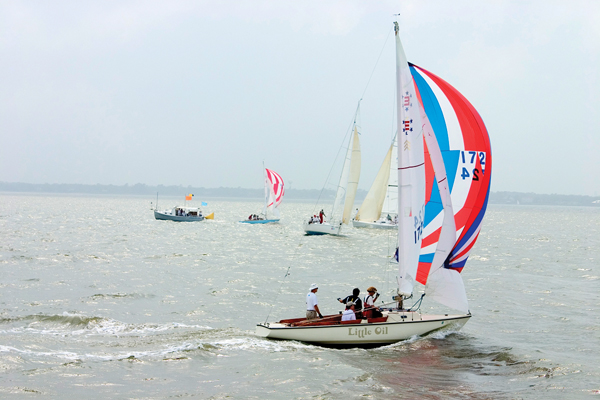 Your boat is named Little Oil, how did you come up with that name?

We purchased a new Ensign in 1980. It became a problem because there were so many naming options. Our prior boat was named Striker II and the origin of this name was because the boat was bought with a bonus from a union strike at the Exxon Refinery where I was employed. We ended up using a link to our life as a basis for the name. In 1980, I moved from a large oil company to a small oil trading company. Kay still worked with Exxon so we played with the idea of naming Big Oil on one side and Little Oil on the other side. Little Oil finally won since the Ensign is a “little” boat. I am happy to report that our prior Ensign (517) is still active and competitive when raced!