Resolutions and a New Year

Joe Holecek with a bull red.

“A resolution is a plan of something to be done.”

Every year, people make resolutions, but rarely follow through with them. Without a plan, resolutions fail miserably. Most result in failure.

I, myself, make resolutions every New Year. Rarely, do I follow through with them. This year I plan to resolve this issue. How many of us do the same; make resolutions and not follow through with them? What I hear from a lot of folks I encounter is “I really need to use my boat and fish more this year.” If you fall into this category, January and February is the best time to resolve this resolution.

The weather this time of year is “iffy” to say the least. This makes it the right time, to get your boat and fishing gear in order. Do not hesitate getting that boat into a shop for repairs and maintenance. Before doing so, take all items out of your boat. It is amazing how much ‘stuff’ you can collect during a fishing season. Discard all that is no longer serviceable. Don’t overlook your rods, reels and tackle. Get your reels serviced, rod eyes replaced, and inventory your tackle. I would also recommend having preventive maintenance performed on the boat trailer. Being organized and ready makes that first spring fishing/boating trip enjoyable and not a chore.

If you’re new to boating and fishing, do not miss the annual Boat, Sport and Travel Show at Reliant Center, January 3-12, 2020. On display will be the latest boats, boating accessories, fishing tackle, marinas and fishing charters. I will be at the show everyday in the Eagle Point Fishing Camp/Waterman’s Harbor booth. Stop by and lets chat!

On the fishing front, catches of trout, redfish, black drum and sheepshead have been good in Galveston Bay. Timing is everything this time of year. Warming periods between fronts is the key. For those who like to pursue flounder, TPWD held scoping meetings in December about further restrictions on these fish. If any change is recommended the vote will take place in Austin, during the commissioner’s hearing in March. I suggest you monitor the web for any new proposals and public comment meeting the next couple months.

I am looking forward to this coming year both spiritually and personally. I have a “plan” in place to keep my New Year’s resolutions. As a new Christian, my walk with Christ will be number No. 1 on my list, along with my upcoming marriage later in the year. I will continue to fish, which is my passion, and God willing, introduce new anglers to fishing. Lastly, I can’t say enough about the great people that keep the magazine in print. I am very blessed to write for them. Until the next issue, ‘tight lines’ and may God Bless you this coming year.

Galveston Bay: 2018 Past and Present 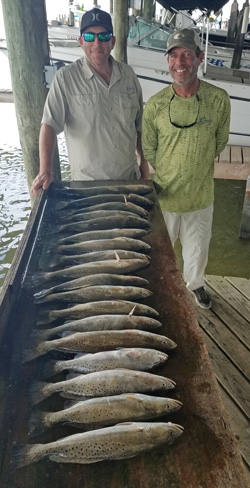 The Holiday season is here. Another year has come and gone and folks will begin making their plans for the holidays. If you enjoy the outdoors, fishing or hunting, this is prime time! Hunting begins in earnest and fishing can be the best of the year!

During March and April, we did experience some late season fronts. As the weather stabilized, spring-like weather arose, as did the water temperatures. Good catches of trout came from Lower and East Galveston bay. Everything was shaping up for an excellent year of fishing.

May and June arrived and the weather took a turn for the best. Fishing in East Bay got even better, with excellent catches of speckled trout coming from the reefs. During the latter part of May, trout made their move to the middle areas of the bay. The trout catches increased around Eagle Point. In June, the wells located off of Eagle Point produced excellent catches of trout and redfish.

July and August blew in along with inconsistent winds. On any given day, the wind would blow from two or three different directions and velocity. This curtailed what was excellent trout fishing. Those who concentrated their effort on other species, were rewarded. I myself went after redfish and the action was outstanding! Winds finally settled in late August, and the trout catches rebounded, along with great catches of sand/gulf trout and drum.

This bring us to September and October. In my last article, I stated these two months were the “transition period” for Galveston Bay. Indeed it was! During the first week of September, everything was good and fish were falling into their seasonal change. Then, the Galveston area experienced rain, almost, if not every day in September. We did not have a major flush of freshwater into our bay, but in some locations, 100 year old rainfall totals were broken for the month. 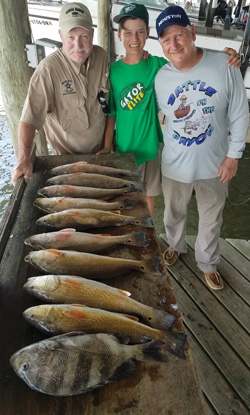 In October, Florida was hit with a catastrophic hurricane, which caused our tide levels to rise 2 feet above normal. The high tides have curtailed catches. Look for tide levels and fishing to return to a normal fall pattern as more cold fronts occur.

Finally, this bring us to November and December; what I refer to as the “Holiday Season.” There is no better time for a true sportsman in Texas. Fishing between the fronts can produce some of the best catches of the year, and hunting season is wide open. On the fishing scene, the annual flounder run will be in full swing. These fish will be making their migration to the Gulf, and lots of anglers will target just these fish for their well known table fare! Trout and redfish will be plentiful in the upper end of our bay system. I will be fishing between the fronts and preparing for the annual Houston Boat Show starting Jan. 4, 2019.

Eagle Point Fishing Camp will continue to hold live bait. They can be reached at 281-339-1131 for updates on bait and fishing. Until next year, may God Bless all of you during this great time of year.