Do we see the change from summer to fall? I see the signs; school begins, traffic increases, daylight is shorter and football season starts. Do fish and wildlife sense the change? To those who are observant, the movement and patterns are evident. Also, this is the time of the year that new fishing and boating regulations are enforced.

A major change to boating is the use and attachment of the motor cut off switch to operators of motor boats 26 feet and less. Saltwater fishing regulation changes are the statewide enforcement of the daily bag limit of speckled trout to 5 fish per person per day. Shark fisherman will be required to use non-stainless steel, non-offset circle hooks while in state waters. The size limit for Cobia (Ling) will increase to 40 inches. Fishing licenses will need to be renewed, so make sure you are legal.

Fish will begin to change their pattern, very subtlely in September and noticeable in October. In September, their slight movement will be directly related to the decrease in daylight hours. Fish will move slightly toward shallower water as it begins to cool from less sunlight. With each passing cool front, which usually begins the middle of September, speckled trout, redfish and flounder will seek the shorelines and move towards the northern reaches of the bay. This movement is a direct reaction to baitfish and shrimp migrating from the marsh to the open bay. Remember fish follow the food chain. They go where they can eat!

Anglers will be able to pursue these fish on a variety of soft plastic baits and of course, live natural baits. For flounder, live mudfish and finger mullet will be the go to baits. Although finger mullet can be scarce, Eagle Point will have some of the best mudfish available anywhere on the Texas coast. Trout and redfish will be caught on live shrimp fished underneath a popping cork. Also for those anglers who enjoy throwing artificial lures, a variety of soft plastics will do well. Anglers searching for something big should look no further than the Galveston Jetties. The annual bull redfish run will begin in September and really heat up in October. Tarpon fisherman will have a chance to get catch the largest of these creatures along the Galveston beachfront.

You can call Eagle Point Fishing Camp at 281-339-1131 to check on their bait supply. Enjoy this time of year, fishing can be fantastic!

Justin Clinfton caught a mixed bag fishing with his brother and two daughters.

I ended my last article with me taking a trip to the warm waters and sunny beaches of Central America. It was perfect timing, as a strong cold front hit the Upper Texas Coast on the day of my departure. The forecast called for freezing temperatures, which never materialized. That was a blessing, for many states experienced their coldest temperatures in years. It is now the first week of February, as I write this article. It has been a typical winter so far on the Upper Coast; rain, wind, some cold days and lots of fog! Hopefully, we dodge any severe freezes. The old Groundhog predicts a early spring. But he has only been right around 38% of the time, about as good as our weather forecaster’s on the local news! So, what can we expect for March and April?

Starting the first week of March is the annual “Fishing Show” at the George R. Brown Convention Center in Houston. The show runs from March 6 – 10. There will be everything about fishing under one roof; tackle, new products for the angler, boats, fishing charters and daily seminars. I will be at The Eagle Point Fishing Camp booth throughout the show. On Sunday March 10 around noon, I will be conducting a seminar on “Everything Galveston Bay, Where and When.” Come out to “ The Fishing Show,” you will not be disappointed!

Previously, some of you might have read about Texas Parks and Wildlife Department (TPWD) proposing to reduce the bag limit of speckled trout along the Upper Coast. The five fish limit for trout started along the Lower Coast first and was extended to the Middle Coast a few years ago. During the TPWD commissioner’s meeting this past January, they agreed to proceed with voting on regulation changes during the next meeting. They seek to extend the daily five fish trout limit statewide. The vote for this regulation and some others will take place in Austin during the next commissioner’s meeting  March 19-20. You will be allowed to address the commissioners during the meeting on March 20.

TPWD will be holding statewide hearings about the proposed regulation changes. I advise everyone to attend one of these hearings. You will be given a chance to verbally speak and share your opinion about the proposed regulations. You may also write or email TPWD. One can keep abreast of local hearing dates and times by watching The Galveston Bay Fishing Show on Facebook and Youtube, live from Eagle Point Fishing Camp every Thursday.

Now for the fishing this March and April, I will personally concentrate my effort in East Galveston Bay. Last year the fishing was very good when the weather cooperated. Along the granite rocks known as the Galveston jetties, the Black Drum run will be in full force. Sheepshead, redfish and speckled trout will also be there for the taking. If the wind blows from the South-Southwest, fishing along the base of the Dike up to Moses Lake should produce speckled trout along with black drum. Also, don’t over look the shorelines around Eagle Point. Sometimes the fishing can be really good in spring around the pilings on those shorelines. Just a reminder for those that launch under the Kemah Bridge; those ramps have been closed. Eagle Point Fishing Camp is not far down the road and has a nice three lane ramp and is a full service fishing facility with live bait. 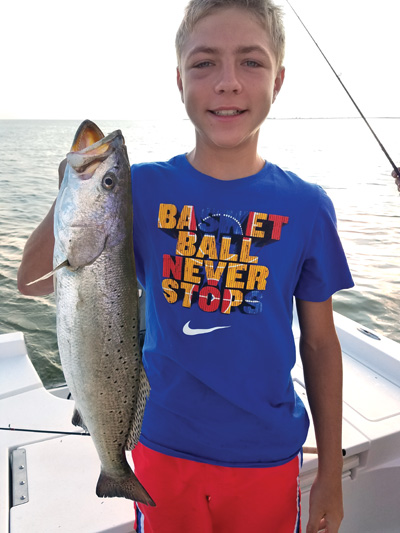 Hutch Burns with a nice trout.

We all can remember sitting down and chatting with our parents and grandparents as a youth. My conversations with them would usually be about memories of past times. The conversation always ended with them saying “Life is short; the older you get, the faster times goes by.”

Now, as I near the ripe age of 58, I understand what they meant. It only seemed like yesterday that the summer of 2018 began, and now the end is near. Fall is knocking on the door. Galveston Bay is about to go into a transition period. 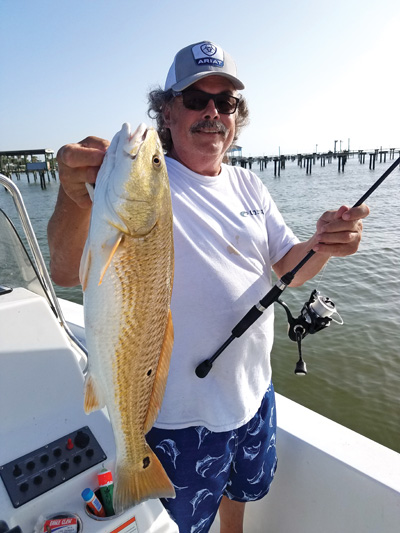 September still might feel like summer during the day but slight changes in the air temperature will occur at night. The evening and early morning air will be slightly cooler and drier compared to the previous two months. This subtle change will begin to slightly lower the water temperature in the bay. This will spark a movement of shrimp and baitfish from out of the back marshes and into the main bay. Speckled trout will transition themselves, no longer seeking the depth of deep water. The fish may remain around deep water structure but will be feeding higher up in the water column. Live shrimp fished under a popping cork 4-6 feet deep will be lethal on these trout, while the “croaker bite’ will slow down.

Come October, we will see the “transition” in full swing. Passing cool fronts will lower the water levels and temperature even more, triggering a bigger movement of shrimp and baitfish from the back ends of Galveston Bay. Speckled trout will move to these areas to forage on what is exiting the marsh. Flocks of seagulls will pinpoint the location of these fish when they are feeding. Don’t rule out drifting the reefs and structure with live shrimp under corks, keying on presences of bait and slicks in the area.

Remember not all trout make this movement. Depending on the weather and cool fronts, plenty of fish will still be caught in the areas you were fishing in August. Eagle Point Fishing Camp will have a great supply of live shrimp. Those anglers in the Kemah, Seabrook and Clear Lake area can call 281-339-1131 to check on their bait supply.

It has been a long hot summer but fishing remained good. I am looking forward to fishing these months and enjoying the cooler weather. The fish seem to bite through out the day, on any given tide. Take time away from your busy schedule and get on the water!