Do we see the change from summer to fall? I see the signs; school begins, traffic increases, daylight is shorter and football season starts. Do fish and wildlife sense the change? To those who are observant, the movement and patterns are evident. Also, this is the time of the year that new fishing and boating regulations are enforced.

A major change to boating is the use and attachment of the motor cut off switch to operators of motor boats 26 feet and less. Saltwater fishing regulation changes are the statewide enforcement of the daily bag limit of speckled trout to 5 fish per person per day. Shark fisherman will be required to use non-stainless steel, non-offset circle hooks while in state waters. The size limit for Cobia (Ling) will increase to 40 inches. Fishing licenses will need to be renewed, so make sure you are legal.

Fish will begin to change their pattern, very subtlely in September and noticeable in October. In September, their slight movement will be directly related to the decrease in daylight hours. Fish will move slightly toward shallower water as it begins to cool from less sunlight. With each passing cool front, which usually begins the middle of September, speckled trout, redfish and flounder will seek the shorelines and move towards the northern reaches of the bay. This movement is a direct reaction to baitfish and shrimp migrating from the marsh to the open bay. Remember fish follow the food chain. They go where they can eat!

Anglers will be able to pursue these fish on a variety of soft plastic baits and of course, live natural baits. For flounder, live mudfish and finger mullet will be the go to baits. Although finger mullet can be scarce, Eagle Point will have some of the best mudfish available anywhere on the Texas coast. Trout and redfish will be caught on live shrimp fished underneath a popping cork. Also for those anglers who enjoy throwing artificial lures, a variety of soft plastics will do well. Anglers searching for something big should look no further than the Galveston Jetties. The annual bull redfish run will begin in September and really heat up in October. Tarpon fisherman will have a chance to get catch the largest of these creatures along the Galveston beachfront.

You can call Eagle Point Fishing Camp at 281-339-1131 to check on their bait supply. Enjoy this time of year, fishing can be fantastic! 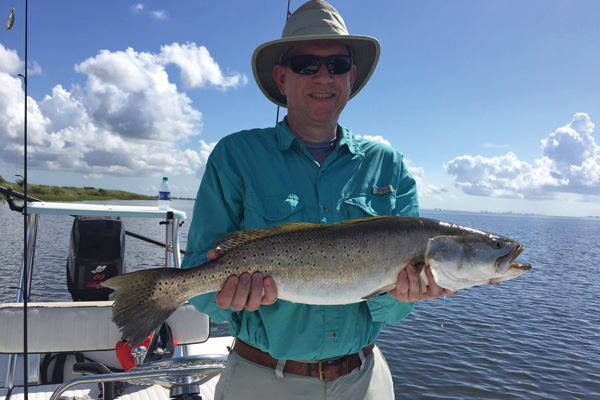 September probably isn’t the first month that comes to mind for most people when it comes to great Galveston redfish and trout fishing on the upper Texas Coast. Most of us have other things on our minds, like avoiding the heat, or getting back in the swing of things with the kids back to school. Given these distractions, fishing doesn’t usually come first.

Yes, the heat can still be oppressive in September, but unbeknown to many, the fishing can be every bit as hot. Most years just surviving July and August is enough to slow down the average angler around the bay, with high temperatures and light winds. These dog days of summer can be very tough, if you’re a drift fisher; there is not much to move the boat, or if you pole a boat in shallow water it’s just downright hot. If you like to wade fish, you might find an advantage of at least being a little cooler.

The hot and dry temperatures of July and August can truly make anglers work for their catch. There are some definite differences in where the redfish and trout will be when we hit drought conditions. It’s quite frequent that the fish will move from open bay shorelines, where salinities sky rocket, to marshes, creeks and rivers where salt levels in the water are more comfortable and food is more abundant. The extreme hot and dry conditions common in July and August help set up the subtle changes that September brings.

Even though we may see some high temperature days, there are some notable differences that seem to bring fish back to open water flats and create even better conditions for fish to feed consistently. September tends to be a month when we see a good bit more Gulf moisture coming onshore. This rain helps a great deal in not only bringing down the salt levels across the bay, but also by cooling the water several degrees during the peak heating hours of the day.

These late summer rains do a great job of lowering salinity without the harm of runoff, which carries dirty water to the bay that is often contaminated with everything from our streets, lawns and anything else that is upstream. This also differs greatly from spring rains where we often see huge amounts of river and creek run off which can have an adverse effect on the bay. The major difference with summer rains is that they fall directly on the bay, causing an immediate temperature and salinity drop that seems to excite shrimp and small baitfish activity and in turn, accelerates predator feeding.

So, we’ve managed to cool off the bay temperatures during the highest heat of the year, we’ve also lowered the salinity, just after peak salinities. Those two changes alone would help kick up feeding activity a good bit. We also see the peak of baitfish and crustacean growth and activity. Shrimp crops have grown, crabs come out of the marsh, numerous small species of fish are reaching sizes where they migrate out into open water and this all adds up to some great fishing. 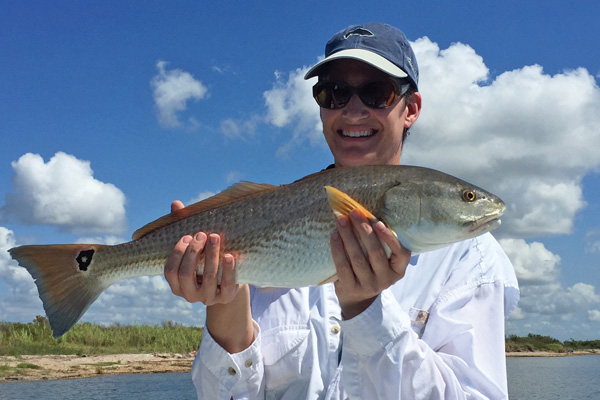 Brenda Lightfoot with a marsh redfish caught on a weedless gold spoon.

Pick your species and pick your poison

There aren’t many techniques that aren’t effective in September, whether you choose to fish with live bait, artificial, or even fly, the bays are alive both shallow and deep. I don’t really spend much time out in open or deep water, but the change in the shallows is nothing short of exceptional. Early September is almost always a great month for finding tailing redfish, not just single fish, but schools that are often bigger than other months of the year. September is also one of the peak months for me to find larger trout in shallow water.

My approach changes little throughout the year, but for those who aren’t as familiar with shallow water, take your time in your search. Don’t run your boat directly up onto the area that you intend to fish. Come off plane early and use a troll motor, push pole or wade into the area. When looking for signs of activity, shore birds are a great sign, with active mullet being equally important. Often times these fish will slick, and redfish will stir up mud. When you get into the area you want to fish, continue to take your time and cover the water thoroughly. There are a lot of days when schools of feeding fish just don’t make a big commotion. If you’re looking for tailing reds, keep in mind that they don’t usually make much noise and the surface disturbance is minimal.

One last thought, having a shallow water boat is a great thing and opens up lots of new territory that isn’t available to many people. Keep in mind that fish are shallow for several reasons; availability of food sources, protection from larger predators and possibly at the top of the list is shelter from the noise and danger of all the boats that run in open water. So, if you choose to operate your boat in shallow water at speed when looking for fish, remember that even though you may gain some short term satisfaction, in the long run you are doing more harm than good to both the fish and the habitat. Fish tend to operate mostly on instinct, but they do get conditioned to their environment and repeatedly getting run off of their shallow feeding grounds only moves them to areas that afford greater safety.